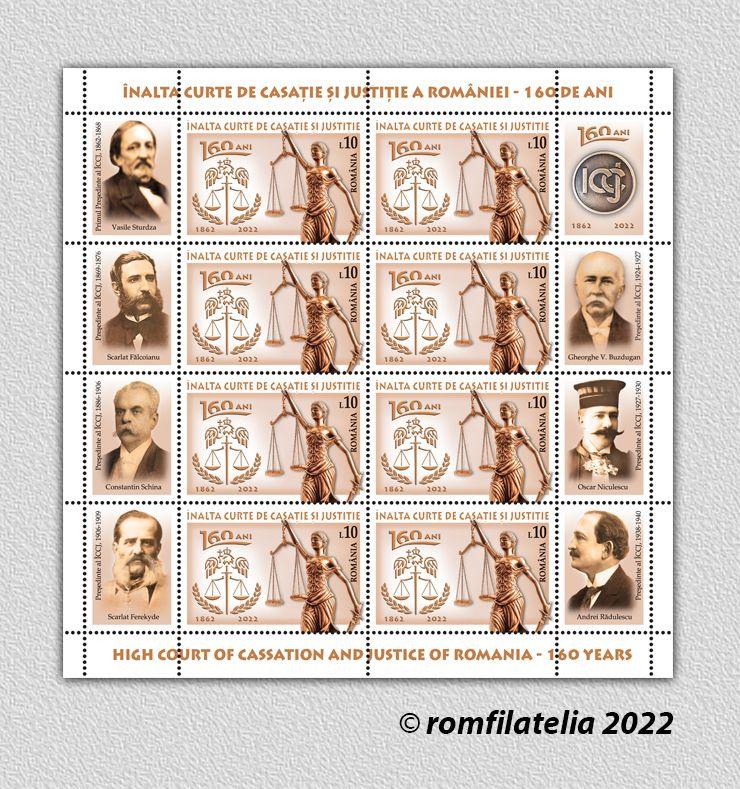 Romfilatelia introduces into circulation a new anniversary postage stamps issue dedicated to one of the most representative institutions of the rule of law, the High Court of Cassation and Justice, on the occasion of the 160th anniversary since its establishment.

The issue, consisting of a postage stamp, a perforated souvenir sheet, a minisheet and a First Day Cover, will be available to collectors and the interested public on Monday, May 30th, this year.

A brief retrospection provides us with some information on the role and place of this institution in a key position, that of unquestionably promoting the supremacy of the Constitution and the laws of justice.

The year 1862 inscribes in history the name of Romania attributed to the United Principalities, after the capital was established in Bucharest, and the two parliaments (of Moldavia and Muntenia) were reorganized into one. Anticipating the institutional transformations carried out, according to the Convention for the Final Organization of the United Romanian Principalities of August 7th, 1858, held in Paris, “a High Law and Cassation Court, common to both Principalities, would be established”.

The Law for the Establishment of the Court of Cassation and Justice of January 12th, 1861 was published in the Official Gazettes of the two Principalities on January 23rd, 1861 (Moldova) and January 24th, 1861 (Wallachia).

After establishing the organization of the institution, with three divisions: for Complaints, for Civil Matters and for Criminal Matters, on March 15/28th, 1862, the members of the Court of Cassation and Justice took the oath before the ruler Alexandru Ioan Cuza.

Under the communist regime, following the adoption of the 1948 Constitution, the High Court of Cassation and Justice became the Supreme Court, and the function of review of the legality of administrative deeds was abolished.

Following the adoption of the 1952 Constitution, the Supreme Court became the Supreme Tribunal, a name it would bear for almost four decades under the communist regime.

Following the revision of the Romanian Constitution, in 2003, the superior court returned to its historical name – the High Court of Cassation and Justice.

Since its establishment to date, the High Court of Cassation and Justice has exercised both a law court function, primarily as a court of cassation, and the power to ensure uniform interpretation of the law and even to make proposals for improving national laws.

Initially, the superior court carried out operations in the former headquarters of the High Court in Wallachia, a building considered unsuitable for its activity.

In 1890, the headstone of the future Palace of Justice was laid, and in 1895 it was inaugurated in the presence of King Carol I, Queen Elizabeth I, the President of the Council of Ministers, D. Sturdza, the Minister of Justice. E. Stătescu, and the first president of the Court, Constantin Schina. The Palace of Justice has been the headquarters of the superior court for over a century. In 2000, the headquarters of the Supreme Court of Justice was moved to the building in 25, Batiştei Street. 160 years after the commencement of the activity, the issue of ensuring a suitable headquarters for the superior court is still open.

After Romania’s return to democracy, following the Revolution of 1989, the superior court and the judiciary in general are once again connected to the fundamental values that governed their establishment and consolidation. Following the evolutionary process of the entire Romanian society, starting with 2007, the Romanian courts also became European courts, irreversibly marking the undertaking of the need of evolution of the public judiciary to the standard of independence, impartiality, quality and competence desired by citizens.

A retrospective analysis highlights that, throughout the 160 years of its history, the High Court has often been a true promoter of social evolution, ensuring the balance of social relations in times of extraordinary historical transformations; at other times, however, during the dormant periods of Romanian democracy, the judiciary and its most important court were used as an instrument of coercion and political persecution, to impose a totalitarian system. Knowing and assuming even this facet of the historical evolution of the supreme court, but also of the Romanian society as a whole, represents not only a much needed exercise of penance, but especially the guarantee that such situations will never be repeated in the future.

The images of the statuettes reproduced on the postage stamp and in the graphic ensemble of the perforated souvenir sheet belong to the “Goddess of Justice”, a symbol of fair justice.

The scarf that covers the eyes of the Goddess shows that justice must be done impartially. The balance carried in her right hand would weigh all evidence and show, in conditions of impartiality, where justice is. The sword, in her left hand, is the symbol of the enforcement of the decision resulting from the judgment. The Goddess, known as Themis, in Greek mythology, is the daughter of the deities Uranus and Gaea (of heaven and earth). Themis means the “law of nature”, considered the personification of the divine order.

Romfilatelia thanks the representatives of the High Court of Cassation and Justice and the Romanian Academy Library for the documentary and photographic support provided for the development of this postage stamps issue. 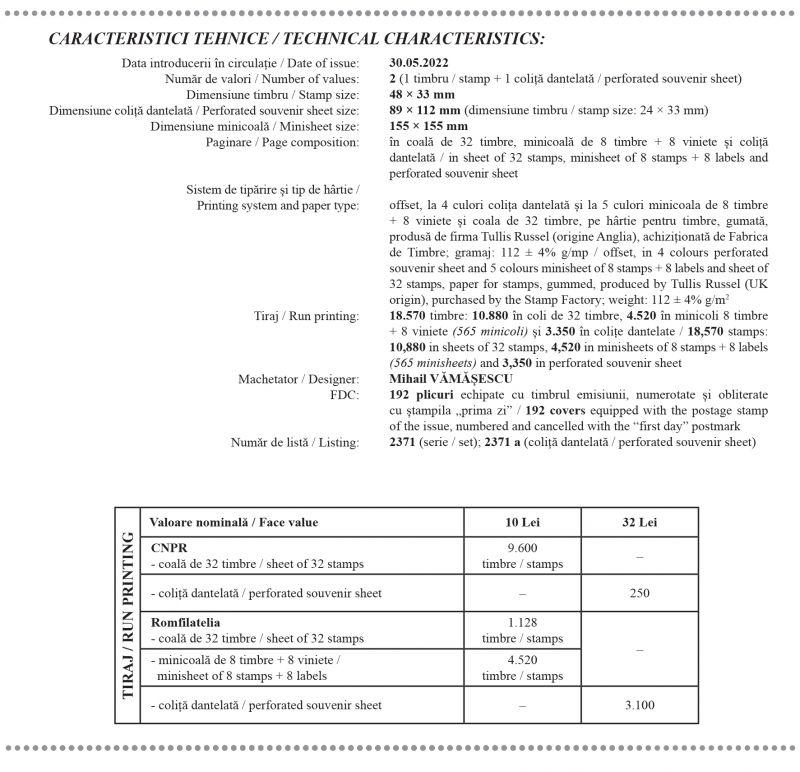