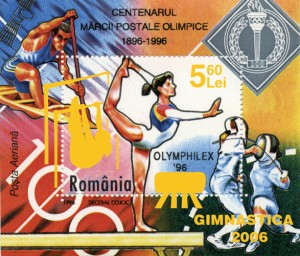 In order to bring back to the attention of sport lovers the exceptional results of Romanian gymnastics of the last decades, Romfilatelia introduces into circulation the issue Gymnastics 2006, overprint of the  perforated souvenir sheet of the issue Philatelic International Exhibition “Olymphilex ’96” Atlanta; Centenary of the Olympic Postage Stamps.
Gymnastics is one of the few sports that, in time, brought for Romania hundreds of gold, silver and bronze medals, as well as tens of European and international titles, both in the individual and team contests.
We can justly say about the Romanian feminine gymnastics team that is the team that won the most medals of the entire history of the Romanian sports.
To the successes of the feminine team, during the last two decades, the masculine gymnastics team added many occasions of joy to the lovers of
this sport, winning gold, silver and bronze medals and bringing international, European or Olympic titles for various apparatuses.
The world history of feminine gymnastics will include in its pages a great number of Romanian gymnasts, whose results made the national flag and anthem be known all over the world.
Incontestably, the most famous name is Nadia Comãneci, the sportswoman of the 20th century, the eternal queen of gymnastics. Due to that first “10” in the history of gymnastics at the Montreal Olympics, also called the “Olympics of Nadia Comãneci”, Nadia brought the art of perfection to this sport.
However, the other Romanian gymnasts cannot be forgotten either, as they brought so much glory to our country. Elena Leustean, Sonia Iovan, Ecaterina Szabo, Aurelia Dobre, Teodora Ungureanu, Emilia Eberle, Daniela Silivas, Lavinia Milosovici, Gina Gogean, Simona Amânar, Maria Olaru, Andreea Rãducan, Cãtãlina Ponor, Monica Rosu and many others contributed to the winning of the Olympic, international and continental titles by the Romanian team.
To the exceptional results of the feminine contestants, the masculine gymnastics team of the country added numberless European, international and Olympic titles. Names such as Dan Grecu, Marius Gherman, Marius Urzicã, Ion Suciu, Marian Drãgulescu, Dan Potra, Rãzvan Selariu, are only some of the golden panoply of our masculine gymnastics.
The Romanian supremacy in the world gymnastics could not have existed if our sportsmen had not been supported by “golden” trainers such as Marta and Bella Karoly, or the already legendary Mariana Bitang and Octavian Bellu.
Coming as a modest recognition gesture for the merits of the Romanian gymnastics, the gold foil overprint on the perforated souvenir sheet stamp reproduces suggestive images of two traditional contest events, i.e. vault and parallel bars, to which is added the face value of RON 5.60 and on the
perforated souvenir sheet margin the title of the issue and the year.