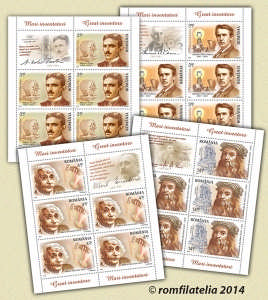 For thousands of years, curiosity and the need to find practical solutions to daily problems have inspired people and led to the development of technology and science, thus expanding our abilities to change the world. Many of the inventions of the past centuries became the milestone of nowadays world by providing answers to questions about the human body, the environment or natural phenomena.

The stamp with the face value of lei 3.30 depicts Nikola Tesla (1856 – 1943) along with a picture of the induction motor supplied with alternating current. The Serbian-American inventor’s technical imagination, supported by a fantastic capacity of concentration and intense motivation was in full display right from an early age: he believed that one day he would be able to photograph people’s thoughts. Tesla left behind more than 200 inventions. His creations included extraordinary achievements, such as the electric arc, the AC motor and AC systems. He is also famous for the ignition coil for high frequency alternating currents. Also, Tesla introduced the concept of microwave. He had a strong intuition of electricity and radio waves, which allowed him to design functional machines.

On the stamp with the face value of lei 3.60 is illustrated the portrait of the American inventor Thomas Alva Edisson (1847-1931), known as “The magician of Menlo Park” together with his most famous invention: the incandescent filament bulb, epochal discovery without which we cannot imagine the present. A true autodidact, Edison contributed to the wellbeing of humanity through a series of inventions in telegraphy, telephony, electricity, cinematography and mechanical sound recording. He has kept his belief in self-improvement throughout his life, this accompanying him permanently in his experiments designed to contribute to the scientific and technological development of his time.

On the stamp with the face value of lei 4.30 is represented the portrait of the great theoretical physicist Albert Einstein (1879-1955) with the famous equation E = mc² of the Theory of Relativity, reproduced on the postmark.

A German-born American physicist, he showed a curiosity for nature and an innate ability to understand difficult mathematical concepts from a young age.

In 1905, he published his most important work, “On the electrodynamics of moving bodies”, which would later be known as the Theory of Relativity.

After 1919, Einstein, famous worldwide, advocated international disarmament and a world government. Although Einstein was much devoted to political and social causes, science was always on the forefront, thus confirming one of the ideas in which he believed, namely that only the discovery of the Universe’s nature would have a lasting meaning. His writings include: Relativity: the special and general theory(1916), The world as I see it(1934), The Evolution of Physics(1938) and From my past years (1950).

The stamp with the face value of lei 14.50 depicts the “Master of the Renaissance”, as Leonardo da Vinci was also called (1452 – 1519), along with one of his creations, a mechanical system to irrigate the farmland. Leonardo da Vinci is part of the Renaissance movement, standing out among other inventors of the time through both the difference in method and vision, and his skills that made him excel in many areas such as painting, sculpture, architecture or engineering. His main inventions are different types of machines used both for the protection and the siege of a city, his work having been closely related to the socio-political context of the Italian states and the conflict relationship between them. His notes reveal a large number of inventions, among which the hydraulic pump, the submarine, the chariot, the ball bearing, the diving suit, the rotating bridge, flying mashines, self-propelled mashine, etc.

On the First Day Cover is illustrated Archimedes, the famous scholar of the ancient world. His accomplishments are part of many scientific fields: mathematics, physics, astronomy, engineering and philosophy. He is known especially due to Archimedes’ principle, which he described in his treatise On Floating Bodies. This principle states that a solid body immersed in a fluid is pushed upward by the fluid with a force equal to the weight of the fluid displaced by that body. Other writings of Archimedes: On the Equilibrium of Planes, Measurement of a Circle, On Spirals, On the Sphere and Cylinder, On Conoids and Spheroids, Cattle Problem, The Sand Reckoner, The Method of Mechanical Theorems.

Romfilatelia thanks Mr. Aurel Tudorache, engineer, for the support granted in the accomplishment of this postage stamp issue.
Issue date: 2014-12-17 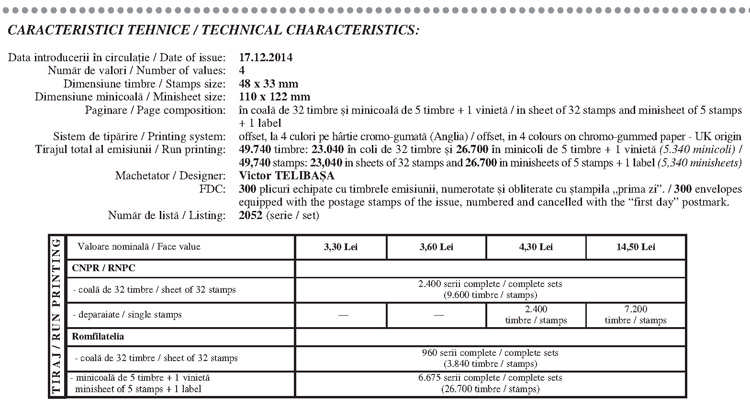