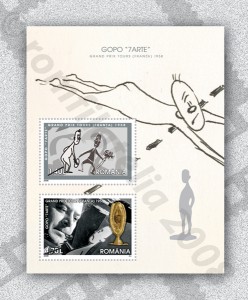 50 years ago, during the Film Festival in Tours (France), „7 Arts“, a cartoon movie made by Ion Popescu-Gopo, won the Grand Prix. 50 years ago, during the Film Festival in Tours (France), „7 Arts“, a cartoon movie made by Ion Popescu-Gopo, won the Grand Prix.
For remembering this major event for the Romanian cinematography, Romfilatelia celebrates the event by the release of the postage stamps issue GOPO „7 ARTS“, Grand Prix in Tours (France) 1958.
Born in Bucharest in 1923, Ion Popescu-Gopo made his entrance by publishing caricatures in the local press in his early 16. He attended the classes of the Academy of Fine Arts in Bucharest which he never graduated but instead he did graduate an animation course in Moscow.
1949 is the year when Gopo made his way with the cartoons production The Purse with Two Coppers (Punguta cu doi bani), in close collaboration with his father and the famous Matty Aslan.
Starting with 1950, the Cinematographic Studio in Bucharest becomes a second home for him and he started working in the animation department. His next productions counted The Naughty Duck (Ratoiul neascultator), The Bee and the Pigeon (Albina si porumbelul), Two Bunnies (Doi iepurasi), Marinica, A Wealthy Fly (O musca cu bani), The Malicious Hedgehog (Ariciul rautacios), Galateea.
Unable to attain Disney’s animation movie, innovative and nonconformist spirit, Gopo created the Little Man (Omuletul), a nude character made in just several lines but who is extremely absorbed in the matters of the world.
„The moment I realized I would not be able to stand up to his technical perfection, I started creating anti-Disney animation movies. So no beauty, no color, no delicacy. The only domain I stood a chance to face him was the theme approached“- recalled Ion Popescu-Gopo about his character.
Gopo was the only Romanian film maker winning the Palme d’Or at Cannes, in 1957 for A Short Story (Scurta istorie), which Georges Sadoul described as follows: „Within ten minutes, his movie manages to shape poetical ideas in a humorous short story filled with rhythm and imagination. The fact that his movie owes nothing to Disney, nor to Grimault, nor to the Czech school, or to the Soviet school is extremely important. For the Cannes festival, this movie was a major breakthrough that had to be appreciated accordingly, being awarded the brilliance of the Palm d’Or.“
1958 is the year when Gopo reached its utmost peak with the production of „7 Arts“, film that would be rewarded with the Academy Award for the best cartoons movie within the Film Festival in Tours (France).
Here is how Gopo would sum up his beloved and award winner character: „I have created the little man from a reduced number of lines. His eyes are merely two dots; he is incapable of rolling about his eyes or make sheep’s eyes at someone. I willingly abridged my alternatives. His mouth is close to immovable. I have not taken any advantage from the expression of his face either. The theme, however, gained force.“
Even today, grace to the themes approached, grace to the Little Man (Omuletul), Gopo is a present reality and, at the same time, an everlasting one.
His character, alongside with those created by Disney, are currently just a recollection since the present cartoons have failed to reach the artistic value of the past ones and we can but rhetorically wonder: Where are the former cartoons?…

We hereby express our gratitude to Babel Communications for all the support granted for the accomplishment of this postage stamps issue.