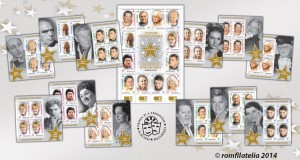 Romfilatelia continues a project dedicated to promoting cultural and artistic values that have succeeded and still succeed in instilling love for theatre and cinema.
As part of this project, the Golden Stars of Stage and Screen postage stamps issue is dedicated to some of the most beloved actors of our country.

Mircea Albulescu was born in 1934 in Bucharest. After graduating the Technical College of Architecture, he becomes an amateur artist in the theatre team of the People’s Athenaeum.
Between 1952 and 1956, he attends the “I.L. Caragiale”Institute of Theatre and Film Art from Bucharest, in Aura Buzescu’s class.
Between 1956 and 1998, he is appreciated for his activity as an actor at the Municipal Theatre, the Comedy Theatre and the “I.L. Caragiale” National Theatre in Bucharest.
His role in the play Danton written by Camil Petrescu, remains a landmark in the Romanian theatre.
He played over 70 roles in feature films and in 2005, he received the UNITER Lifetime Achievement Award.

Tamara Buciuceanu-Botez is born in Bessarabia, in the village of Tighina, in 1929. Between 1948 and 1951 she attends the courses of the Theatre Institute in Iasi, but she concludes the 4th year of study (1952) at the Institute of Theatre and Film Art, in the class of Ion Baltateanu.
She had roles in numerous theatre plays, television shows and radio theatre. She played in over 30 films, her emblematic character being Teacher Isosceles of the series The Graduates (Liceenii).
Having a mezzo-soprano voice, she played numerous scores, together with Ion Dacian, for nine years in the Operetta Theatre.
In 2004, she receives the UNITER Lifetime Achievement Award, in 2010 the UNITER Excellence Award and she has been an Honorary Member of the National Theatre in Bucharest since 2004.

Valeria Gagealov, born in 1931 in Galati, attended the Institute of Theatre and Film Art between 1950 and 1954.
Between 1954 and 2004 she plays many characters at the National Theatre in Bucharest.
Some of her memorable roles are in Of Mice and Men by John Steinbeck, a play offered to the public for 13 years, as well as the role of Sonia in the play The next room by Paul Everac, for which she was awarded the Creativity Prize in 1983.
Also, the voice of Valeria Gagealov was heard in dozens of radio plays.
Among her films, we can mention the The Mill of Good Luck, The soirée, Prince Lapusneanu’s Return, The Loneliness of Flowers. She has been an Honorary Member of the National Theatre in Bucharest since 2001.

Ileana Stana Ionescu was born in Brad (Hunedoara County) in 1936.
From 1959 to 1965 she will play various roles in the Youth Theatre in Piatra Neamt.
She has been present on the stage of the National Theatre inBucharestfor nearly 50 years. Also, she has appeared in TV theatre plays and countless feature films.
Of the many theatre roles that made her famous, we can mention The Boors by Carlo Goldoni, Titanic Waltz by Tudor Musatescu or The Jays by Alexander Kiritescu.
She received in 1996 the ACIN Romania Award, in 1998 the UNITER Gala Excellence Award, and in 2002 she became a Corporate Member of the National Theatre in Bucharest.

Draga Olteanu Matei is born in Bucharest in 1933. She started her studies at the Institute of Theatre and Film Art in 1956.
Until 1992, she played on the National Theatre’s stage in Bucharest, and then set up the company “Your Theatre” (Piatra Neamt).
We find her present in many roles in nearly 60 films. For television drama she has played over 100 roles.
However, whenever talking about Lady Chirita, we think immediately of Draga Olteanu Matei.
She is decorated with the Order of the Star of Romania, Knight rank, and is an Honorary Member of the National Theatre in Bucharest.
She was awarded the TVR (Romanian Television) and PTWB (Prime Time World Broadcast) Prize in 2003, and received the UNITER Lifetime Achievement Award in 2004.

Marin Moraru, born in Bucharest in 1937, graduated from the Institute of Theatre and Film Art in 1961, in Professor Dina Cocea’s class.
During 1961-1964, he performs at the Youth Theatre in Piatra Neamt where he plays numerous characters, and between 1965-1968, he plays at the Comedy Theatre in Bucharest.
Between 1968-1971, he performs at the “Lucia Sturdza Bulandra” Theatre, and between 1971-1974, he performs at the National Theatre, where he is an Honorary Member since 2002.
He starred in dozens of plays and movies, stunning audiences with his anthological creations.
In 2009 he was awarded the Gopo Prize for his entire career.

George Motoi was born in Kaliakra, in the southern Dobrogea (also known as the Quadrilater region) in 1936.
In 1958 he graduated from the Institute of Theatre and Film Art, in Irina Rachiteanu’s class.
He played in theatres in Piatra Neamt, Bacau, Cluj, and since 1970 he has been playing at the National Theatre in Bucharest.
At the same time he starred in over 35 feature films. One of his most remarkable role is Prince Lapusneanu in Prince Lapusneanu’s Return.
He received the Great Award of the Festival of San Remo (Italy) for his acting in the film Adela, directed by Mircea Veroiu, and in 2011 he received the Lifetime Achievement Award at the Transilvania International Film Festival – TIFF.

Sebastian Papaiani, a Romanian actor whose father is of Greek ethnicity, was born in 1936 in the town of Pitesti.
In 1960 he graduated from the Institute of Theatre and Film Art in Bucharest, and he will make his debut in the film of Mircea Muresan Your share of the blame.
In the first years after graduation he played on the stage of “Radu Stanca” Theatre in Sibiu. In Bucharest, he will be present on the stage of Giulesti Theatre, which later became Odeon Theatre, of the National Theatre and of the Comedy Theatre, as well as on the stage of “George Ciprian” Theatre in Buzau.
He played over 63 roles in film productions. He won the audience by giving life to characters in movies like Pacala, Tonight we dance in family, Jderi Borthers, Saturday night ball, At full sails!, and the B.D. movie series.

Florin Piersic was born in Cluj, in 1936, and graduated from the Institute of Theatre and Film Art in Bucharest.
Throughout his career he has starred in over 40 films and numerous plays on the stages of theatres in Cluj and Bucharest.
His film debut was the movie The Thistles of the Baragan, and the roles of Margelatu, Grigore Pintea outlaw and Anghel Saptecai outlaw are among some of his famous film interpretations.
He was often compared to the French actors Jean Marais and Alain Delon.
In 2005 he received the award for the Most beloved actor at the “Ten for Romania” Gala Awards.

Mitica Popescu was born in Bucharest in 1936, and currently plays at the Little Theatre in Bucharest.
Unforgettable are his roles in the films Glissando (directed by Mircea Daneliuc), Morometii (directed by Stere Gulea), The most beloved man on Earth (directed by Serban Marinescu) or the television series Lights and Shadows (directed by Andrei Blaier, Mircea Muresan).
Mitica Popescu received the UNITER Lifetime Achievement Award in 2009, and the Gopo Excellence Award for his entire career in 2013.

Sanda Toma was born in 1934 and graduated from the Institute of Theatre and Film Art in Bucharest with the famous show The Barber of Seville, staged by director Vlad Mugur.

Olga Tudorache was born in Oituz in 1929, and graduated from the Institute of Theatre and Film Art in Bucharest in 1951.
From 1951 to 1966 she played at the Youth Theatre in Bucharest, and after at the Little Theatre until 1978.
Starting with 1976 she was a lecturer at the Institute of Theatre and Film Art, in the drama department, and in 1990 she became a university professor, coaching six promotions of actors until 1997, when she retired.
She received numerous awards among which we can mention the UNITER Awards – Lifetime Achievement, Best actress and Popularity – in 1995, 1999 and 2002, and the Trophy of the “I.L. Caragiale” Theatre Festival in 2004.
Monumental and unforgettable, Olga Tudorache’s roles remain a landmark in the historiography of Romanian theatre and film.

The launching, on March 1st, of the postage stamps issue which emphasizes great national actors, rightfully considered the golden generation of the Romanian theatre and cinema, coincides beautifully with the one-decade anniversary of Romfilatelia.
For ten years we have tried to assign a different image to the Romanian stamp, the reward for this being the numerous awards that, each year, have ranked Romfilatelia, and implicitly Romania, in the top ten countries in the world.

We thank all the actors for their support granted in the accomplishment of this postage stamps issue. We are honoured to express our feelings of respect and appreciation for them and their entire devotion in the service of the Romanian theatre and cinema. 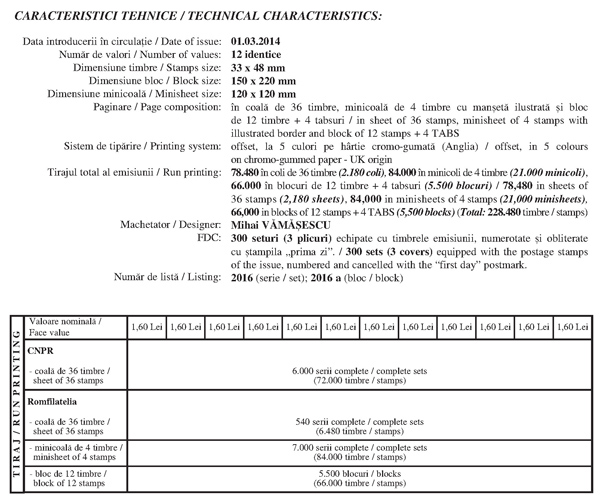