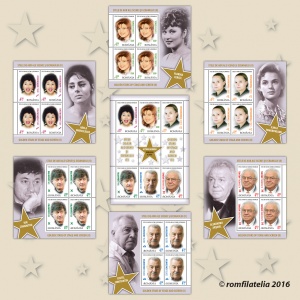 With a life dedicated to theatre and the stage, for which they were rewarded with applause, numerous awards and diplomas, Romanian actors have earned the public’s respect and attention. From now on, they will always remain in the memory of those who have appreciated them for their talent and dedication in doing their vocation.

As a sign of respect and appreciation for the Masters of the Romanian stage, Romfilatelia continues the project dedicated to them by issuing Golden Stars of Stage and Screen (II).

Adela Marculescu, a stage, film, radio and television actress, distinguished Lady of the Romanian art, poetry lover, proving faith and credibility in each role performed, she boasts hundreds of performances on the stages of the most important theatres in Bucharest and worldwide, like Brazil, Italy, Austria, Israel, USA and Canada.

Born in Aiud in 1938, she graduated in 1959 from the “I.L. Caragiale” Institute of Theatre and Film in Bucharest, the class of Professor Alexandru Finti.

She is a Lifetime Honorary Actor at the “I.L. Caragiale” National Theatre in Bucharest since 2002, Honorary Actress of the Romanian film, she took part in numerous international manifestations, in poetry recitals in Italy. Hungary, Senegal, Rusia and Germany. She was awarded the title of honorary citizen of Bucharest in 2001 and of Aiud city in 2006.

She was rewarded with the first prize and the title “Laureate” for the role of “Adela” from the movie “A guest at the dinner”, the award for her role as “Ioana Boiu”, the award for staging the poetry of Lucian Blaga and the award for Romanian Oscar in Tel Aviv in 2000, crowning her career with the special Lifetime Achievement Award – BEST International Film Festival fifth edition, Romania 2009.

On March 4, 2016, Adela Marculescu received a star on the Celebrity Alley in the Bucharest Times Square.

Florina Cercel, an appreciated Romanian theatre and film actress, was born in 1943 in Piatra Neamt. Her explosive talent, dramatic force and unique way of interpretation wowed audiences with every role she played. She graduated from the Institute of Theatre and Film in Bucharest in the class of professors Jules Cazaban, Cornel Todea and Victor Moldovan, the class of 1964.

She debuted at the State Drama Theatre in Galati, in 1964. Since 1965 she became a reference actress of the National Theatre of Timisoara, where she remained until 1972.

In 1973, she becomes an actress at the Bucharest National Theatre, where she garnered her consecration.

She debuted in films in 1970, since then being a constant presence both on screen and in television.

In 2002 she was awarded the Order of Faithful Service in rank of Knight and corporate became Lifetime Honorary Actor at the “I.L. Caragiale” National Theatre in Bucharest.

This year, Ms Florina Cercel received a star on the Celebrity Alley in the Bucharest Times Square.

Ilinca Tomoroveanu, a beloved artist of cinema and Romanian theatre, was born in 1941 in Bucharest. She studied at the Institute of Theatre and Film in Bucharest in 1964, in the class of professor Costache Antoniu.

While she was a student, she made her first film appearance in “Pride”, directed by Marius Teodorescu.

In 1964, the last year of study, she begins acting for the National Theatre in Bucharest, where she makes her entrance in “Death of an Artist” by Horia Lovinescu, directed by Horea Popescu.

After that she has an extensive acting career, both the National Theatre in Bucharest and in Romanian Television dramas and movies. She has played important roles throughout her career in the Romanian drama in scripts written by B. St. Delavarancea, H. Lovinescu, but also from the classical and modern universal plays in pieces signed by Lope de Vega, Victor Hugo, F. M. Dostoevsky, Leo Tolstoy, Alfred de Musset, Jean Anouilh, etc.

In 1990 she became a member of UNITER, and since 1999, a member of the UNITER Senate. Since 1999 she is honorary president of the Cultural Foundation “Days of Octavian Goga”.

Ilinca Tomoroveanu was awarded the “Mihai Eminescu” Commemorative Medal for her work in 2000, and The Order “The Cultural Merit” in rank of Commander in 2004. In 2014, she received from the French Republic the Order of Arts and Letters in the rank of Knight.

Since 2005 she is the artistic director at the National Theatre in Bucharest, where she continues as an actress as well.

Alexandru Arsinel, beloved comedian, made a significant contribution to theatre, television, radio and film in our country. Of the actor one speaks only in superlatives and he is seen as a master of the Romanian scene. He played in drama, entertainment and radio shows.

Alexandru Arsinel was born in Dolhasca, Suceava, in 1939. In 1962 he graduated from the “I.L. Caragiale” Institute of Theatre and Film in Bucharest.

Since 1999 he is the Director of the “Constantin Tanase” Theatre, where he starred in many shows and musicals with an extraordinary public success, having hundreds of performances.

Having a rich activity in theatre, film, television and radio drama, for all his managerial and artistic activity in the revue theatre he was awarded lots of prizes, medals and orders of which we mention: special prize “Ambassador of Romanian Theatre” at VIP Awards Gala for successful management and activity at the “Constantin Tanase” Revue Theatre, four times on the podium in the category “Best Actor” at the “Ten for Romania” Gala.

He was awarded the Order of “Cultural Merit” in the rank of Commander, being considered one of the most trustworthy Romanians and gaining a star on the Celebrity Alley.

Ion Caramitru was born in 1942 in Bucharest. He graduated from the National University of Theatre and Film, prof. Beate Fredanov’s class, in 1964. He played the role of Hamlet for his degree; a character that he will resume playing while directed by Al. Tocilescu (1986) and that will include him in the British charts of the Top 10 Hamlet performers in the world.

He played over 100 roles in theatre and films, being awarded many prizes, orders and awards, including “Best Actor of the Year” (1975, 1979, 1981, 1985), the “Aristizza Romanescu” Award (Romanian Academy), Critics Prize (International Association of Theatre Critics), Shakespeare Ambassador (British Council), Actor of Europe (Macedonia), “Nihil Sine Deo” (the Royal House of Romania), Officer of Honour of the Order of the British Empire OBE, Knight of the Order of Letters and Arts (France), order of Merit of Romania and France in the rank of Grand Cross.

He collaborated with directors Liviu Ciulei, Radu Penciulescu, Stere Gulea, Steven Soderbergh, Costa Gavras. He has directed theatre and opera shows both in the country and abroad, such as “Vlad Dracula, the Impaler” of Marin Sorescu, “Bastien and Bastienne” by Mozart, “The Merchant of Venice” and “Othello” by Shakespeare, “Macbett” by Eugen Ionescu, “Evgheni Oneghin“ by Tchaikovsky, “The Tragedy of Carmen”, an adaptation of Peter Brook and Marius Constant after Bizet.

Costel Constantin, popular actor of theatre, film and television, was born in Galati in 1942. He graduated from the Institute of Theatre and Film in Bucharest, professor Beate Fredanov’s class of 1964 and embodied the character of Laertes in “Hamlet” for his degree.

In 1965, he debuted at the National Theatre in Iasi in the role of young monk, from Jean Anouilh’s play “Becket”.

On the stage of the National Theatre of Bucharest he made a name for himself in the role of Nick with the play “Who’s Afraid of Virginia Woolf?” by Edward Albee, in 1970.

It is no coincidence that at the height of his talent, all would recommend him the most suitable for the role of Stephen of “Sunset”. Thus, the role of the voivode was for Costel Constantin the triumph of a great career.

Brilliant actor, he proves his genuine talent with remarkable roles, played in both film and theatre, as in “Blue city gates”, “The Sign of the Serpent”, “Waiting for a Train”, “Pepe and Fifi”, “Crecinski’s wedding”, “Electra – an ancient trilogy”, “A Lifetime of Love”, “One Flew over the Cuckoo’s Nest” and many others.

A Lifetime Honorary Actor of the National Theatre in Bucharest, Costel Constantin is part of the national stage’s great master’s generation.

In 2003 he received the National Award for Best Actor in the role of Vulpenaru in “Murder for earth”, directed by Grigore Gonta.

The forementioned actors played in hundreds of performances, were applauded by thousands of Romanians and their names will remain in the history of the Romanian theatre, television and cinema, being recognized as high representatives of the scene, who unforgettable presences bathed in the spotlight.

We thank all the actors for their support granted in the accomplishment of this postage stamps issue.

We are honoured to express our feelings of respect and appreciation for them and their entire devotion in the ­service of the Romanian theatre and cinema. 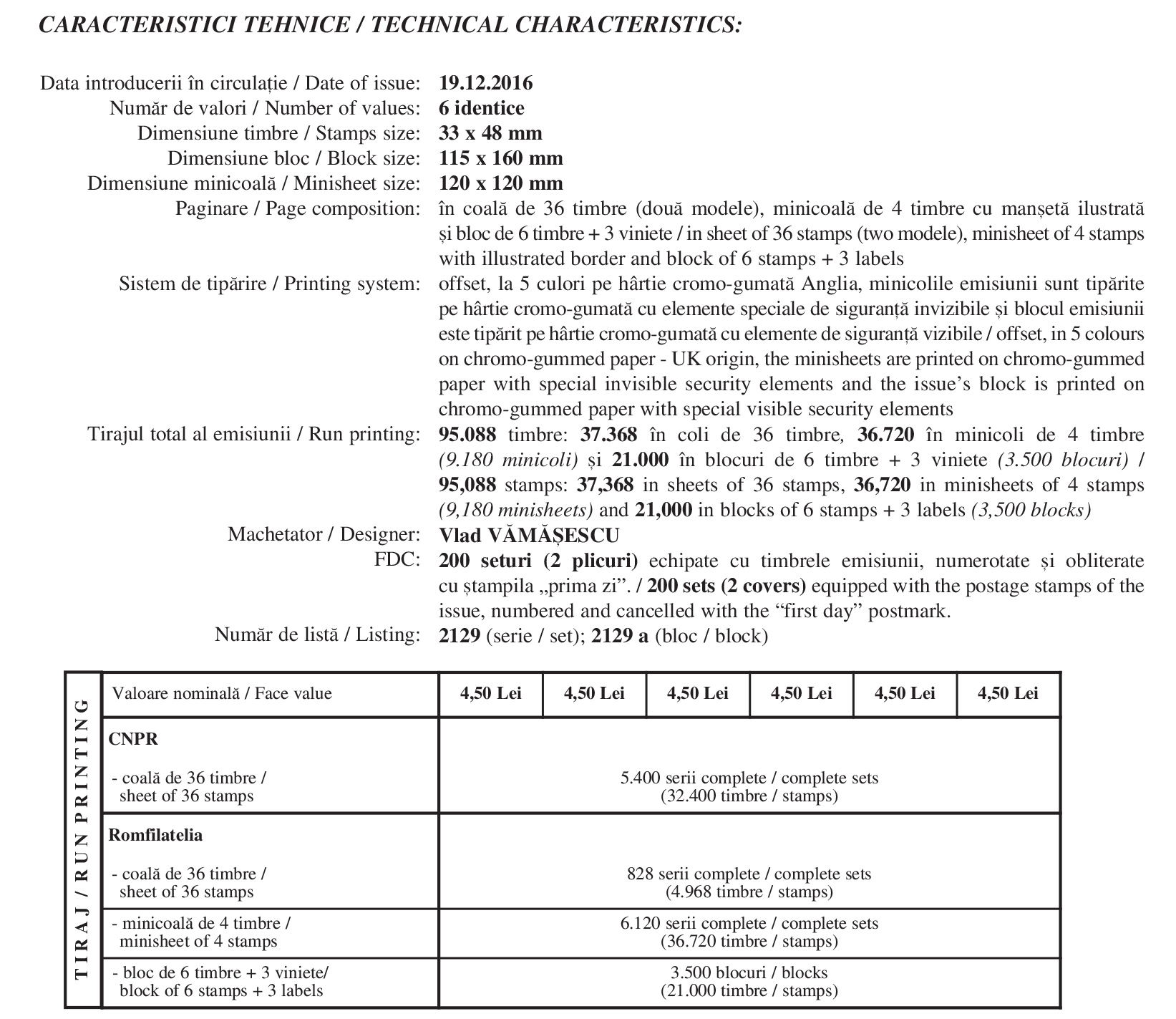