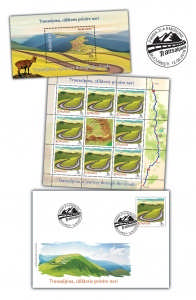 “The journey up here was worthy”, “This is Transalpina and is absolutely amazing”, “You have the wonderful feeling of being on the world’s roof”, “Literally, it is a road that once seen, it can never be forgotten”, is just a part of the feedback given by the team of the British EVO Magazine on one of the most admired and exploited Romanian sights – Transalpina, the most beautiful and the highest road in our country.

Lost in the mist of time, the legend of Transalpina starts more than 2000 years ago, when, in terms of time maps, the route was used by Romans on their way to Sarmisegetusa, while fighting against the Dacians. Also known as the “Devil’s Path”, Transalpina was initially no more than a small path used by shepherds, but nowadays, beauty seekers can find areas where history has left visible traces over people and places.

Understanding the importance and unique character of this road, Romfilatelia dedicates to
“the country beyond mountains” the latest postage stamp issue suggestively entitled Transalpina,
a journey through the clouds. Available starting with Friday, August 12th, 2016, in Romfilatelia’s shops in Bucharest, Brasov, Bacau, Cluj, Iasi and Timisoara, the issue thus joins the philatelic projects that promote our country, the uniqueness and beauty of the Romanian lands.

Located at over 2000 m high, this jewelry – road was also called the “King’s Road”, since King Carol II inaugurated it by crossing it along with the royal family and the Prime Minister of that time, Gheorghe Tatarescu.

Transalpina is not just a sensational high road, with breathtaking landscapes, but also by taking this route one can visit many impressive sights, such as Oasa Lake, Galcescu Lake, Rosiile Lake, Muierilor Cave, Polovragi Cave.  At the same time, the stunning forms of relief met on the way, together with the flora and fauna specific to high mountainous area complete the picture that is revealed to the traveler, attracting him with the beauty and wildness of the nature.

The stamp with the face value of lei 8.00 and the perforated souvenir sheet of the issue, having the face value of lei 15.00, stand as an open invitation for a public of all ages to go on a metaphoric journey through the clouds. Characterized by a palette dominated by green, blue and brown, the two elements refer, in a stylized graphics, to this road connecting Oltenia and Transylvania and crossing Parang Mountains from North to South. Likewise, the illustrated border of the minisheet completes the issue’s graphic concept, replicating on map “the best driving road in the world”, as it was named by the team of the famous show Top Gear.

The issue is completd by a first day cover and as a page composition were used the sheet of
28 stamps, the minisheet of 8 stamps + 1 label and the perforated souvenir sheet.

Romfilatelia thanks the National Company of Motorways and National Roads in Romania and
Mr. George Avanu for the documentary support granted in the achievement of this postage stamp issue.