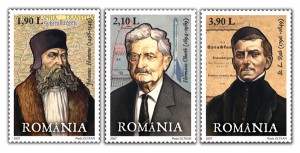 Romfilatelia, the specialized company  in editing and trading Romanian postage stamps  introduces into circulation the philatelic issue German Personalities in Romania.    Romfilatelia, the specialized company  in editing and trading Romanian postage stamps  introduces into circulation the philatelic issue German Personalities in Romania.
The new postage stamps issue will introduce three of the most prodigious German representatives of cultural society in Romania, namely Johannes Honterus, Hermann Oberth and Stephan Ludwig Roth.
Johannes Honterus (1498-1549) – portrayed on the stamp with the face value of  RON 1.90.
Son of a tanner, Johannes Honterus was to become one of the most prodigious persons in the medieval town of Brasov. Johannes Honterus is the author of the “Rudimenta Cosmographiae” (1530), widely spread within the European cultural centers and of the “Latin Grammar” (1530). Honterus has also elaborated the first map for the Transylvanian region (1532), set up the printing house in Brasov, and reorganized the social science high school that presently bears his name. In his “Rudimenta Cosmographiae”, Johannes Honterus exhibited the unity of the three Romanian principalities in his map labeled “Dacia”, envisaging, at the same time, the Romanian ancestors´ continuity in the region.
Hermann Oberth (1894-1989) – portrayed on the stamp with the face value of  RON 2.10.
He was born in Sibiu but attended secondary school at the Uphill School (Sighisoara). He was only 13 years old when he designed a rocket intended to transport people to the moon. In 1917 he designed the first model of space rocket in the world that was bound to use liquid fuels (alcohol and oxygen). In 1923 he published his “Rocket to Interplanetary Space” written in Romanian in which he revealed his ideas about building a vehicle that could enable real human space flight, being the first in the world to advance such theory. The book comprised all his technical and scientific documentation for space travel that have been made use of ever since. In 1938 he was offered a lector position with the University of Vienna where he conducted an extensive didactical and research activity until 1933. In 1941 he was assigned to work for the Peenemunde German Center where he set up the high amplitude rocket, the first in the world.
In 1962 he definitively established in Feucht (Germany), where he set the foundation for the Hermann Oberth Society whose goal was rocket usage for pacifical purposes. That was the place where he found his eternal peace in 1989.
On 16 July, 1969, when the Saturn 5 rocket, bearing the Apollo 11 cabin with which the first astronauts aselenized, was launched, Wernher von Braun, in the presence of his teacher Hermann Oberth, acknowledged to the media: “The instance when a human being has first stepped on a celestial body was brought about by Hermann Oberth´s findings, the mastermind of space navigation.”
Romfilatelia thanks for the support to Mrs. Erna Roth-Oberth, the daughter of the scientist and to the Mr. Dr. Eng. Hans  Barth, the biographer of  Hermann Oberth.
Stephan Ludwig Roth (1796-1849) – portrayed on the stamp with the face value of RON 3.90.
Humanist, Lutheran priest, and pedagogical reformer, he was born in 1796 in Medias, son of Transylvanian reverend and schoolteacher Stephan Gottlob Roth. He completed secondary education attending classes in different secondary schools located in Medias and Sibiu. In 1821 he became a teacher at the secondary school in Medias and in 1831 he was appointed chancellor of the educational unit. When in January-February 1842, “Dieta” in Cluj approached the languages issue, Stephan Ludwig Roth wrote “Struggle for Transylvanian official language precedence”, that would later on, in May 1842, be published, paper work that causes Hungarian officialdom to respond hostilely. The following is an excerpt from the famous answerback directed at “Dieta”: “I do not see the need to enforce an official language for our country since we already have one. That is neither German nor Hungarian but Romanian”. During the revolutionary outcomes of 1848 and 1849, Romanians together with Saxons in Transylvania stood on the same side of the barricade while Stephan Ludwig Roth, the one that preached out loud one peaceful coexistence between all nationalities in Transylvania had paid with his life for this strong belief, being shot to death in May 1849, on the plateau of the Citadel in Cluj. 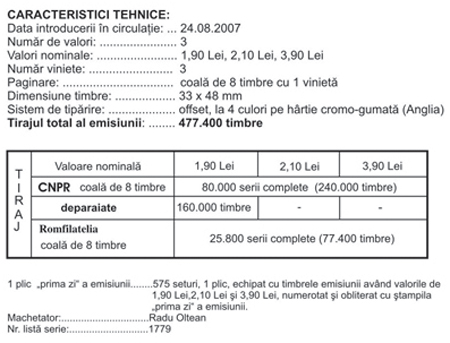