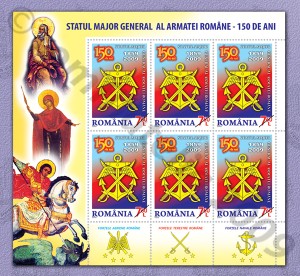 After the Union of 1859, the Ruler Alexandru Ioan Cuza decided to set up the General Staff of the Unified Principalities Armed Forces; this (i.e. General Staff) was at that time subordinated to the two ministries of war belonging to the two respective states. The first chief of the General Staff was Colonel Grigore Gardescu. The High Decree no. 410/1867 established as a distinctive sign for the Staff Corps Officers “the golden lightning applied on the coat’s collar of the daily and celebration attire”.

On 6th of April 1877, once with the mobilization of the Romanian Armed Forces by the High Decree no. 491, it was set up the General Headquarters with a role in the coordination of the military operations. Following the experience gained during the Independence War, based on the Law of July 10th, 1878 it was created the Army Superior Council including also the Chief of the General Staff.

During its 150 years of existence the General Staff has been the decision-making structure which was taking all the major decisions with high impact on the Romanian military body and moreover, on the defense policy of the state.

After 1990, the Great Staff ( that later became, in 1994, the General Staff) contributed to the transformation of the Romanian Army into a modern, well – trained and well – equipped organization at a level of  NATO standards, able to ensure the territorial security and to participate in missions outside the borders, too.

The participation of the Romanian Armed Force’s militaries in the terrorism combat, Partnership for Peace or humanitarian missions stands for the proof of their professionalism.

These international coalition-type missions or those conducted under NATO, EU and UN mandate attest the accomplishment of the commitments Romania made as a member of the international community.

Today, according to the Law no. 346 from July 21st, 2006 (art. 12), the General Staff provides for the command, planning and making operational of the three Services of the Romanian Armed Forces (Army, Air Force and Navy). Therefore the responsibilities falling under the General Staff’s  competency are: the readiness and mobilization of the armed force, conduct of the joint operations, training of the commands and troops,  the basic and specialty training active-duty and reserve military personnel, individual career management of the military personnel, weapon systems planning, standardization, implementation of the command and control, communications, computers, intelligence, IT, surveillance, recognition, logistics and infrastructure, conduct of the international military operations, religious assistance in the Ministry of Defense and the signing of the technical agreements with other states’ armed forces, promoting the military culture and civic education specific values.

We warmly thank to the Historical Department of the Romanian Army and the General Staff for the documentary support granted in the accomplishment of this postage stamps issue.