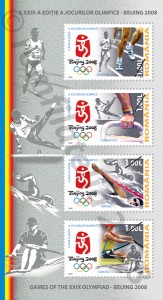 The route of the Olympic flame will cover a distance of over 135,000 kilometers and will last for approximately 130 days. It will cross five continents and reach the highest mountain peak in the world, Everest.
On August 8th, 2008, at 8 PM, the National Stadium in Beijing will host the opening ceremony for the 29th edition of the Olympic Games. We should note that the Chinese culture associates prosperity with that number 8.
Harmoniously combining the graphic exquisiteness with the nobility of the sports,
the postage stamps of the issue (illustrating such sports as: athletics, gymnastics, swimming, and rowing) are meant to be an artistic transposition of the essence and spirit of the Olympic Games and, at the same time, the way they are interpreted by sport lovers in Romania, a metaphoric liaison to the People’s Republic of China, the host country of the Olympic Games. 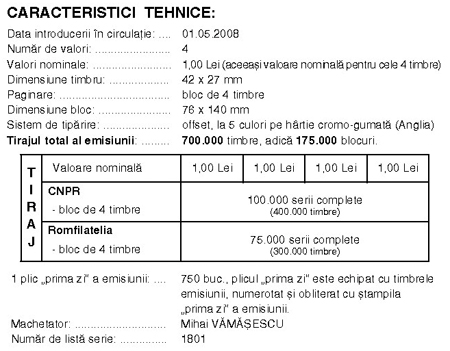