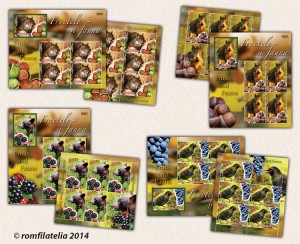 Romfilatelia dedicates a special postage stamp issue to fruits and fauna from the Carpathian Mountains of Romania, illustrating the ancestral relation between the animal and vegetal kingdoms; the four pairs of elements selected for the topic of the issue harmoniously link wild fruits and animals.

At the intersection of five biogeographically regions,Romaniaranks as one of the richest lands through its biodiversity, its diversified natural wealth encompassing over 33,000 species of animals and 3,700 species of plants embellishing and enriching Romania’s natural heritage.

The postage stamp with the face value of lei 1.40 illustrates an image cherished by children, parents and grandparents alike: the squirrel and the hazelnuts. Although lonely animals, squirrels, existing in over 300 species all over the world, can be found in the most diverse habitats, from crowded cities to people’s gardens, forests and plains; Sciurus vulgaris is the most common species that lives in Romania. The squirrels’ custom of hiding food is well known everywhere, as they hide in summer the acorns, the nuts and the hazelnuts that will be used as food in winter.

Hazelnuts were used since ancient times both as food and medicine, in the ancient world of the Greeks and Romans, the tree being the symbol of abundance, family, peace and wellbeing.

The wild boar and the acorns compose the image found on the postage stamp with the face value of lei 2.00. Known also as “Glican” in Transylvania, the wild boar can be found in the Romanian forests from the Danube Delta to the woods of the Carpathians. Encountered in hunting stories and meaningful lyrics, the wild boar embodies both power and violence. Its nourishment is primarily made of plants, including the fruits of wild trees such as acorns or beechmasts. The oak forest occupies an important surface of the lowlands inRomania, but sometimes extends to 1500-1800 m altitude.

Acorns – the fruits of the oak – are consumed by several animals, some varieties being also marketed and consumed by people in Latin America andMorocco. They are greenish-brown, bitter or sweet, and rich in starch. Acorns contribute to the improvement of the soil, through the breaking process participating in the formation of the humus.

On the postage stamp with the face value of lei 8.10 are jointly depicted the bear and the wild berries. The brown bear is considered an animal belonging par excellence to the Romanian lands, with a constant presence in the Romanian folk and mythology, mentioned by Mircea Eliade as a totem of our Dacian ancestors. Currently, in Romania lives a population of about 6,000 bears, the brown bear being found all along the Carpathian Mountains, its omnivorous diet including, amoung others, wild berries.

Every year, Romania’s mountains turn into a heaven of sweet fruits that become exquisite food both for animals and people in love with raspberry, blackberry, blueberry and red bilberry, redcurrants, sloes, rosehips and sea-buckthorn.

On the postage stamp with the face value of lei 14.50 is illustrated the common starling next to a grape. A migratory bird, considered a frequent presence in Romania, coming in spring and leaving in autumn, the common starling prefers plains and forests alike, being both the farmers’ friend and enemy. Although a fruits lover, being able to produce damages to orchards and vineyards, insects remain its favourite food, playing thus an important role in controlling the population of pest insects. Vines have been known inRomania since Antiquity, grapes being widely grown throughout our country.

Our country’s vegetation and fauna consecrate Romania’s place within the universal heritage of nature, not only through the gene bank of thousands of species of plants and animals it shelters, but also through the traditions, beliefs and customs born from the people’s relation with nature, and transmitted over the centuries to coming generations.

The common starling inspired the work of artists around the world. W.A. Mozart owned a starling for three years and reproduced its song in his Piano Concerto No. 17.

Romfilatelia thanks Corresponding Member Acad. Dr. Dumitru Murariu and photographers Dragos Cristescu, Silviu Matei and Daniel Petrescu for the documentary and photographic support granted in the accomplishment of this issue of postage stamps.
Issue date: 2014-09-05 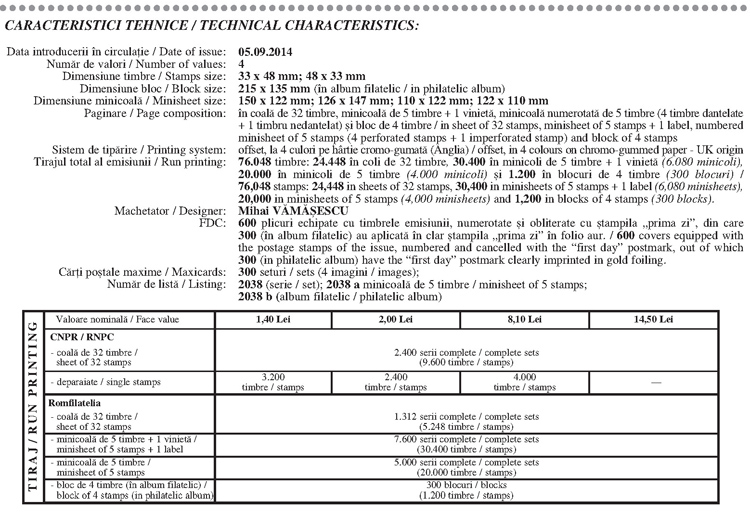