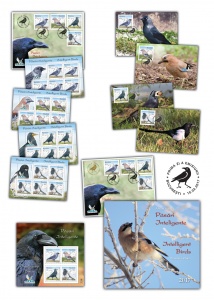 “Where the peacock is missing, the crow is the most beautiful bird.” (Old Romanian proverb)

There is the temptation to say that intelligence, in other words, the ability to understand and solve situations and problems based on previous experiences, is a specific human feature. Recent studies and experiments prove that several animals and birds dismantle this prejudgment.

A common test of intelligence is the bypass test, where a glass barrier sits between the bird and a desired object, such as a piece of food. Most mammals can discover that the objective is achieved only if you first walk away from the target. While poultry fail to pass this test, many birds from the Corvidae family are able to easily solve the problem.

The latest Romfilatelia project offers more information about bird intelligence, by offering to the public an interesting topic, combined with one of the most appreciated themes among collectors, fauna. Under the name Intelligent birds, the issue is available starting with Friday, February 10th, 2017, in Romfilatelia shops in Bucharest, Bacau, Brasov, Cluj-Napoca, Iasi and Timisoara.

Comprising of four stamps, the issue presents birds of the Corvidae family, which are found in our country. Thus, the Eurasian jackdaw or European jackdaw (Corvus monedula), illustrated on the stamp with the face value of lei 2.50, is one of the smallest birds belonging to this family, being widespread in Western Europe, but can be found less often in south, in Northern Africa and Western Asia.

They are glib birds, giving the feeling that they chatter a lot among themselves, always making much noise. Without much effort the jackdaw learns to copy words and other sounds.

The Eurasian jay (Garrulus glandarius), illustrated on the stamp with the face value of lei 4.50, is widespread in Europe, Africa and Western Asia and is a sedentary species, which means it can be seen in Romania throughout the year. The Eurasian Jay is not as easy to spot as its Corvidae cousins, given that it is extremely cautious when approaching human settlements. In winter, due to a lack of food, it can be seen more often in villages and city parks.

The Rook (Corvus frugilegus), illustrated on the stamp with the face value of lei 8, is a great consumer of nuts which it drops onto the ground to break them and then nibbles the core. They are also sociable birds that inhabit and nest in large groups, called colonies, being impressive in number. They can be sedentary or migratory (in disparate groups and different directions), depending on the low temperatures in the region where they live and the favorable conditions for food.

The Eurasian magpie or common magpie (Pica Pica), illustrated on the stamp with the face value of lei 15, can be seen in the lowlands, as well as in mountain areas. Compared to other members of the Corvidae family, magpies are not strong flyers and therefore spend a lot of time sitting on tree branches or on the ground. Due to its characteristic black and white plumage, it’s easily recognized even by those with little knowledge of birds. The magpie is a diurnal bird which starts being active shortly before sunrise and finishes its activities at sunset.

The issue is completed by a first day cover and a set of 4 maximum cards, and as page composition were used the sheet of 28 stamps with 8 pairs tête-bêche, the minisheet of 5 stamps + 1 label and the block of 4 stamps (in philatelic album).

The Raven (Corvus corax), illustrated on the first day cover, has proven tactical skills as it is able to retain information on its intentions and therefore manipulate the attention of other birds, either to prevent or to acquire advantages.

The special product of the issue is the philatelic album, created into a limited edition of 245 pcs. and equipped with the block of 4 postage stamps of the issue and the First Day Cover having the “first day” postmark clearly imprinted in gold foiling. Each element is numbered from 001 to 245.

Romfilatelia thanks the Romanian Ornithological Society and Mr. Octavian Chende, Mr. Cristian Mihai and Mr. George Avanu, photographers, for their documentary support granted in the creation of this postage stamp issue.