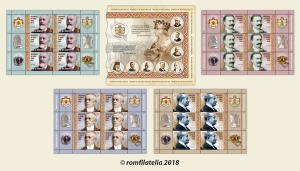 The Centenary of state unity accomplishment represents an apogee moment of the Romanian nation’s development. One of the oldest people of this continent’s area has thus reached fulfilment. For centuries, Romanians had been living in different states and also under foreign reigns. In 1859, the two Romanian states, that had been formed in the 14th century, united through the double election of Alexandru Ioan Cuza and, at the same time, the process of integration in modernity had been emphasized.

Romania – the state that resulted from this historical process – owned its Independence through battle, in 1877, but in the same period, Romanian territories were under the dominance of some empires, namely the Austria-Hungarian and the Russian ones. To reach complete unification, Romania entered the World War I under very complex conditions, carried out an extremely difficult war with the Central Powers, isolated from the majority of its allies, with important human and material loss, and from 1917, when the big Russian overthrow took place, it had to face new issues. Forced to conclude an armistice and then separate peace, however not ratified by King Ferdinand, it took up arms and numbered along the victorious powers.

The losses had been important, but there was a unanimous wish of reaping the rewards of the great effort and a burning aspiration towards unification. The Romanians from the territories integrated in the empires were seeing Romania as their virtual homeland and, under the conditions of the empires’ disaggregation, they successively pronounced in favour of their inclusion in the Kingdom of their nation. Their wish for unification was expressed through impressive assemblies in Chisinau, Cernauti and Alba Iulia, the Great National Assembly in Alba Iulia on December 1st, 1918 representing the peak moment of the historical process. The supreme moment took place then, by the unification of Transylvania with the Romanian nation ensemble.

It is an everlasting day and the century that has passed since then and that we honour and celebrate has demonstrated its place in the national history. Not all of the unification processes that took place still exist in Europe, but apart from the loss of Bessarabia, today a self-governing neighbouring state, also mostly Romanian, Romania from December 1st, 1918 has undergone difficult challenges, but has resisted and continues to assert itself as a unitary state.

One hundred years of history have gathered up difficult moments, some tragical ones, but however Romania has proved to be a durable ship of the nation. It is an entity of the world and, first of all, of Europe. The Centenary represents not only an occasion for analysis, but also an impulse to follow the ancestors, those who have brought about the unification and country building, who have found the ways of Romania’s future in work, honour and mostly love for the country. Anyhow, one hundred years represent the foundation of the future, of an advance to be served further on, in order to state the historical place of this country among the states of the world.

To honor the memory of the personalities who contributed to the Great Romania’ achievement, Romfilatelia introduces into circulation the postage stamp issue Founders of the Great Union, part two. On the elements of the issue are reproduced portraits of patriots who fought to fulfil the national ideal of the Romanians.

On the stamp with the face value of Lei 2 is illustrated the portrait of Gheorghe Pop de Basesti (1835-1919), a fighter for the Romanians’s rights in Transylvania, who dedicated his entire life to the national ideal. He entered the movement of Romanians in Transylvania earlier, in 1866, when he took part in the demonstrations organized by ASTRA in Sibiu, for the awakening of the national conscience. Since 1872, for nine years, he had been a deputy in the Parliament in Budapest, where he had been remarked for the Transylvanians’ cultural and political interests support. In 1880, during a conference held in Turda, he proposed the union of all Romanians from Austria-Hungary in a single party, proposal that materialized the following year in the founding of the Romanian National Party in Transylvania. Gheorghe Pop de Basesti became later one of the Memorandist movement leaders (1892-1894), which demanded the sovereignty of Transylvania and additional rights for the Romanian nation in Austria-Hungary. The Hungarian authorities arrested him after the trial in Cluj (1894), but he was not intimidated. He was a passionate patriot until his death and, as a sign of respect, he was designated president of the Great National Assembly in Alba Iulia, on December 1st, 1918.

On the stamp with the face value of Lei 5 is reproduced the portrait of Alexandru Vaida-Voevod (1872-1950), one of the representative politicians of the Romanians in Transylvania. His family was involved for generations in the national struggle, and the young Alexandru continued the tradition of the forefathers, even from his years as a student. At the beginning of the 20th century he supported the national cause as a journalist and organizer of protests against anti-Romanian politics promoted by the Hungarian government. From 1906 until 1918 he was a deputy in the Parliament of Budapest, coming to the fore for his combativeness in the national issue. In October 1918, he read in the Parliament of Budapest the declaration by which the Romanian nation declared itself “free of any foreign influence”. He attended the Great National Assembly in Alba Iulia and was among the four delegates who handed over the Resolution of Union to King Ferdinand I, for ratification. In December 1919, he was appointed Prime Minister, but he had a short commission, because in January 1920 he went abroad to contribute to the international recognition of the Great Union.

The portrait of Iancu Flondor (1865-1924), a unionist leader in Bukovina and the Union proponent of this province with the Motherland, is illustrated on the stamp with the face value of Lei 8.50. At the end of the 19th century, Flondor, along with other young Bukovinians, decided to take the initiative of founding a Romanian national movement. The young generation abandoned the policy of collaboration with the Austrian authorities, in order to hold the national awaking of the Romanian majority in Bukovina. During the World War I he refused to take refuge in Romania, being forced to confront with both the imperial authorities and the Ukrainian nationalists. In the autumn of 1918, Flondor asked the Austrian Governor of Bukovina to surrender the power to the Romanians and, in the face of his refusal, convened a General Congress of Bukovina, made up of all the nationalities of the region. Having as Chairman Iancu Flondor, the Congress unanimously voted in the meeting of November 28th, 1918, the motion of the Union with the Kingdom of Romania. After the Union, Iancu Flondor coordinated the installation of the Romanian administration in Bukovina.

The stamp with the face value of Lei 11.50 is illustrated with the portrait of Take Ionescu (1858-1922), one of the most appreciated speakers in the Romanian politics, liberal and conservative alike, with a decisive role in the achievement of the Great Union in 1918. He studied Law in Paris, where he obtained the Ph.D. degree, and after returning to the country he worked in the National Liberal Party. Unhappy with the domination of the Bratianu family, he enrolled in the Conservative Party, but again, he did not accommodate there, creating a conservative-democratic dissidence. He fought for Romania’s alliance with the Entente in the World War I, and in December 1916 he entered the refugee government in Iasi. Concerned about the prospect of a humiliating peace with the Germans, in 1918 he left for Paris, where he brought important services to the national cause, as president of the National Council for Romanians’ Unity. He remained in the capital of France during the peace negotiations and lobbied in front of the great Western chancellery in order to obtain a favourable situation for Romania.

Romfilatelia thanks Mr. Ioan-Aurel Pop, the President of the Romanian Academy and the Academicians Dan Berindei and Razvan Theodorescu, the National Archives of Romania, the Romanian Academy Library, the National Military Archives, the Museum of Bukovina from Suceava, the Greek Catholic Eparchy “Saint Basil the Great” of Bucharest, professor Corneliu Andonie from the National Military Museum and Mr. Emanuel Cosmovici from the “Bunavestire Programs” Association, for the documentary and photographic support granted for the achievement of this postage stamp issue. 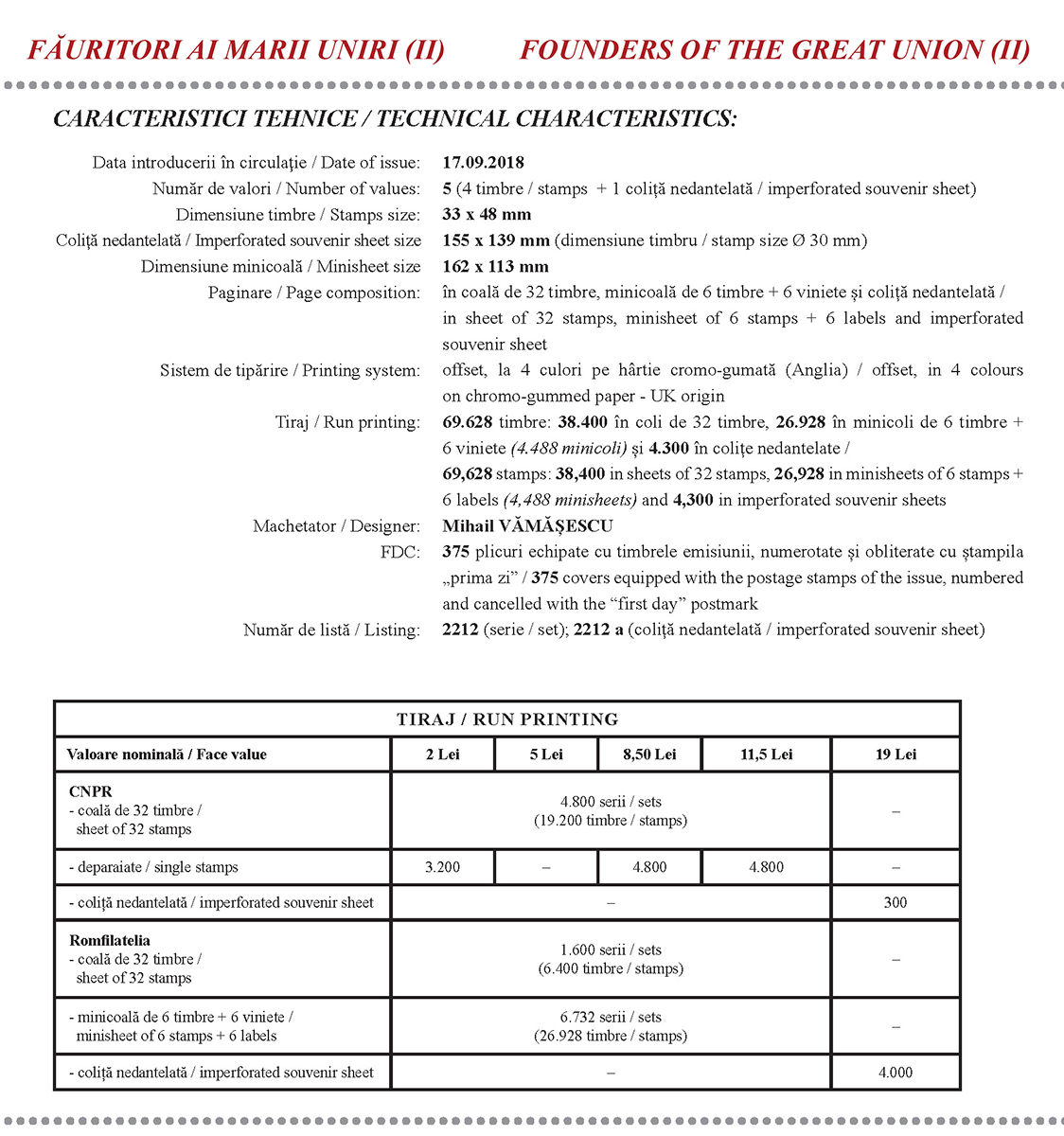