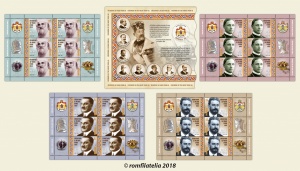 In the anniversary year of the 1918 Great Union Centenary, Romfilatelia introduces into circulation the postage stamp issue Founders of the Great Union, part I, which honors the personalities that contributed to the achievement of the Romanians’ most important ideal.

100 years ago, Romania suffered a serious and painful historical standstill. Once entered in World War I, in 1916, because of the unwavering desire for unification of all Romanians into the historical boundaries, the country faced an unequal battle, in terms of manpower and military endowment, with the German and Austro-Hungarian troops. After retreating in Moldova, a move that resulted in huge losses, the army subsequently obtained decisive victories, whose consequences, combined with favorable international situations, made possible, in 1918, the unification of Bessarabia (March 27th), Bukovina (November 28th) and Transylvania (December 1st) with the Romanians from the Kingdom of Romania.

In a brief biographical dissertation, we mention respectfully and with objective appreciation, the names of the personalities illustrated on the honorary postage stamps of the issue.

Miron Cristea (July 18th, 1868 – March 6th, 1939) was the first Patriarch of the Romanian Orthodox Church, an erudite cleric and militant for the rights of the Romanians in Austria-Hungary. He studied Theology in Sibiu, and afterwards he obtained his PhD in Letters in Budapest. As a Bishop of Caransebes (since 1910), he participated at the Great National Assembly in Alba Iulia. After the Union, he was elected honorary member of the Romanian Academy.

Iuliu Hossu (January 30th, 1885 – May 28th, 1970) was the bishop of the Greek-Catholic Church and Cardinal, a defender of the rights of the Romanians in Austria-Hungary. He obtained PhD degrees in Philosophy and Theology in Rome, and, in December 1917, he was appointed Bishop of Gherla. At the Great National  Assembly in Alba Iulia, he read the Declaration of Unification to the crowd.

Iuliu Maniu (January 8th, 1873 – February 5th, 1953) was the most important Transylvanian politician. He had joined the national struggle of Romanians in Austria-Hungary since his scholar years. His fighting spirit served the national cause, especially during his mandate as deputy in the Parliament of Budapest. On December 1st, 1918 he was one of the initiators of the Great National Assembly in Alba Iulia. After the war, Maniu organized the establishment of the Romanian administration in Transylvania, as president of the Governing Council, the transitional government of Transylvania.

Ion I.C. Bratianu (August 20th, 1864 – November 24th, 1927) was the most important politician involved in the Union of 1918. He was part of an illustrious family of Romanian politicians and was constantly preoccupied by the destiny of Romanians from abroad, especially during his term in office at the Foreign Ministry (1902-1904). During the years of the war he led the Romanian government, including during the Iasi refuge (1916-1918). Later he fought for the international recognition of Greater Romania at the Peace Conference in Paris.

Romfilatelia thanks His Beatitude Daniel, the Patriarch of the Romanian Ortodox Church, the Academician Razvan Theodorescu, the National Archives of Romania, the Museum of Bukovina from Suceava, professor Corneliu Andonie from the National Military Museum and Mr. Emanuel Cosmovici from the “Bunavestire Programs” Association, for the documentary and photographic support granted for the achievement of this postage stamp issue. 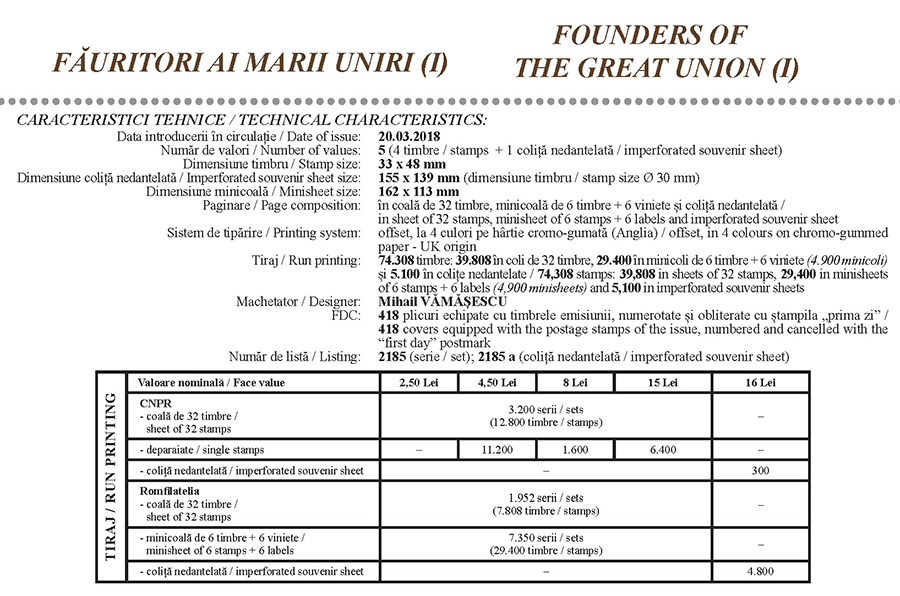