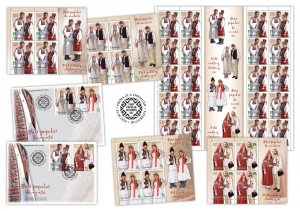 Romfilatelia continues the series of philatelic themes dedicated to folk costumes, through the “Folk Wedding Clothing (II)” postage stamps issue, which will enter into circulation on Thursday, September 24th, 2020.

Within this theme, wedding folk costumes distinctive for the folk areas of Maramures, Muscel, Arad and Valcea are presented, in pairs.

The costume distinctive for Maramures region, rendered in pairs on the postage stamp with the value of Lei 1.40, strikes through the vigour of the archaic elements and at the same time through the refinement of some stitches on the shirts. The clothing ensemble worn by the bride is composed of a wreath (mununa) that is placed over the tight hair, the shirt with straight, square cuts, unique in the Romanian tailoring template. Finely decorated at the neck, shoulders and cuffs and gathered at the shoulders, the shirt of the female from Maramures stands out through the most artistic stitches, the creases made in “boti”, “cupe”, “colti”, “ravase” or “paturi” being unique. Paired zadii (n.t. aprons), robustly woven and with a strong colouring, give the specific nature. The pieptar (n.t. sheepskin vest) with embroidery and leather panels is also an unmistakable zonal attribute. The bride wears a “zgarda scumpa de corale” (an expensive coral collar) around her neck. The straw clop (n.t. hat) is decorated with collars and tassels, next to the shirt “cu chept” and the wide tights with “roituri” (tassels) on the hem. The pieptar with leather panels and stylized polychrome embroidery is what completes the ensemble worn by the groom.

Referring to Muscel distinctive dress, illustrated on the stamp with the face value of Lei 3.30, it should be mentioned that it is characterized both by the richness of pieces adorned with alesaturi (n.t. fabric adorned with flowers and designs) and stitches specific to folk art, and by the sumptuous ornaments of gold and silver thread, specific to medieval art. The bride’s gown consists of marama (n.t. head dress) and fruntar (n.t. velvet tape, with which women tie their caps to fix their hair well), a shirt with poale (n.t. white skirts), a necklace of coins, a fota (n.t. rectangular wool fabric replacing skirts) and bete (n.t. narrow and long woven belt).

The fine ornaments on the marama are spread evenly over the whole field or concentrated at the ends are distributed in an association and a rhythm that denotes a decorative sense and a remarkable artistic taste. Geometric or floral motifs are obtained by navadire (n.t. passage between threads and reed, in the order required by the fabric template) or alesatura. The fruntar decorated with beads and floral decoration is placed over the marama. The shirt is richly decorated with metallic and wool thread. The white fota, specific to the bride, has a decoration made of silver metal thread on almost the entire surface and is associated with bete decorated in the same way. The shirt with straight cuts and discreet ornaments arranged at the combination of the sheets of cloth, itarii (n.t. trousers), the flared belt and the black vest made of dimie (n.t. thick wool fabric) make up the groom’s clothing distinctive for Muscel.

The wedding folk costume distinctive for Arad region is illustrated in pairs on the postage stamp with the face value of Lei 5.00.

The folk costume of the brides from Arad consists of gateala de cap (n.t. head dress), a shirt and poale (n.t. white skirt), sort (n.t. apron) and boots. On the head, the bride puts over the tight and braided hair a wreath of flowers and mirrors that are knotted at the nape of the neck. The shirt (spacel), the poale and the sort are predominantly white, influenced by the Slovak dress. The shirt is decorated on the collar, on the shoulders, on the sleeves and on the pumnari (cuffs). A necklace of silver coins is worn around the neck. The crinkled poale are fastened at the waist, over which the sort decorated with white or polychrome loom-woven alesaturi is placed. The lambskin or sheepskin vest is decorated with embroidery and leather panels. The groom wears a short and wide shirt, cut straight and crinkled at the sleeves, associated with wide tights, made of cloth sheets joined by decorative “cheite” (n.t. zigzag stitch, joining two pieces of cloth). Over these pieces, the groom wears the zabun, a vest made of materials predominantly made by industrial processes.

One of the most beautiful wedding folk costumes is the one distinctive for Valcea, Oltenia and is illustrated on the postage stamp with the value of Lei 19.00.

The bride’s gown consists of a shirt with a skirt with poale, having a rich decoration on the sleeves (in the system of altita (n.t. embroidery that is done on the shoulders of the traditional blouse), incret (n.t. crinkle) and rauri (n.t. decorative element in the Romanian folk costume, sewn in vertical rows on the ia, shirts, coats), chest and back. It is associated with the valnic, a pleated skirt that was worn only on holidays and ceremonies, being also the attribute of the wealthy people. From a chromatic point of view, thevalnic is predominantly red, and as a decorative technique it is chosen in the loom and fastened at the waist with bete. The traditional element, however, is the red brau that was worn on the bride’s head in the form of a hood, called a sovon, which was worn deep on the forehead. On top, a bunch (chita) of basil was put. The day after the wedding, in a ceremony of old tradition, the bride was wrapped by the godmother with carpa or marama, thus entering the ranks of married women.

The groom’s costume, simpler, but not lacking elegance, consists of a white shirt sewn ton sur ton, itari (thick trousers made of dimie), brau (n.t. woven belt) and bete finished on the long sides with white beads. The lambskin pieptar (n.t. vest) with floral embroidery was worn over the shirt.

All ensembles date back to the beginning of the twentieth century.

Romfilatelia thanks to “Dimitrie Gusti” National Village Museum for the documentary and photographic support provided to the development of this postage stamps issue.

The postage stamps issue “Folk Wedding Clothing (II)”  will be available on Thursday, September 24th  2020, in Romfilatelia’s shops network in Bucharest, Bacau, Brasov, Cluj-Napoca, Iasi and Timisoara and online on https://romfilatelia.ro/store/. The postage stamps issue is completed by 2 “first day” covers, in sheet of 20 stamps and minisheet of 4 stamps with illustrated border. 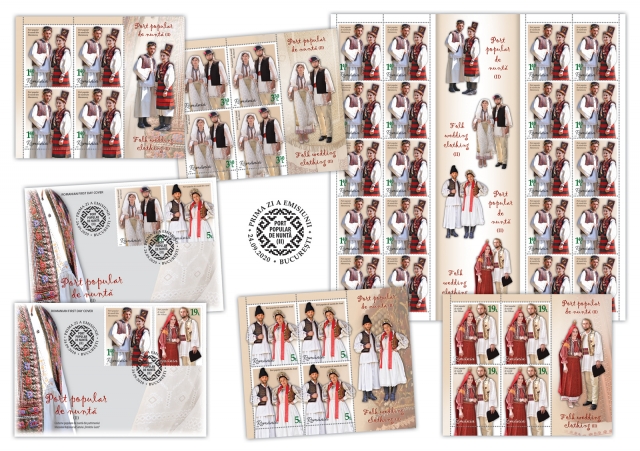 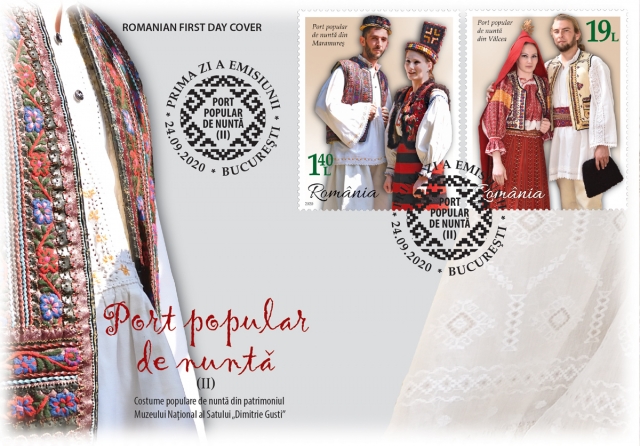 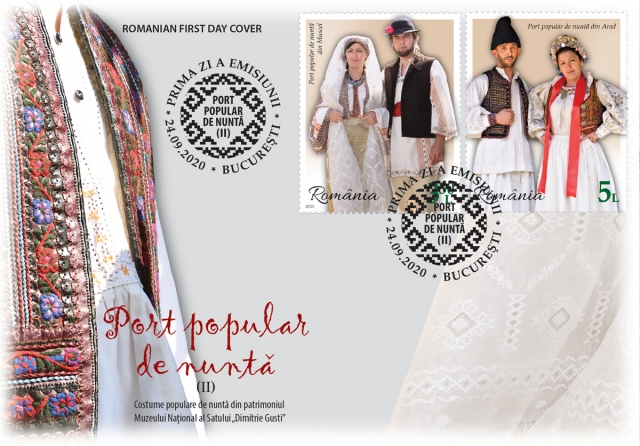 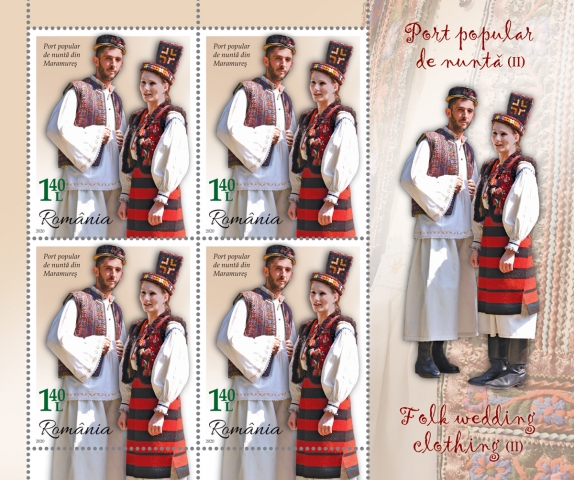 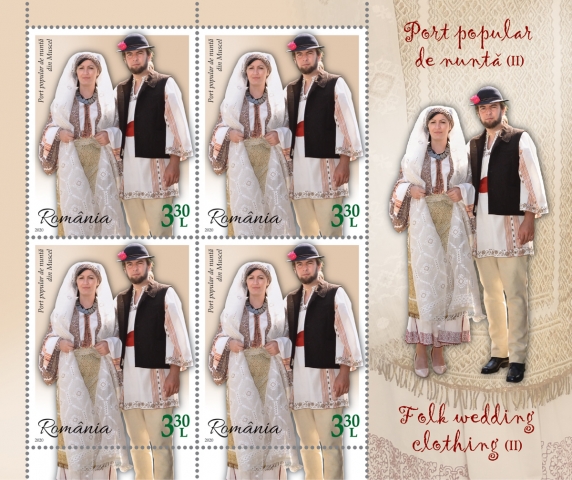 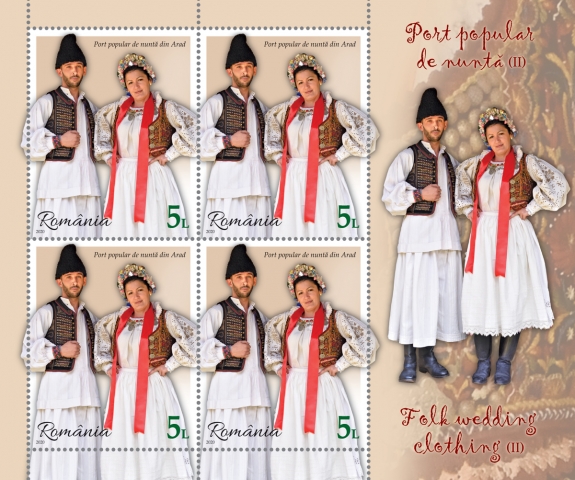 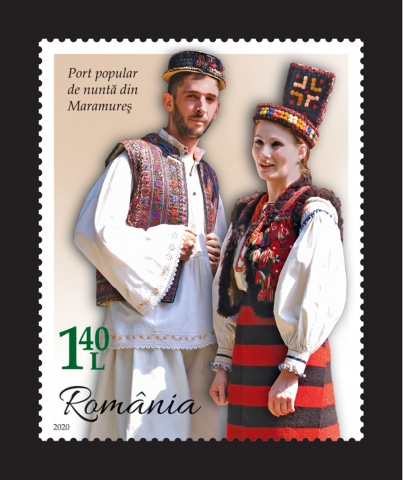 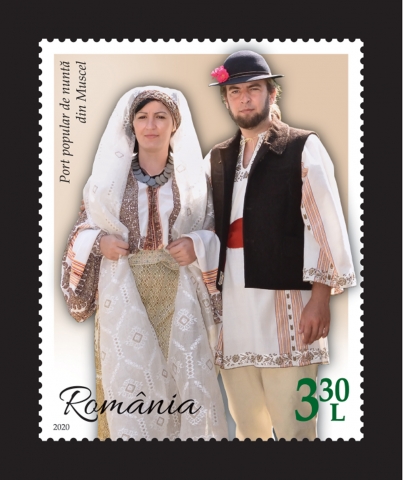 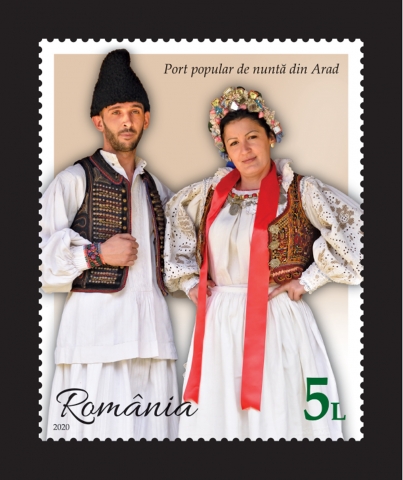 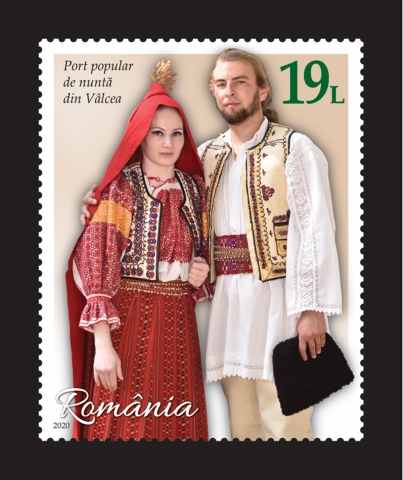