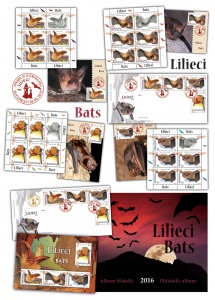 Romfilatelia introduces into circulation a new postage stamp issue, dedicated to nocturnal, intricate and full of mystery creatures – Bats – inviting all those who appreciate these mammals to discover them on four thematic collection stamps.

The only mammals naturally capable of true and sustained flight, the bats are associated in the Western culture to several myths, some partly true, others only rooted in superstition. From flying rats that get caught in human hair, messengers of evil and dirty creatures by their nature, the myths about bats are numerous, however the real and known features of these mammals come to contradict the popular believes.

Thus, the bats are mammals with ultra-sophisticated sensors that help them detect even the slightest move of the air, are capable of altruism, supporting colony members who cannot hunt, and are considered ecological indicators due to their sensitivity to pollution and diversified nutrition.

Illustrated on the stamp with the face value of lei 2.50, Plecotus auritus (the brown long-eared bat or common long-eared bat) is a medium size species, with large ears compared to the size of its body. The fur on its back is light brown, brown or reddish-brown; on its sides it is lighter and generally yellow-brown. The presence of this species is associated with mature forests, mainly deciduous ones, being also present in mixed forests or in coniferous forests, in mountainous areas. In summer it takes shelter mainly in tree hollows or buildings.

Pipistrellus pipistrellus (the common pipistrelle) is illustrated on the stamp with the face value of lei 4.50. It is a really small species with its fur being dark brown on its back, often rust coloured or sometimes a light, pale brown. The face and ears differ clearly from the fur’s aspect by their dark colour. It is a very widespread species and frequently encountered, adapting well to the anthropic environment. In summer, colonies can be found in the hollows of trees, under tree bark, in buildings, attics and cracks in the wall.

On the stamp with the face value of lei 8 is illustrated Miniopterus schreibersii (the common bent-wing bat), a medium size species, with a very short snout and bulging forehead, short and triangular ears, which do not overextend beyond the top of the head, and very long and narrow wings. Usually, the colonies take refuge in caves throughout the year, but rarely in mines and other subterranean shelters. It prefers caves with large entrances from karst regions in hill or mountainous areas. Solitary specimens or in small groups may be found in a variety of shelters, in buildings, in the structure of attics.

On the stamp with the face value of lei 15 is represented the Nyctalus noctula (the common noctule), a large size species, with silky, red-brown fur. It takes shelter in tree hollows, preferring the ones created by woodpeckers, which are situated between 4-12 m. It is well adapted to the urban environment, appearing even in larger cities, where their favourite shelters are the cracks in the building walls.

The issue is completed by a first day cover and a set of maxicards, and as page composition were used the sheet of 32 stamps, minisheet of 5 stamps + 1 label and the block of 4 stamps (in philatelic album).

The philatelic album is created into a limited edition of 245 pieces and is equipped with the block of 4 stamps of the issue and the first day cover having the “first day” postmark clearly imprinted in foiling. Both products are numbered from 001 to 245.

Romfilatelia thanks the Romanian Bat Protection Association for the documentary support granted in the creation of this postage stamp issue.