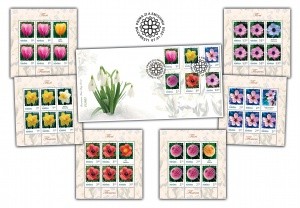 The postage stamp with the face value of Lei 1.80 presents the Tulip, which is part of the Liliaceae family. The plant is native to Central Asia and Turkey. It was introduced in Europe in the mid-16th century, when tulip bulbs from Turkey were brought to the Netherlands, quickly becoming one of the most popular flowers. October-November is the ideal time for planting bulbs. Tulips prefer clayey, fertile, well-drained, sunny or slightly shaded soils. After completion of flowering and complete wilting of the leaves, the bulbs are removed and stored until autumn in ventilated places.

The postage stamp with the face value of Lei 1.90 graphically reproduces the Daffodil, or Narcissus, part of the Amaryllidaceae family. It originates from the Mediterranean region, but some species are found in Central Asia and China. The genus name comes from the Greek word “narke” which means deep sleep or numbness, referring to the toxic alkaloid found in the bulb. Currently there are thousands of horticultural varieties, the flower being, usually yellow or white and occasionally orange, green or salmon. For prolonged flowering, it is ideal to be planted under trees, where the light is filtered. The bulbs are planted in the fall, in September-October.

On the postage stamp with the face value of Lei 2.20 the Peach flower is illustrated. Prunus persica is a fruit tree of the Rosaceae family, the genus Prunus. Originally from China, it was brought to Europe by the Persians. It is highly cultivated for its fruit in temperate and subtropical areas. Peach is a tree that reaches up to 10 m in height. It tolerates temperatures up to about -20 °C, but requires hot summers to ripen its fruit and a clear distinction between seasons. For abundant fruiting it is planted in sunny areas with well-drained soil.

The Dahlia, illustrated on the postage stamp with the face value of Lei 2.70, is part of the Asteraceae family. It is a plant native to Central and North America. It was brought to Europe in the 16th century by Spain, from where it spread rapidly to other countries. Dahlias are highly appreciated for flowers of various shapes and colours that bloom from late summer to late autumn. They are sensitive to frost, which is why the tuberized roots are removed in the fall and kept in the sand, in cool and dry places. It is planted in rich, clay soils, in sunny areas.

The Poppy flower, reproduced on the postage stamp with the face value of Lei 3.30 is part of the Papaveraceae family. The genus Papaver comprises approximately 80 species of annual, biennial or perennial plants native to Europe, Asia and North America. Most are spontaneous species, found in nature, with only a few species (Eastern Papaver, Papaver somniferum) having cultivars in which the shape and colour of flowers differ. The poppy prefers loose, more or less calcareous, fertile soils with sunny exposure. Also, it includes herbaceous plants that can have heights between 20-150 cm. The poppy is a spring flower, found in the category of field flowers (spontaneous flowers).

The Anemone, depicted on the postage stamp with the face value of Lei 53.50, is part of the Ranunculaceae family. This type of plant comprises about 120 species, most native to the cold regions of the northern hemisphere. The name comes from the Greek word “anemos” which means wind. Many symbolic references to anemones also speak of death due to their interesting history. They were often related to the myth of Adonis and Aphrodite. Anemones are perennial plants that bloom in spring. They are cultivated for flowering ginger flowers coloured in white, pink, purple or blue. Planting is done in autumn in sunny or partially shady places. For a colour effect it is planted in groups. Easter flower or Anemone nemorosa is one of the species of anemone that grows spontaneously in our country.

On the First Day Cover of the issue, the Snowdrop was illustrated. Galanthus nivalis, belongs to the family Amaryllidaceae. The genus Galanthus comprises approx. 20 plant species from Europe to northern Iran. In our country, 3 species of snowdrop are found in nature, of which 2 are declared rare species internationally and Galanthus nivalis declared rare at European level.

It is an indigenous species (it grows spontaneously in meadows and pastures). The common snapper is the most cultivated species of guinea pigs and the first flowering plant at the beginning of spring.

Romfilatelia thanks the representatives of the “Dimitrie Brandza” Botanical Gardens of the University of Bucharest for the documentary support granted in the achievement of this postage stamps issue.

The postage stamps issue “Flowers” will be available on Tuesday, January 7th 2020, in Romfilatelia’s shops network in Bucharest, Bacau, Brasov, Cluj-Napoca, Iasi and Timisoara and online on https://romfilatelia.ro/store/. 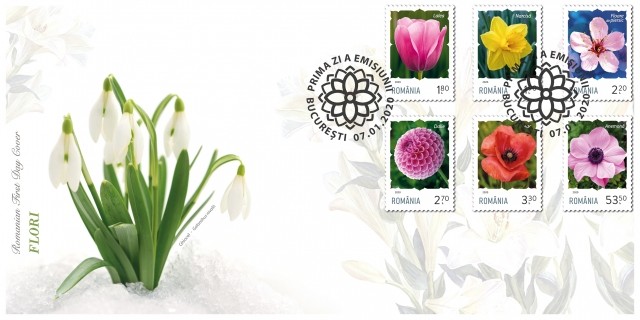 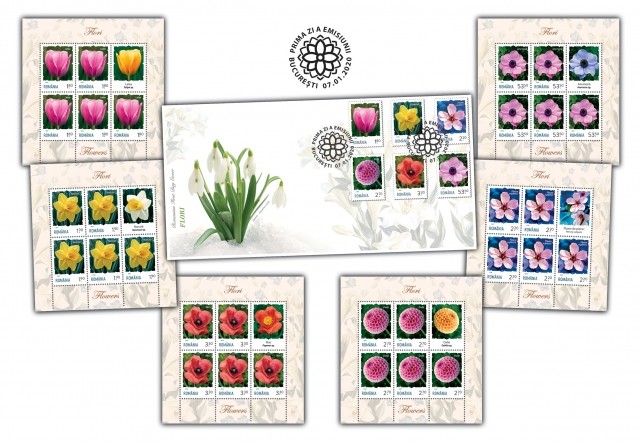 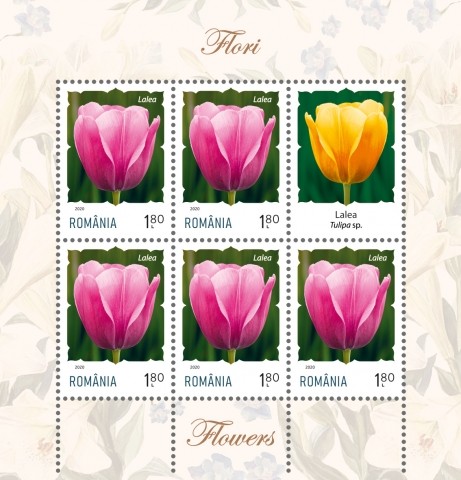 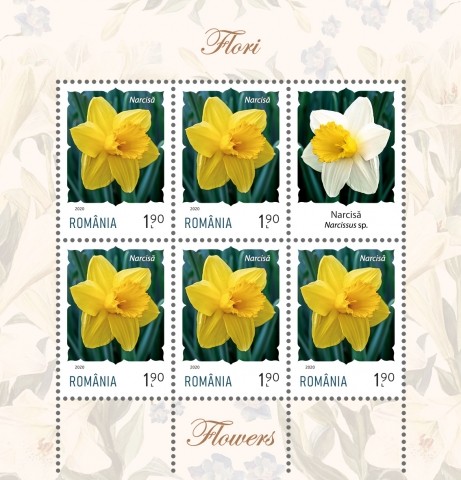 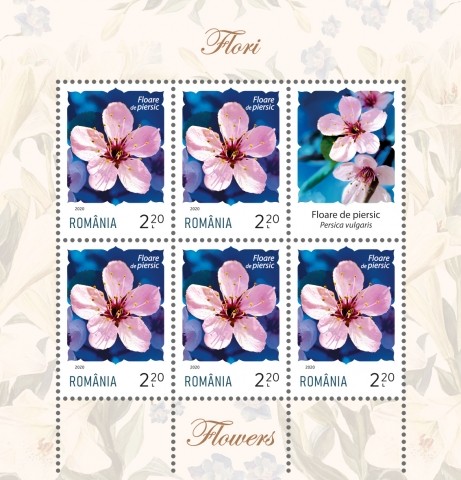 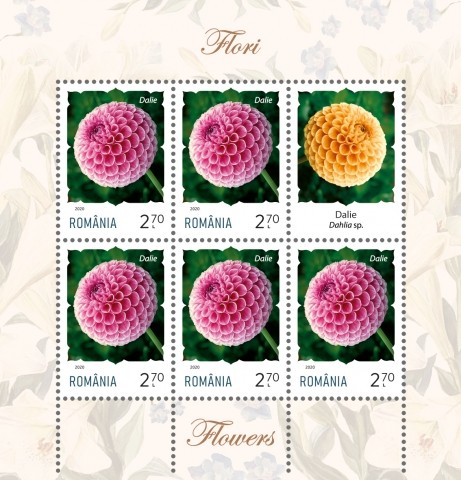 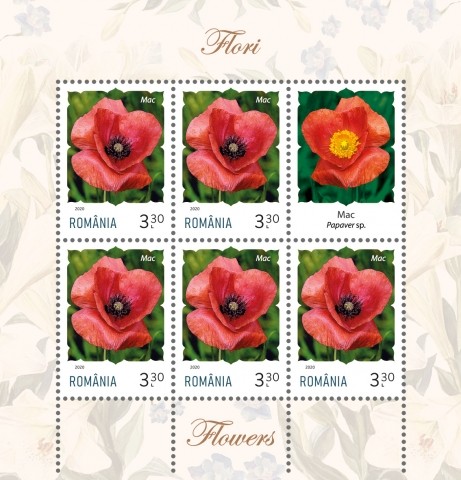 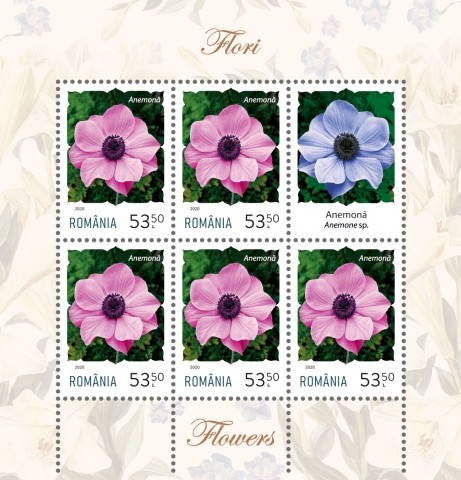 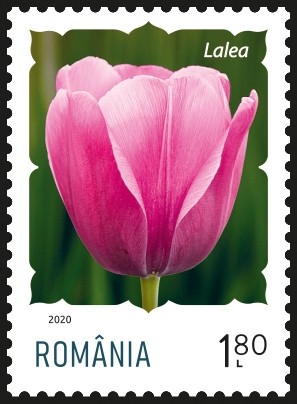 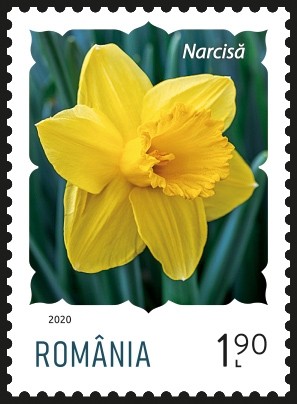 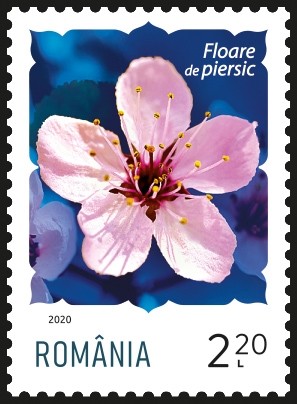 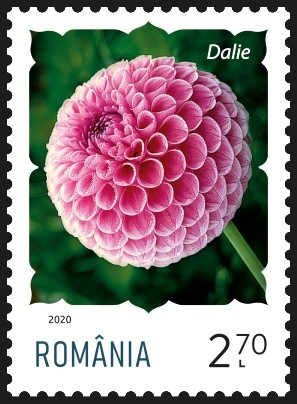 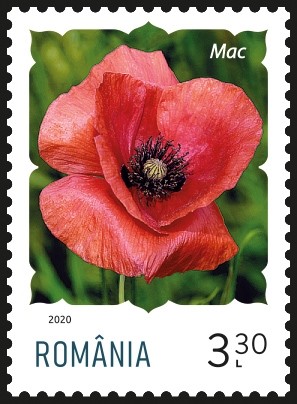 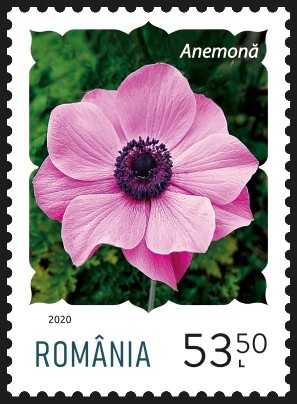