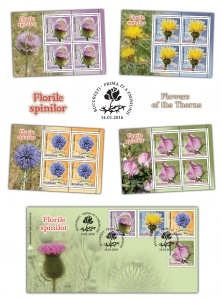 Beauty governs the surrounding world. We find it in our daily lives, unveiling to us in its classical form, when its presence in more than obvious, but also in a hidden form, when it shows up where you don’t expect. The latest Romfilatelia project consolidates this idea under the suggestive title of Flowers of the Thorns and brings to the attention of the public flower species found in Romania, characterized by the beauty of the flowers, but also by the armour of the thorns they have, both being combined harmoniously and thus creating what the eye perceives as beauty.

Available for purchase starting from Thursday, January 14th, 2016, in Romfilatelia’s shops in Bucharest, Bacau, Brasov, Cluj-Napoca, Iasi and Timisoara, the philatelic issue consists of four postage stamps and a first day cover, while as page composition were used the sheet of 28 stamps + the minisheet of 4 stamps with illustrated border.

The plants reproduced on the issue’s stamps are spread across many areas and continents of the world, our country being among the places where these species can be seen.

– The Dipsacus fullonum plant is represented on the stamp with the face value of lei 4.70. Known by the common name of wild teasel, it is native to Eurasia and North Africa, but it is also known in the Americas, Southern Africa, Australia and New Zealand as an introduced species and often a noxious weed. It is a vigurous plant, with a tall stem of 50-200 cm, with edges and spiny, and the common receptacle contains numerous tubular flowers of lavender color.

– On the stamp with the face value of lei 5.00 is reproduced the image of Centaurea solstitialis, an annual plant of the Asteraceae family, native to the Mediterranean Basin. As the name suggests, it blooms in late summer, from after the midsummer solstice to early autumn. The flowers are bright yellow, oblong globular and show spiny long and branched appendages, on the base.

– Echinops ruthenicus plant is illustrated on the stamp with the face value of lei 6.00. Native in the Eastern Balkans, Caucasus, Crimea, South-West Asia and Siberia, the species is part of the sunflower family, the Asteraceae family. It is characterized by deeply serrated and thorny leathery leaves, a height of 70 cm and globular flowers, whose lively blue colour make them easily noticeable in the summer, on the sunny hills of our country.

– The stamp with the face value of lei 8.10 reproduces the image of the plant that is commonly known as spiny rest-harrow. Having the scientific name of Ononis spinosa, it belongs to the Fabaceae family and is a small bush, 30-60 cm tall, with very spiny twigs on the stem. The leaves are trifoliate at the bottom of the stem and the flowers are pink. The plant is common in Europe, the Caucasus and Asia Minor.

In creating this postage stamp issue, Romfilatelia thanks the Romanian Academy Institute of Biology and Ms. Lect. Paulina Anastasiu for the documentary support offered to the project.