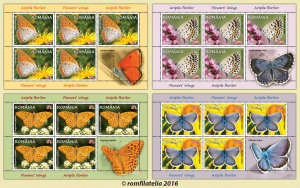 How many of us often admired the unusual game of butterflies in a field of flowers? Beautifully colored, with wings “flickering”, seeking scent, butterflies have always been one of the species that have caught the imagination of people, inspiring them in their artistic endeavors.

Romfilatelia dedicates the stamp issue Flowers’ Wings to these symbols of delicate and ephemeral beauty.

A legend tells us that after the flowers created, God was asked by some of them to give them wings so they can touch the sky. God heard their prayer and there appeared on earth butterflies. Another legend says that the butterflies are actually angels with wings of flower petals.

Spread on all continents except for Antarctica, butterflies fly from the Arctic tundra, where summer sometimes lasts a few days, to equatorial forests and deserts, from sea level up to the eternal ice in the high mountains. They need only sunlight, food plants for caterpillars and usually a little nectar as an energy source for the adults, although among moths there are quite a few cases where the adults have no obligations other than reproduction, renouncing their feed.

Butterflies belong to the insects with a complete metamorphosis where, between the larval and adult stages, the pupa (chrysalis) state is interposed.

Butterflies and their relatives (other insects, such as beetles, flies, mosquitoes, wasps, ants, bees, grasshoppers, dragonflies and many others) belong to a large group of animals called arthropods.

Lepidoptera is a scholarly term derived from ancient Greek and means “scaly wings” – alluding to microscopic scales covering the butterfly wings like roof tiles. These scales are actually flattened hairs, and their spectacular colors are of two categories – chemical or physical. White occurs due to the reflection of all the wavelengths in the visible spectrum and is due to scales being filled with air.

On the postage stamps of the issue there are illustrated the following four butterfly species:

Vanished from Great Britain ever since 1864, the species name (dispar– disappear) refers to the “disparity” of the two sexes’ appearance: the male is metallic copper, while the female is opaque yellow-red on the anterior wing and dark brown on the posterior wing. On the inferior side, the two sexes are similar, the bluish background of the hindwings and the arrangement of the eyespots allowing the separation of the species from the closely related ones. The butterfly is protected in the EU, therefore in Romania, as well.

Originally, Orion was a character from Greek mythology – a giant hunter who after a series of adventures is converted into a constellation with the same name. The justification for using a giant’s name for a tiny butterfly the size of a thumbnail is that the authors who founded the entomology in the 18th century used a mnemonic system for naming the species, inspired by Greek and Latin mythology.

Thus, the large and sumptuously colored butterflies were assigned the name of first rank mythological characters – such as Apollo, Odysseus and Achilles, while tiny species were associated with characters from the lower society: shepherds, hunters, sailors, peasants.

The Silver-Studded Blue (Plebejus argus) is one of the most common species of a group called “the blues”: the male is metallic-dark-blue, and the female is blackish. In Romania dozens of species of “the blues” are known. The caterpillars feed on plants from the leguminous family and, like the majority of species in this group they are protected by ants which are attracted by the secretion of some special glands. The scientific name is an allusion to the numerous eyespots on the inferior side of the wings: Argus is a titan in the Greek mythology, remarkable by the multitude of eyes (one hundred!), described as having the body covered in eyes.

Silver Washed Fritillary (Argynnis paphia) is a typical representative of the “fritillaries” – reddish-yellow with rows of black dots above and underneath with silvery-ivory patches or characteristic lines, different from one species to another. The scientific names of the various species of fritillaries are mostly inspired by the many nicknames of the goddess Aphrodite (Venus, for Romans). In this case, the name refers to the “silver” Aphrodite (argyros, silver in ancient Greek) from her temple on the island of Paphos. The host plants for the caterpillars of fritillaries are violets but the female stands out for the fact that it does not directly lay the eggs on the plant that the caterpillar preferres, as is generally the case, but on the trunks of the trees close by.

Romfilatelia thanks the specialists and the researchers within the Dinosaur Geopark – Tara Hategului and also the photographer Dan Valentin Palcu for the documentary support offered in the creation of this postage stamp issue. 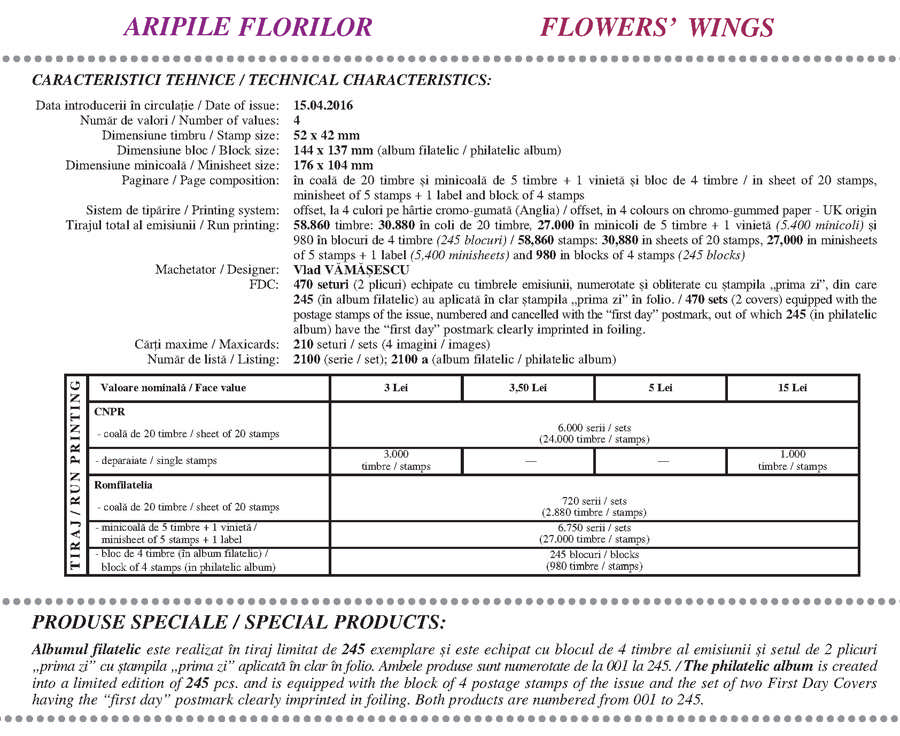