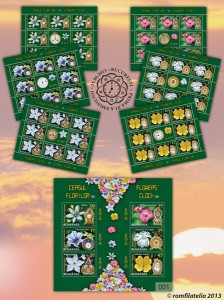 Romfilatelia introduces into circulation the second part of this philatelic issue, consisting of 6 stamps illustrating different species of flowers along with collectible clocks, manufactured in the late 18th century and in the 19th century in France, Germany, Austria and Switzerland.

Each flower, depending on its belonging species and spreading geographical area, has a specific hour when it reveals itself to the light, nature and people. This beautiful feature of flowers is illustrated in the 12 stamps of the Flowers’ clock philatelic issue, consisting of two parts. To each flower is assigned a watch, exhibit in the „Nicolae Simache” Clock Museum inPloiesti, which indicates the blooming hour.

Now, Romfilatelia introduces into circulation the second part of this philatelic issue, consisting of 6 stamps illustrating different species of flowers along with collectible clocks, manufactured in the late 18th century and in the 19th century inFrance,Germany,Austria andSwitzerland.

The Anthericum ramosum is a perennial plant being 30-80 cm in height, originating fromCentral Europe. Its inflorescence is a panicle, and its flowers have white tepals of 10-14 mm. Its fruit is an almost spherical capsule measuring 5-6 mm. This plant grows in meadows, at the level of beech forests.

Next to the Anthericum ramosum, the image of a table clock is represented, Japy Frères, Beaucourt, 1823-1849.

On the stamp with the face value of lei 1.20 is illustrated the Marvel of Peru (Mirabilis jalapa L.), which blooming hour is 5 p.m.

The Marvel of Peru is a perennial plant cultivated for ornamental purposes or subspontaneous. Originating from tropicalSouth America, it can reach up to 1 m in height. Its flowers have various colours, yellow, red, white, purple, or combinations of such colours. Sometimes, it can produce flowers of different colours on the same plant.

Next to Marvel of Peru, the image of a table clock is illustrated,Kienzle,Germany, 19th century. The clock belonged to the historian Nicolae Iorga.

On the stamp with the face value of lei 1.40 is illustrated the Jimson weed (Datura stramonium L.), which blooming hour is 6 p.m.

The Jimson weed or Datura is an annual plant that can be found in uncultivated lands near houses, as well as on the fields. An adventive species, it is native ofNorth America. Its stalk grows up to 1.5 m, is richly ramified in its upper part, and the leaves are large and dark green in colour. Its fruit is a large ovoid capsule that contains small brown seeds.

Next to the Jimson weed the image of a pocket watch is illustrated, Jacquemarts type, with repetition, Robert et Courvoisier,Geneva, 1790-1800.

On the stamp with the face value of lei 3.00 is illustrated the White campion (Silene latifolia Poir.), which blooming hour is 7 p.m.

The White campion is an annual plant native ofEurasia. Dioecious plant, growing up to 40-80 cm in height, it blooms from the end of spring until early autumn. Its flowers are white, measure 2.5-3 cm, and its fruit is a dehiscent capsule. It grows at the level of beech forests, in meadows, underwood, or on the edge of the roads.

Next to White campion, the image of a traveller’s clock with alarm and repetition is illustrated,Austria, early 19th century.

On the stamp with the face value of lei 3.10 is illustrated the Winged Tobacco (Nicotiana alata Link & Otto), which blooming hour is 8 p.m.

It is a perennial plant, although it can be annual when cultivated, with large wide leaves, and white flowers. It originates fromSouth America. It has a stem growing up to 80-100 cm. Its numerous flowers have a very pleasant scent and bloom during the night, from June until September.

Next to the Winged Tobacco, the image of a chimney clock is included, anonymous factory,Paris, 19th century.

On the stamp with the face value of lei 4.70 is illustrated the Common evening primrose (Oenothera biennis L.), which blooming hour is 9 p.m.

It is a biannual adventive plant, native ofNorth America. It grows on sandy soils, riverbanks, and even in stone quarries. Its name comes from the fact that its big yellow flowers bloom only in the evening.

Next to the Common evening primrose is represented the image of a miniature table clock,France, 19th century.

We would like to thank the Biology Institute of the Romanian Academy and to the “Nicolae Simache” Clock Museum (Ploiesti) for the documentary support granted in the accomplishment of this postage stamps issue. 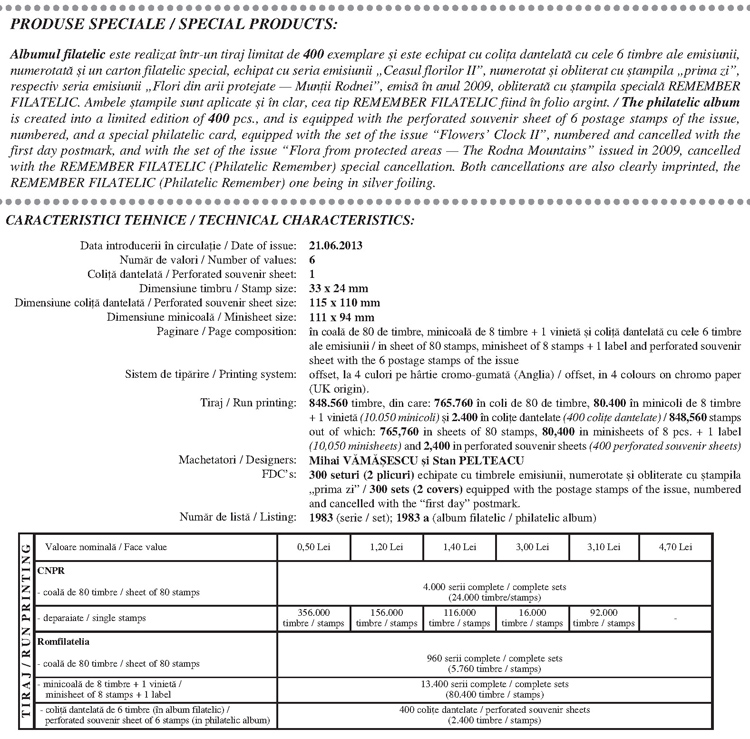