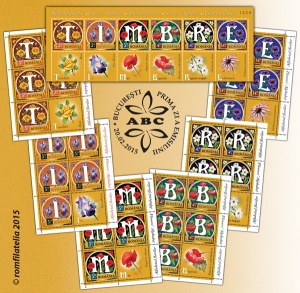 The postage stamp issue named Flowers alphabet represents an original approach which brings together the traditional philatelic topic of flora and the graphic concept of a head letter or initial, an uppercase letter, usually ornate, used at the beginning of chapters in bibliophile editions. Head letters can be classified into two categories: those which are combined with a floral or animalistic element, strictly ornamental, without reference to the subject-matter of the paragraph they are a part of, and initials whose images illustrate a character or a scene from the paragraph they precede.
Each stamp of this issue depicts one such head letter intertwined with a flower. The flowers name starts with the letter portrayed on the initial, the entire issue forming the word TIMBRE (the Romanian word for stamps).
The stamp with the face value of 3.00 Lei illustrates the letter T of Trandafir (the Romanian word for rose – lat. Rosa).
The rose is native of the continental and subtropical regions of the northern hemisphere. It takes the form of erect shrubs, climbing or crawling, often spiny. Approximately 190 species and thousands of cultivated varieties are known in the wild flora. The flowers are of different sizes and shapes, with a rich color palette. The majority of ornamental roses are hybrids that were bred for their flowers. Ornamental roses have been cultivated for millennia, for the first time in the gardens of Greece and China about 2,500 years ago. The long cultural history of the rose has led to its use as a universal symbol of love and beauty.
The stamp with the face value of 3.10 Lei illustrates the letter I of Iris (lat. Iris sibirica), a perennial plant, in the form of small shrubs, 60-80 cm in height.
With flowers of different colours and shades, the Greeks named these flowers after the word rainbow. The Sibirica species, as the name suggests, was first collected in Siberia by monks in the area. Spontaneously, it grows in the temperate zone of Europe and Asia, but it is also cultivated because of its beautiful purple flowers. The leaves turn yellow and die back in autumn, to re-emerge in the spring. The iris has a thin and hollow stem that supports 2-3 flowers of 6-7 cm in diameter which come in a wide range of blue shades.
The stamp with the face value of 3.30 Lei illustrates the letter M for Mac (the Romanian word for the poppy plant – lat. Papaver rhoreas), an annual herbaceous plant whose straight stems, strongly ramified, span between 20 to 90 cm in height. It is part of the Papaveraceae family with solitary flowers, consisting of four petals of various colours. As the name suggests, rhoeas meaning red in Greek, the most common flowers are red, but also pink, purple or white. In the past it was used in medicine as a mild sedative, today it is widely cultivated, the poppy seeds being used in food and pharmaceutical industry or as a decorative plant.
The stamp with the face value of 4.30 Lei illustrates the letter B of Begonia (lat. Begonia x tuberhybrida).
Begonias are native to tropical and subtropical areas with humid climates. They are herbaceous and perennial plants, the Begonia x tuberhybrida species having a tuberous root system. The stem is juicy, fragile, densely covered with fine hairs. Begonias flowers are large, have diverse colours and are classified by their shape.
The stamp with the face value of 4.70 Lei illustrates the letter R of  Regina noptii (the Romanian word for Flowering tobacco – lat. Nicotiana alata), a herbaceous, perennial plant, but due to its low resistance it is cultivated annually. It belongs to the Solanaceae family and was originally cultivated in South America. It reaches heights of 70 to 140 cm. The leaves are ovate, 10-25 cm long, covered with short hairs.
The star-shaped flowers are odorous, finely hairy, white inside and slightly purplish outside, and consist of 5 petals united by a narrow tube to the base. These open in the evening and close in the morning. It blooms in late summer, from July to October.
The stamp with the face value of 14.50 Lei illustrates the letter E of Echinacea (lat. Echinacea purpurea), known as the  evening sun. Echinacea belongs to the Asteraceae family and is native to North America. It is a perennial plant, with a height of 50 to 100 cm. The flowers are large, purple, up to 15 cm in diameter. It blooms in the second half of the summer. It is a sun loving plant and will not flourish if planted in shady places.

Romfilatelia thanks The Romanian Academy Institute of Biology for the documentary support granted in the achievement of this postage stamp issue. 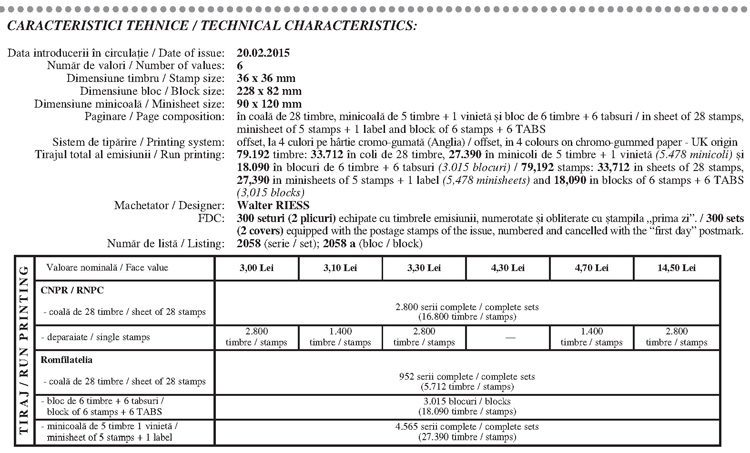