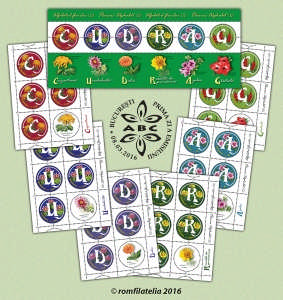 In different regions of the globe the March 8th festivities range from a general celebration of respect, appreciation and love towards women to a celebration for their economic, political and social achievements. International Women’s Day has had various interpretations over the years. The version that is celebrated now has its origin in 1977 when the United Nations General Assembly invited all member states to proclaim March 8th as Women’s Rights and World Peace Day.

On this occasion, Romfilatelia offers to all the ladies a symbolic bouquet of flowers. Each of the stamps of this issue depicts a head letter intertwined with a flower, the entire issue forming the words “CU DRAG” (With Love).

Chrysanthemums, also called autumn daisies, belong to the genus Chrysanthemum, featuring over 30 species of perennials belonging to the family Asteraceae, native to Asia and northeastern Europe. The flowers are solitary or grouped in multiple inflorescences. The flowers of the spontaneous species are yellow; even the name chrysanthemum is derived from the Latin words chrysos (gold) and anthemon (flower). The cultivated species have a multitude of shapes and colours ranging from white, yellow to various shades of red, green or purple.

The stamp with the face value of Lei 1.40 illustrates the letter U of “Urechelnita”, the common houseleek (lat. Sempervivum tectorum).

Its name does not betray the beauty and utility of the plant. In Europe, it grows in among the spontaneous flora but is also widely cultivated for its ornamental and curative nature. In Romania it’s found in rocky limestone areas, but it’s also cultivated and even preferred for growing on green roofs in some rural areas. Fleshy leaves grow from the stem, thick and very juicy, arranged in a rosette, with sharp peaks. They are used in various household remedies both internally and externally.

The stamp with the face value of Lei 1.60 illustrates the letter D of Dahlia (lat. Dahlia variabilis).

The Dahlia genus includes over 15 species of perennials and is native to Central and North America. Its cultivation in Europe began in the Royal Gardens of Madrid, the director of the gardens naming the plant in honor of the Swedish botanist Anders Dahl, who brought the plant from America. The flowers are grouped in inflorescences of various colors. The plant is multiplied by tubers.

The species grows in Europe and Asia; in our country it can be found on steep hills, in pastures and sunny hayfields, from the plains to the mountains. The leaves are deeply divided, like those of dill. The flowers are golden yellow and shiny. It is considered a poisonous plant, but with curative properties for heart disease.

The stamp with the face value of Lei 8 illustrates the letter A of Azalea (lat. Rhododendron japonicum).

Azaleas are a group of shrubs that belong to the genus Rhododendron. Its name derives from the Greek words rhódon (rose) and déndron (tree). The plant is attractive both by size and composition of the flower, which can be simple or with multiple petals, and also by its vivid color tones and shades from dark red or purple to pink and white. The azalea is widespread in regions with mild winters and moderate summers except Africa and South America.

The stamp with the face value of Lei 16 illustrates the letter G of Gladiola (lat. Gladiolus hybridus).

The Gladiolus genus contains over 250 species spread throughout Asia, Europe and South Africa. Gladiolas are related to irises, both having an elongated shaft sharpen toward the peak, in the form of a sword. Even its name is derived from the Latin word for sword, gladius. Its flowers grow in the form of a blade, with a wide range of colors.

Romfilatelia thanks The Romanian Academy Institute of Biology for the documentary support offered in the creation of this postage stamp issue.