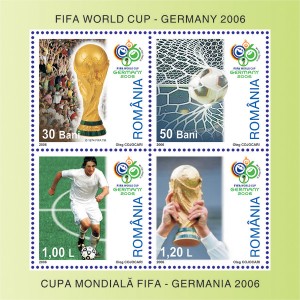 Romfilatelia introduces into circulation a postage stamps issue dedicated to the Football World Championship (FIFA World Cup – Germany 2006) which will take place this year, between the 9th of June and the 9th of July.
Between 1930-1970, the stake of the final tournaments of the Football World Championships was the “Jules Rimet Cup”, called by the name of the president of FIFA, Jules Rimet, who had the idea to create a competition of the best football
national teams of the world.
Also known as the “Golden Goddess”, the “Jules Rimet Cup” was created by the French sculptor Abel la Fleur. In 1970, Brazil definitively gained possession of the
trophy made of massive gold, fitted on a rare stones base, after its third final success. In 1983 after the stealing of the “Golden Goddess”, the Brazilian Football Federation replaced it with a duplicate.
Starting with 1974, the awarded trophy has been the “FIFA World Cup”, created by the Italian sculptor Silvio Gazzaniga. The current trophy was selected out of fifty
models. The international football champions are awarded a true work of art, made of gold.
Under this new look, the “World Cup” trophy was conquered, for the first time, by the West-German representative team, which defeated Holland in the final game of the World Championship of 1974 with the score of 2-1. So that the trophy may remain safe, the winning teams receive only a gold-plated copy of the cup, while the original remains in the custody of the International Football Federation, at the headquarters of F.I.F.A. in Zürich.
The meetings between the teams qualified for the Football World Championship of Germany will take place in 12 cities, and the final game will take place in Berlin, on the 9th of July. Thirty two national football teams from all the continents will participate.
The philatelic issue contains four postage stamps:
-the postage stamp having the face value of RON 0.30 shows an image suggesting the atmosphere in the tribunes during football games;
-the postage stamp having the face value of RON 0.50 shows a scoring goal;
-the postage stamp having the face value of RON 1.00 illustrates a football player during the game;
-the postage stamp having the face value of RON 1.20 suggests the cup raised in a triumphant gesture. 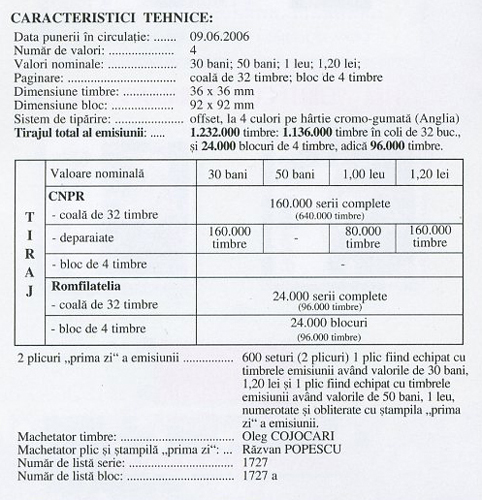