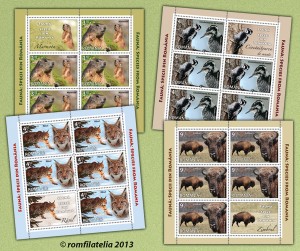 Romaniais one of the few European countries having a very well preserved biological diversity. As an integral part of biodiversity, the terrestrial fauna of our country, which is one of the richest and most various fromEurope, consists of three large fauna complexes: the alpine complex, the forest complex and the steppe complex. They contain old local elements and relatively young ones, rare or even unique species on the continent.

Wishing to complete the philatelic collections dedicated to this theme, Romfilatelia introduces into circulation the postage stamps issue entitled Fauna: Species from Romania.

The alpine marmot (Marmota marmota), illustrated on the stamp with the face value of lei 3.30, is the world’s largest species of rodents from Sciuridae family. It lives in the mountain areas from Central and Southern Europe, at altitudes between 800 and 3200 m, being mainly found in the Alps, the Carpathians, the Tatras and thePyrenees.

Extinct in our country almost one hundred years ago, the marmot was reintroduced quite recently in the area of Fagaras, Parang, Retezat and Rodnei mountains. It may weigh between 4 and 8 kilos and its length varies between 42 and 54 cm. Its legs are short, the forelegs have four toes, where as the hide ones have five toes and strong 2 cm claws. Its eyes are placed sideways and cover a 300 degree visual field. Though having very small ears of only 2 cm, the marmot can hear very well.

The three-toed woodpecker (Picoides tridactylus), illustrated on the stamp with the face value of lei 4.30, is a species present in the coniferous forests from Central andEastern Europe.

The three-toed woodpecker has its head marked sideways by three black stripes separated by two white stripes. The body sides have transversal spots and in the middle of its back there is a wide white stripe. It is a clinging bird with long bended claws, which are sharp at tips, with which it clings on the tree bark, leaning on its tail, thus the tail feathers being hard and thick.

It feeds on insects and larvae under the bark and from tree trunks, where it makes circular holes. It is also called the health agent of the mountain forests.

The Eurasian lynx (Lynx lynx), illustrated on the stamp with the face value of lei 4.50, is also called the Carpathians’ panther. Its habitat goes from the Alps, the Tatras, the Carpathians, the Balkan Peninsula and the Caucasus up to the Himalayas,SakhalinIsland, Northern India andAsia Minor.

Following the excessive hunting practiced by humans in the 19th and 20th centuries, lynxes are very rare, except the Carpathians and Sub-Carpathians areas. It is an agile carnivorous animal, which hunts in the dusk and moves stealthily. Due to its fur, which provides a special camouflage, the lynx is often hard to see. Its leaps may reach up to 6 meters. It has highly developed smell and hearing, and a very sharp sight. A less known aspect of the lynx is that it may be domesticated, behaving like a cat devoted to its owner.

The European bison (Bison bonasus), illustrated on the stamp with the face value of lei 9.10, is the heaviest terrestrial animal fromEurope.

It is a gregarious herbivore animal weighing between 440 and 920 kilos for the male and from 320 up to 640 kilos for the female, and its shoulder height reaches almost 190 cm. The body is covered by grey-brownish hair, short on the back and long in the front of the body, forming a so-called “beard” in the lower part.

The restoration of the bison fauna fund inRomaniastarted in1958 at Slivut-Hateg (Hunedoara county), where a pair of bisons was brought fromPoland. Nowadays, their descendants may be seen both in reservations (Vanatori-Neamt, Slivut-Hateg, Neagra-Bucsani) and zoos (Bucharest, Targoviste).

We thank the management of “Grigore Antipa” National Museum of Natural History for the documentary support granted in the accomplishment of this postage stamps issue. The photographic support was provided by Silviu MATEI. 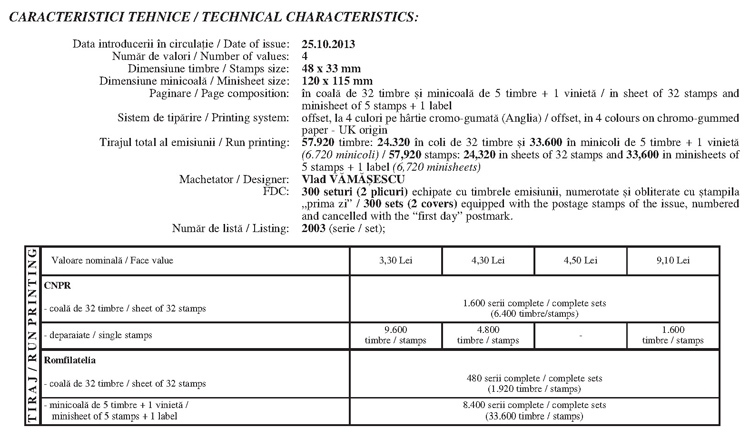