The Black Sea is an intra-continental sea, situated between South-East Europe and Minor Asia and it is neighboring Russia, the Ukraine, Romania, Bulgaria, Turkey and Georgia. By the Straits Kerci one can reach the Azov Sea, by Bosporus in the Marmara Sea, and by Dardanele Straits in the Aegean Sea and then in the Mediterranean. It is a remainder of the Sarmatic Sea and has a series of aspects unique in the world, a reason why it is also called unicum hydrobiologicum.
It has an area of 413,000 km², with the depths growing up to 2245 m. The uniqueness refers, among others, to the existence of life only up to 180 – 200 m depth, on the so-called continental platform, which is the largest near the Romanian seashore. The tides are generally of little proportions (about 12 cm). Water salinity is in the offshore of 15-22 g per liter, compared to 24-34 g‰, in other seas and oceans. In the region of the Romanian littoral, salinity decreases even more, regularly being between 7 and 12 g‰.
The Black Sea gathers the waters of several rivers and large rivers pertaining to Europe and Asia. In the European region,  the main ones are The Danube, Nistru, Nipru, Bugul de Sud and Cubanul. In Minor Asia, the main waters that flow into the Black Sea are Scaria, Enige, Chizil-Irmac and Ieşil-Irmac. Other waters that flow into the Black Sea are Coruh in Turkish Armenia, Rion, in Gruzia, Provadia and Camcia in Bulgaria etc. From a large water contribution the Black Sea benefits from the Don, by means of  the Azov Sea. The circular arrangement of the water sources and the existence of a single external connection – by Bosporus Straits with the Marmara Sea and by Dardanele Straits with the Mediterranean Sea and Planetary Ocean, along with the relatively balanced heating of water by the Sun, it causes the almost total absence of vertical marine currents and the existence of only horizontal currents on a huge circular route, which is moving to the counterclockwise sense  (N-E-S-V).
From the salinity point of view, the Black Sea is divided into the surface area and the depth area, and from the biocenotic angle, we find three zones: littoral, pelagic and abyssal.
Water temperature ranges at the surface: in summer up to 29°C, in winter it reaches 0°C. The lights penetrates to the sea open at a depth of 150-200 m. Under this depth there is no oxygen, because of a layer of sulfur-reducing bacteria, which produce carbon dioxide and sulfured hydrogen. In winter or during variations of the weather conditions, can be formed waves high of 5-10 m.  .
Fauna is mainly represented by worms, mollusks, crustaceans, fishes and dolphins in the aquatic medium and birds consuming fish, in the aerial one from the proximity and over the Pontic basin.

In the marine fauna from the Black Sea, we can find:
– Seahorse (Hypocampus hypocampus) – illustrated on the postage  stamp with the face value of  RON  0.70 .
Seahorse lives among the bushes of sea weed and among the algae, at a small distance from the shore. This little fish that seems to be a chess pawn, has 10-12 cm. It is interesting that the young grow in a pouch situated under the male abdomen, from where, after 2-3 weeks they spread into the sea water. Seahorse can change the color of its body in order to adjust to the medium and protect itself against enemies.
– Common Dolphin (Delphinus delphis) – illustrated on the postage stamp with the face value of  RON 1.50.
Common Dolphin has grey-black back, with greenish reflexes. The body sides are grey, and the abdomen is whitish. The mouth is averagely oblong, the mandible is larger than maxilla, and the forehead is a little flat in the anterior side. It eats crustaceans, mollusks cephalopods, but it also pursues the shoals of sardines, anchovy, flying fishes (in the Mediterranean Sea). It has a length ranging between 1.5-1.8 m and a weight up to 55 kg (in exceptional cases, it reaches 100 kg). The maximum life time of the species individuals is of 22 years (male) and 20 years (female). It lives long the coast, at a little depth.
– Sea Turtle (Caretta caretta) – illustrated on the postage stamp with the face value of  RON 3.10.
This species more rarely found in our country, generally has a big size, so that the adults can reach even 1.2 m and a weight up to 200 kg. As a rule, the turtle lives in the Atlantic Ocean, the Mediterranean Sea, seldom also entering the Black Sea, from where it can also get accidentally near the Romanian beaches. It has a big head, strong maxillas, and the anterior limbs are of the shape of a palette and provided with two claws. It is omnivorous, eating fish and other marine animals.
– Tub gurnard (Trigla lucerna) – illustrated on the postage stamp with the face value of  RON 7.70
Tub gurnard is a rare marine fish, which has about 65 cm and weighs almost 3 kg. Its body is vividly colored, covered with small scales. The pectoral fins that suggest the form of swallow wings, extend like bent claws, with their help the fish can also crawl on the sea bottom. For its vivid colours, tub gurnard is one of the most beautiful species of fishes from the Black Sea. 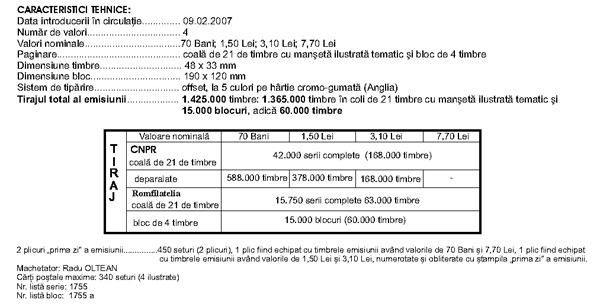