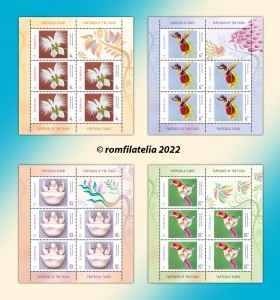 Romfilatelia continues the series of postage stamps dedicated to the Flora and introduces into circulation, on Tuesday, March 29, 2022, a series with a thematic philatelic premiere.

The issue is compound of four stamps, four minisheets, a First Day Cover and a special philatelic folder.

Diversity, in the natural environment, sometimes appears to be the result of an artist creating shapes and colors whose perfection misleads the viewer, who can attribute to a flower characteristics strongly perceived as belonging to another species, such as birds.

We are dealing with a natural, fanciful intervention of the environment, and, as such, the four postage stamps with images of rare beauty are presented under a defining title: Fantasies of the Flora.

The scientific names in Latin will be added to the descriptions of the defining characteristics.

The egret orchid (Habenaria radiata), illustrated on the stamp with the face value of Lei 4, also known as the fringed orchid or the crane orchid, has a long, slender center surrounded by two wing-like fringes.

White shade, the flower has two petals that suggest the tail of a bird. Together with a torpedo-shaped central petal, it exposes the „bird’s” body to sight. The stems are adorned with two or three flowers and reach 15-30 cm at maturity.

The flower comes from Japan, Korea, China and Russia, where it grows in swamps and meadows, in areas protected from direct sunlight. The flowers, which appear at the end of summer, last up to four weeks.

The flying duck orchid (Caleana major), depicted on the stamp with the face value of Lei 6.50, is a small plant found in southern and eastern Australia. Its flowers look like a duck in flight. It grows at ground level, in the shade of eucalyptus forests, as well as in swampy areas. It is rarely found in mountain areas. Its name is borrowed from the English botanist George Cali. Attempts to adapt the plant to domestic cultivation have failed. The plant has a short lifespan. The insects that land on the Caleana flower are captured as if in a trap that forces them to struggle to escape, ensuring the pollination of the flower. It blooms in spring and in the summer.

The angel orchid (Peristeria elata), the pigeon orchid or the flower of the „Holy Spirit”, represented on the stamp with the face value of Lei 10, grows in Panama, where it is considered the national flower. It has a unique inflorescence and is a rare orchid. It blooms once a year. Before flowering, the buds look like praying monks. After flowering, the buds turn into „pigeons”. The flower is endangered. It grows in humid forests, at heights of up to 1,000 meters, with flowering periods between June and November, after a five-year wait. 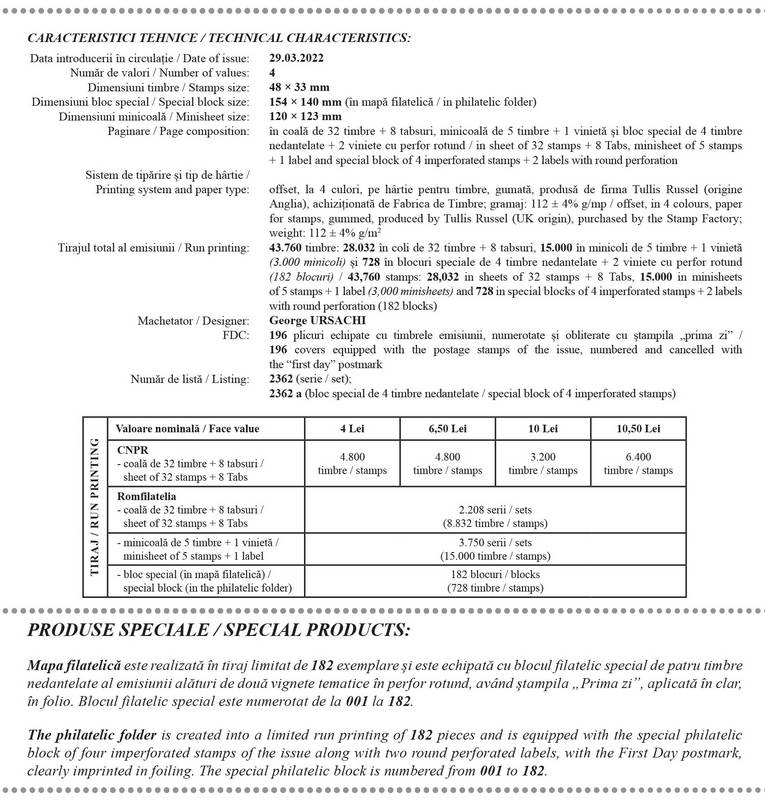