Romfilatelia continues the series of postage stamps issues dedicated to Fauna and introduces into circulation, on Wednesday, August 31st this year, an issue registered as a philatelic premiere theme entitled Fantasies of the Fauna.

Diversity, in the natural environment, is sometimes presented, apparently, as the result of an artist creating shapes and colours whose perfection misleads the viewer who can attribute to an insect characteristics strongly perceived as belonging to another species, like a flower.

We are dealing with a natural, fanciful intervention of the environment, and as a result, the four postage stamps with images of rare beauty are presented under a defining issue title: Fantasies of the Fauna.

The issue is also special for collectors in that it addresses a double theme – Flora and Fauna.

Pink orchid mantis (Hymenopus coronatus), featured as a variety of colours on the stamps with the face values of Lei 4 and Lei 10.50 and on the First Day Cover, is a species of mantis native to the tropical forests of Southeast Asia. It shows a strong sexual dimorphism, as females being, sometimes, 2 times larger than males. The coloration of this species, along with the shape of its 6 petal-like legs, make this species an excellent ambush predator.

Dead leaf mantis (Deroplatys truncata), illustrated on the stamp with the face value of Lei 6.50, is a species of mantis, also native to the tropical forests of Southeast Asia. As its name suggests, it resembles a dead leaf, which helps it both when it comes to warding off predators and for ambushing its prey.

Jewelled flower mantis (Creobroter gemmatus), rendered on the stamp with the face value of Lei 10, is a species of mantis native to Asia. Thanks to its colouring, it easily camouflages itself in the canopy of shrubs and trees, where it waits for its prey, consisting of insects.

Romfilatelia brings thanks to the specialists from the “Grigore Antipa” National Museum of Natural History and Mr. Alexandru Pintilioaie, entomologist specialist, for the documentary support granted to the development of this postage stamps issue. 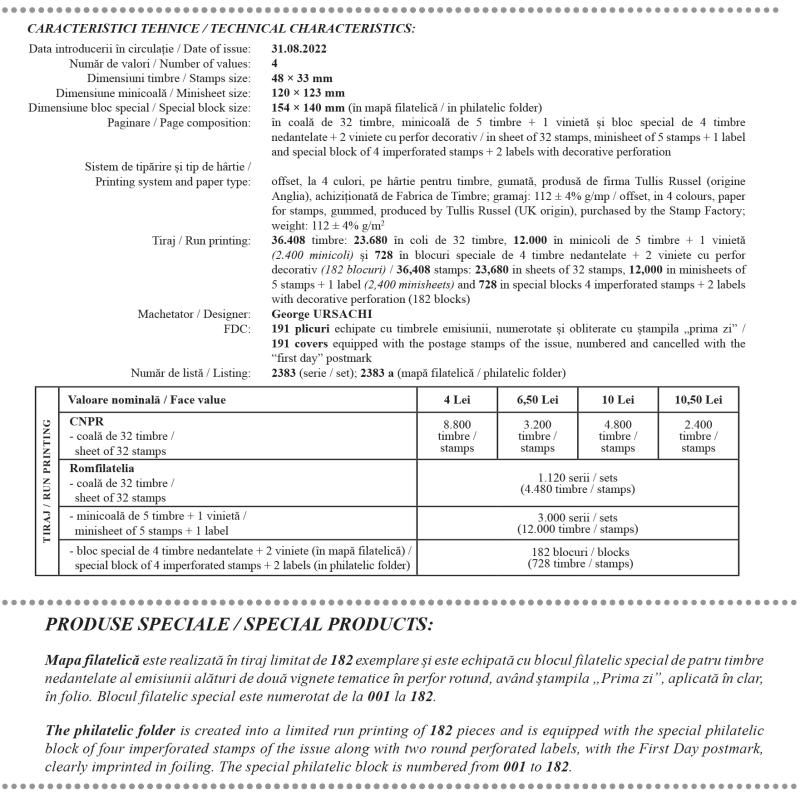