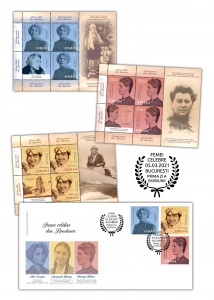 Alice Voinescu (1885-1961), illustrated on the stamp with the face value of Lei 1.40, was the first Romanian female doctor of philosophy. A writer, translator and theatre critic, she graduated from the Faculty of Letters and Philosophy in Bucharest, and in 1913 she obtained her Ph.D. in philosophy at the Sorbonne University in Paris, thus becoming the first woman in Romania with a Ph.D. in this subject. She received offers of employment in universities in France and the USA, but she refused them, returning to Romania. At the beginning of the twentieth century, becoming a university professor of philosophy in the country proved impossible – such positions were the prerogative of men – so she focused on the aesthetics and history of theatre, becoming, in 1922, tenure-track professor at the Conservatory of Music and Dramatic Art in Bucharest.

After the communists took power, because she had disagreed with the authorities’ policy, her existence became extremely difficult: in 1948, she was forced to retire, and in 1951, she was arrested and spent a year and seven months in prison. She then had a compulsory residence in Costesti Township, Iasi County, until 1954. After returning to Bucharest, she survived due to a small pension and the earnings obtained from her work as a translator. She remained in the history of the Romanian culture through the books of philosophy, aesthetics and theatre she published, but also through her remarkable Journal, which includes, in addition to events from her own life, document-pages about people and events from the interwar period and the communist period.

Smaranda Brăescu (1897-1948), represented on the stamp with the face value of Lei 1.50, was the first female parachutist with a license in Romania and held, in the 1930s, skydiving (parachuting) world records. She became passionate about aviation from a young age and took specialized courses in Germany, obtaining the international skydiving license.  On October 2nd, 1931, she set her first record, which she wanted to achieve in Romania: she broke the women’s world record and the European men’s parachute jump record, jumping from a height of 6,000 m. Then, her ambition took her further, in America, to try to break the absolute world record. After hard training and great difficulties in obtaining a plane and the authorization to perform the jump, she succeeded. On May 19th, 1932, in Sacramento, USA, she set a new skydiving world record: 7,233 m. Later, she obtained the pilot license, and during the Second World War she worked in Romania as a skydiving instructor and as a volunteer pilot in medical aviation. Sentenced in absentia to imprisonment by the communist regime for signing a protest against the forgery of the 1946 elections, she was forced to hide for years under an alias, until she died in 1948. Even if at present the skydiving world record is over 41,000 m, Smaranda Braescu’s performances remain exceptional for that time. For the world records she obtained, she was declared, in 1932, the “World No. 1 Sportswoman”.

By enrolling in the Faculty of Law in Sorbonne, she became the first woman to attend this faculty. Her colleagues readily accepted her; on the other hand, not all teaching staff members were equally unprejudiced: some went so far as to forbid her from attending their classes.

However, Sarmiza Bilcescu persevere, took her exams with success, obtaining a Bachelor’s degree in legal sciences
in 1887, and in 1890 she became the first woman in the world to obtain an academic doctorate in law, with the thesis “On the Legal Condition of the Mother in the Romanian and French Law”, in which she pleaded for equality between woman and man in marriage and in terms of rights over the child.

Returning to Romania, she applied for membership in the Ilfov Bar. Although her application confused the teaching staff members, it was accepted, Sarmiza Bilcescu thus becoming, in 1891, the first woman lawyer in Romania. However, she did not practice law, because the mentality of the clients determined them to turn to male lawyers. Instead, she dedicated herself to philanthropic activity, to improving the condition and rights of women, to education, and promotion of Romanian culture.

Romfilatelia thanks the Library of the Romanian Academy, the National Museum of Romanian Literature and the Romanian Association for Propaganda and History of Aeronautics (ARPIA), for their documentary support in developing this postage stamps issue.

The postage stamps issue “Famous Women from Romania” will be available on Friday, March 5th 2021, in Romfilatelia’s shops network in Bucharest, Bacau, Brasov, Cluj-Napoca, Iasi and Timisoara and online on https://romfilatelia.ro/store/.  The postage stamps issue is completed by the “first day” cover, in sheet of 28 stamps and minisheet of 3 stamps + 1 label + illustrated border. 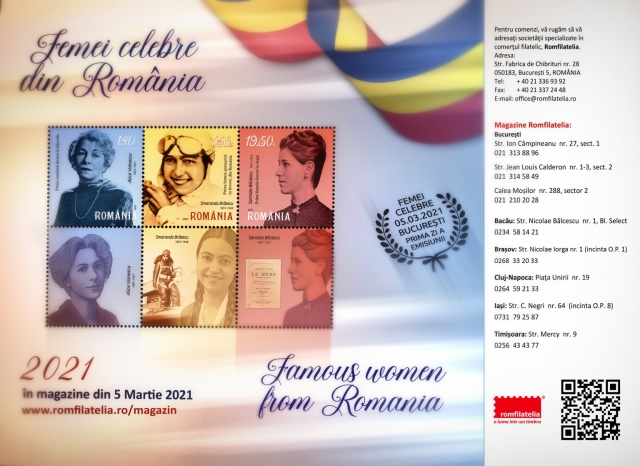 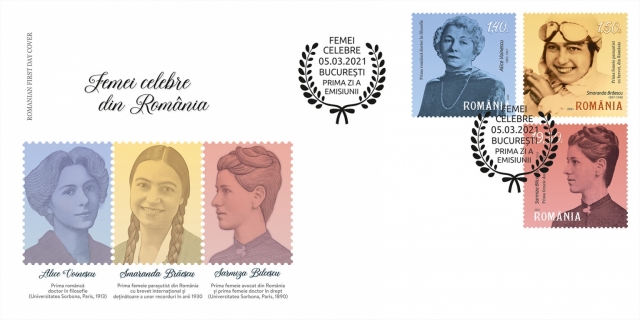 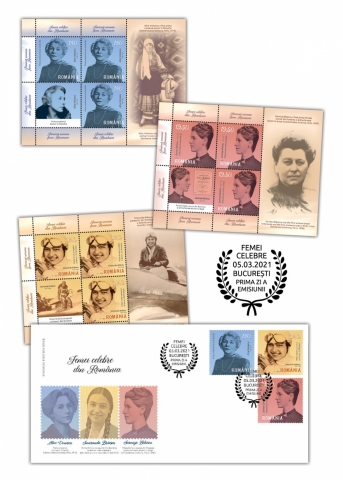 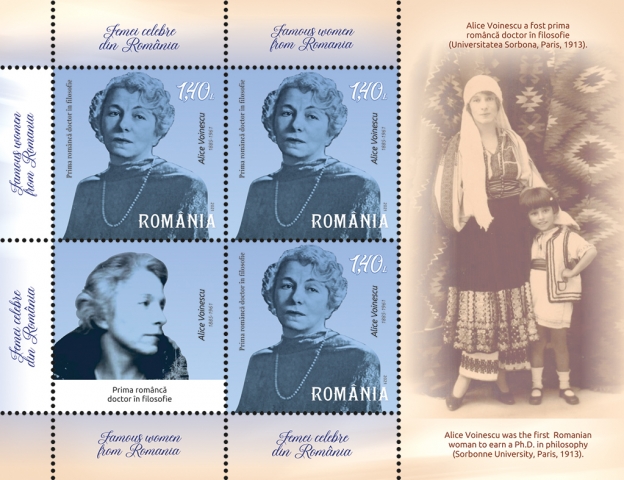 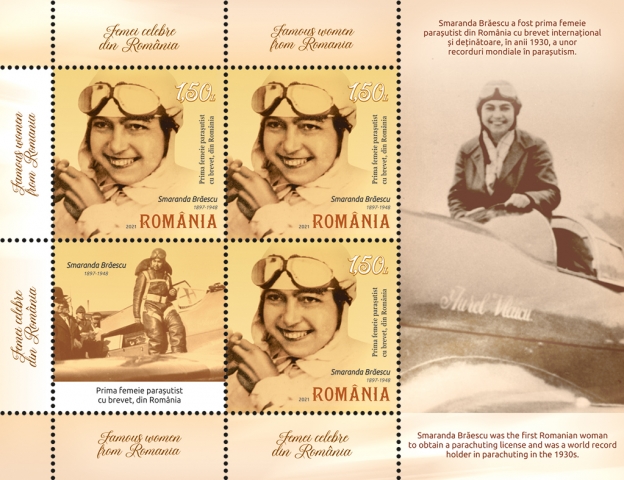 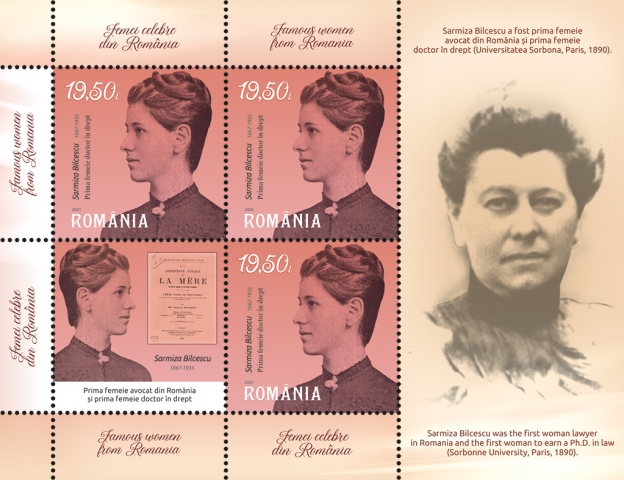 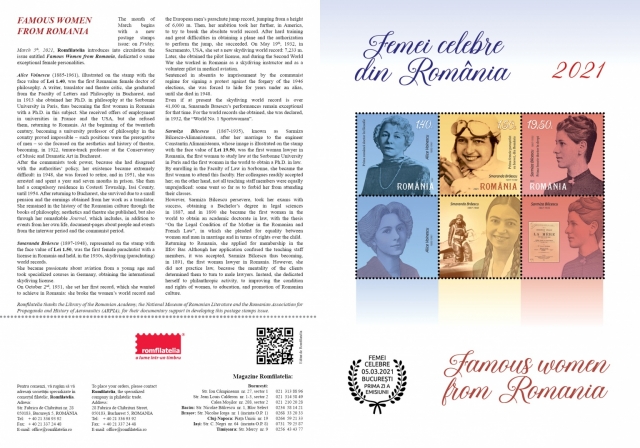 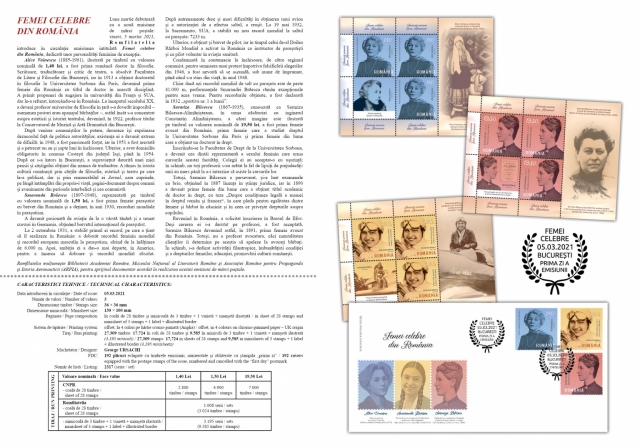 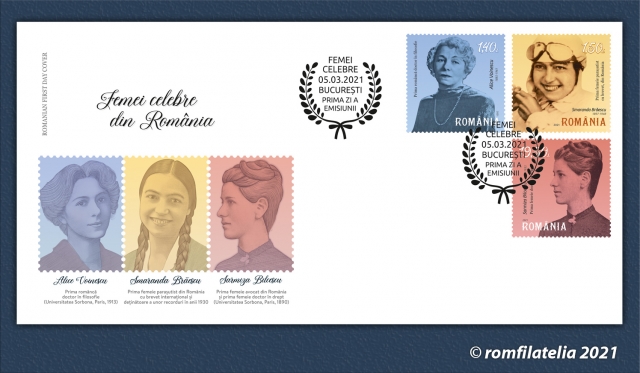 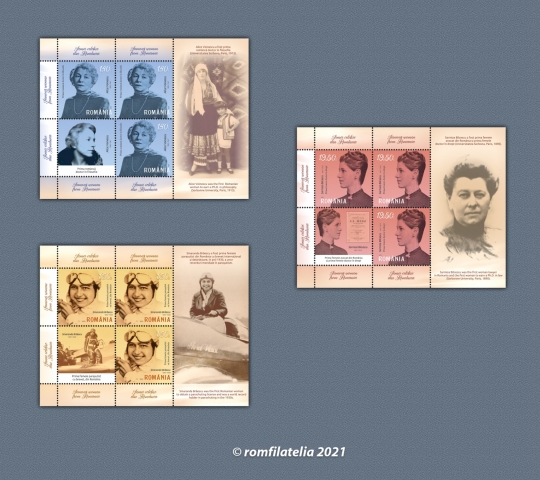 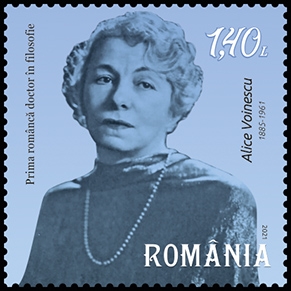 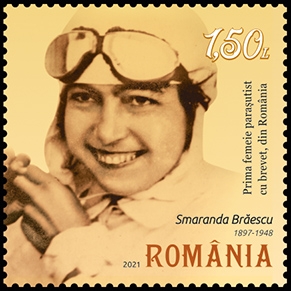 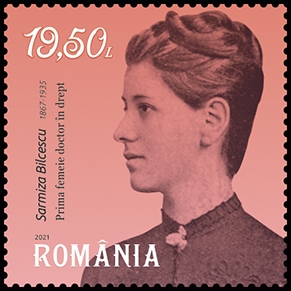