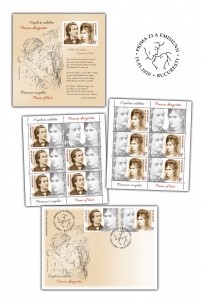 About “The evening star of Romanian poetry” it is worth mentioning the words of Mircea Eliade: “For us, Eminescu is not only the greatest poet of ours and the most brilliant genius that was created by the Romanian soil, waters and sky. He is, in a way, the very embodiment of this heaven and this earth, with all the beauties, pains and hopes raised from them”.

A feminine presence intervened in the life of the great poet, which marked his existence. Its name is clearly mentioned in a versification in the folkloric manner: “Dearest Veronica, / Look at the private leaf/ It is as our whole life;” The love relationship between the poet and Veronica Micle (married at the age of 14 with the elder professor Stefan Micle) is confirmed by the words of Virginia Micle (Veronica’s daughter): “My mother loved Eminescu with an unlimited love”.

In 1883, the disease that was to be fatal, six years later, began for Mihai Eminescu. The diagnosis then made by the doctors from Dr. Sutu’s Sanatorium, from Bucharest, was “manic-depressive psychosis”.

He was sent by doctors for treatment in Vienna, then through Italy, returning to Iasi only after a year. Months of treatment and recovery followed, and in 1887 he arrived in the care of his sister, Henrieta, in Botosani. During this time, Veronica moved to Bucharest with her children and tried to persuade him to return to the Capital, in order to be better cared for. She managed to get him to come to Bucharest only in April 1888. Late on the morning of June 15th, 1989, the poet died in the sanatorium of Dr. Sutu.

The last time Veronica saw her paramour was in the summer of 1888. The poet’s condition worsened due to the medical treatment which was, if not ill-intentioned, at least inadequate. Veronica does not want to see him in this state, she wants to keep the memory of Eminescu in “the most splendid era of his intellectual life. And so, I am without any law and without any God, to remain at least that one of poetry, which for me, was embodied in Eminescu’s being”.  Veronica could not forget him and on August 4th, 1889 took her own life. The suicide, the result of arsenic poisoning, occurred at the Varatec Monastery, where she had retired. A premeditated suicide fixed at 50 days after the death of her love, Mihai Eminescu.

The postage stamps issue “Famous couples. Poem of love to mark National Culture Day” will be available on Wednesday, January 15th 2020, in Romfilatelia’s shops network in Bucharest, Bacau, Brasov, Cluj-Napoca, Iasi and Timisoara and online on https://romfilatelia.ro/store/. The postage stamps issue is completed by 1 “first day” cover, and as page composition, in sheet of 32 stamps, minisheet of 5 stamps + 1 label and imperforated souvenir sheet. 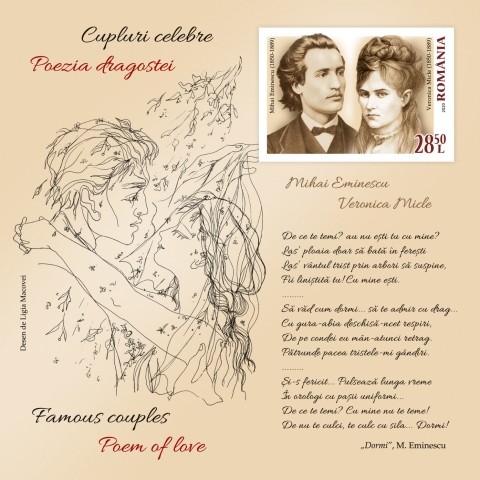 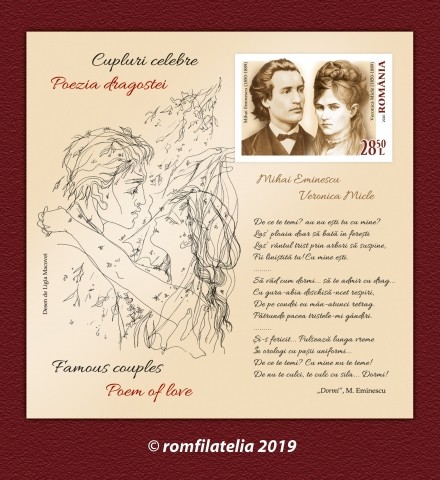 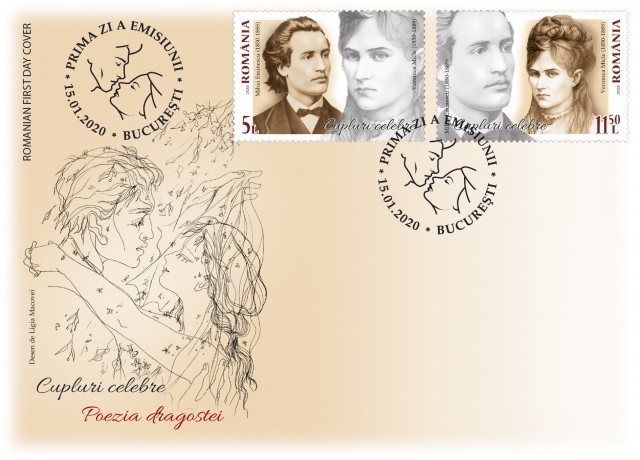 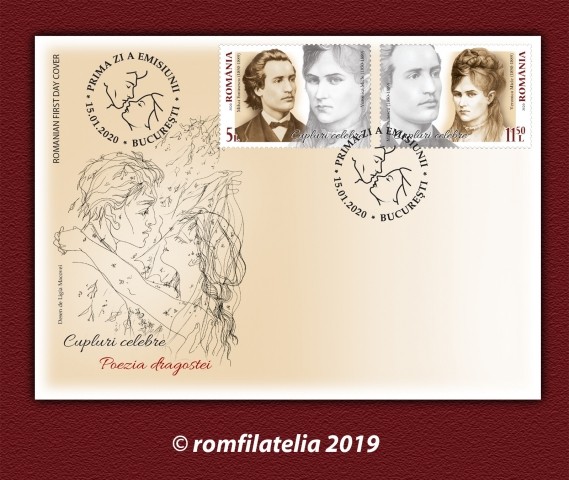 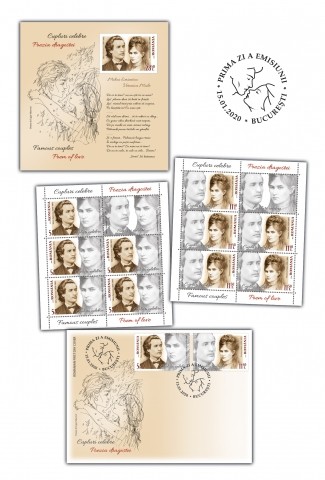 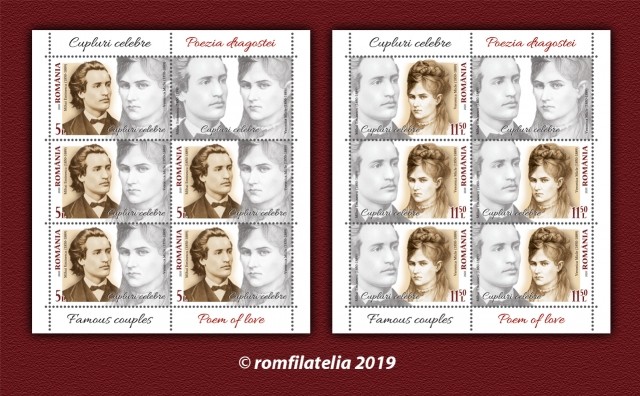 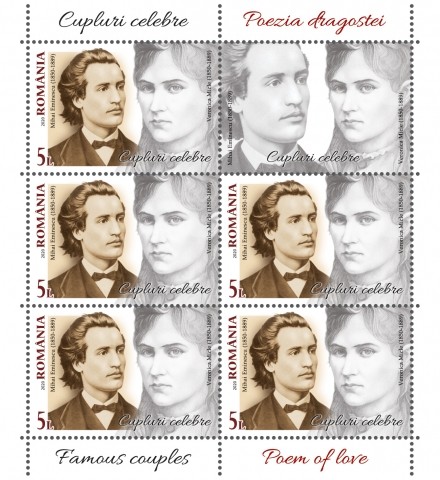 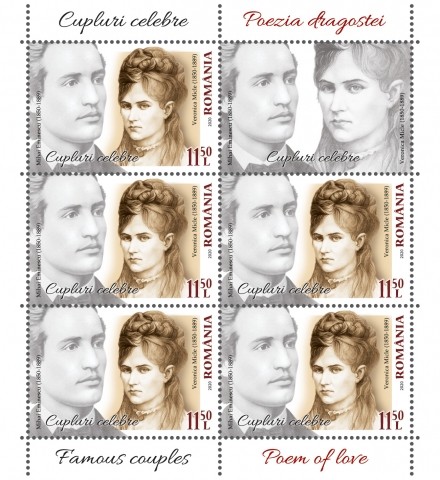 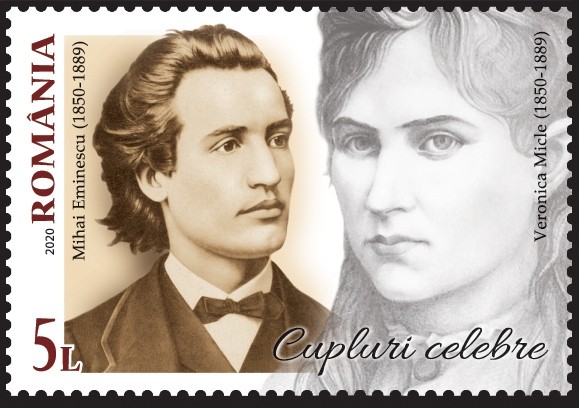 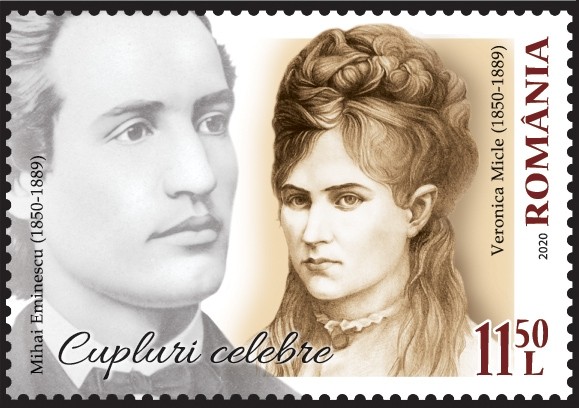