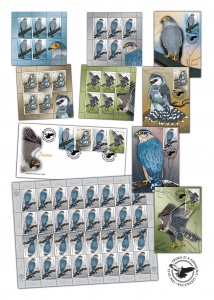 Falcons are diurnal birds of prey, very good fliers, agile and fast; their long, tapered wings allow them to fly at high speed and quickly change direction in flight. They live on all continents, except for Antarctica, in a variety of habitats, from polar tundra to tropical forests.

The largest species – the gyrfalcon – can reach 65 cm in length; the smallest, the pygmy falcon, is only 20 cm. As with other diurnal raptors, in most species of falcons, females are larger than males, which allows hunting for a wider range of prey, of different sizes. Falcons have exceptional visual acuity, which helps them see small prey from tens of meters high.

There is a privileged relationship between humans and falcons: for centuries, many of the falcon species have been used by man in a special activity, whose name is linked to the very name of these birds – hunting with falcons or falconry.

The barred forest falcon (Micrastur ruficollis) appears on the stamp with the face value of Lei 2.20. It is a raptor that lives in tropical and subtropical areas of Central and South America, especially in forests. It hunts small birds and mammals, snakes and lizards. It does not build nests, but lays eggs in tree hollows.

The pygmy falcon (Polihierax semitorquatus)  is represented on the stamp with the face value of Lei 2.60. It is a small falcon species (19-20 cm in length), native to eastern and southern Africa. It feeds on insects, small reptiles and mammals.

The merlin (Falco columbarius) is represented on the stamp with the face value of Lei 5.50. It is a small falcon species, widespread in the Northern Hemisphere. Males have a wingspan (distance between the tips of the outstretched wings) of 53-58 cm, females are slightly larger. It is an agile flier, adapted for hunting small birds.

The peregrine falcon (Falco peregrinus) is illustrated on the stamp with the face value of Lei 19.50 and on the First Day Cover of the issue. It is a large species (up to 120 cm in wingspan), widespread throughout the world.

It lives in a wide variety of environments, from the Arctic tundra to the open areas of the tropics. It feeds almost exclusively on medium-sized birds. It can reach speeds of over 300 km/h, being considered the fastest animal on Earth.

The postage stamps issue “Falcons” will be available on Friday, February 12th 2021, in Romfilatelia’s shops network in Bucharest, Bacau, Brasov, Cluj-Napoca, Iasi and Timisoara and online on https://romfilatelia.ro/store/.

The postage stamps issue is completed by the “first day” cover, sheet of 32 stamps with tęte-bęche and minisheet of 5 stamps + 1 label. 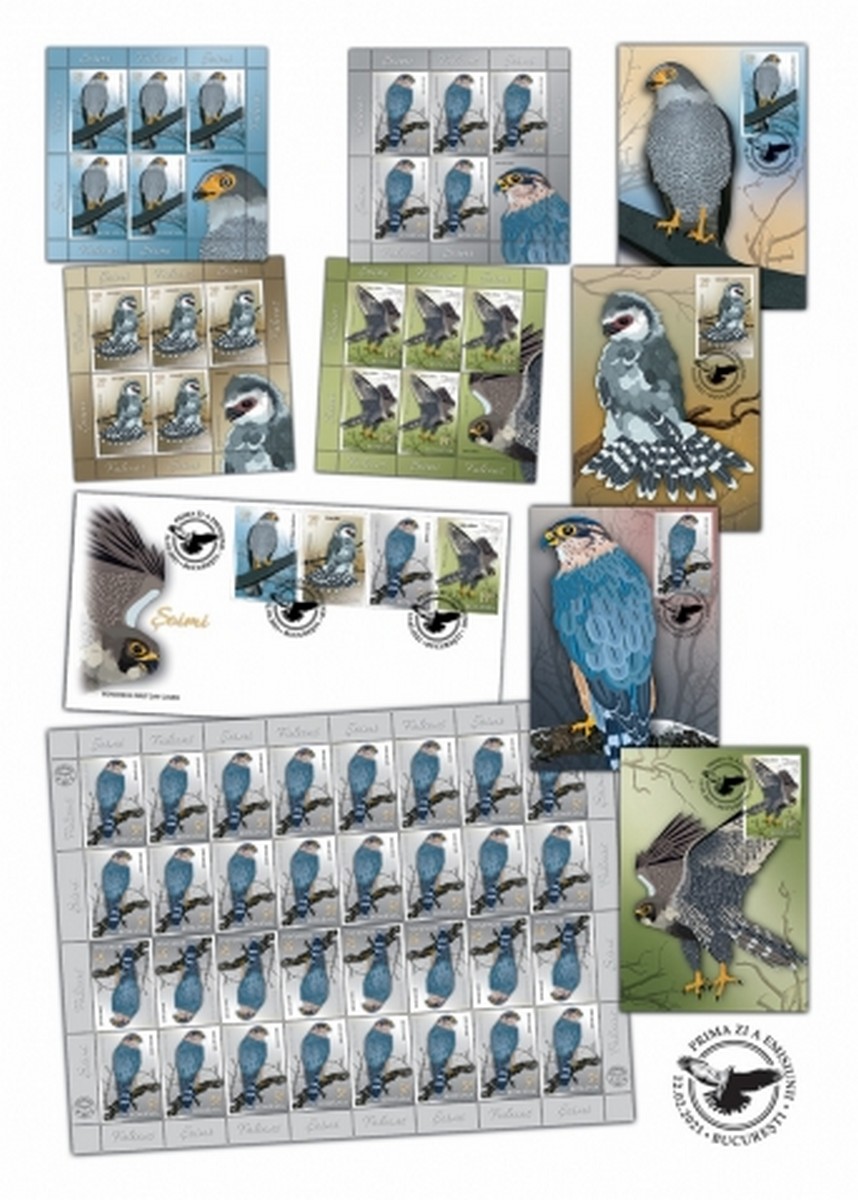 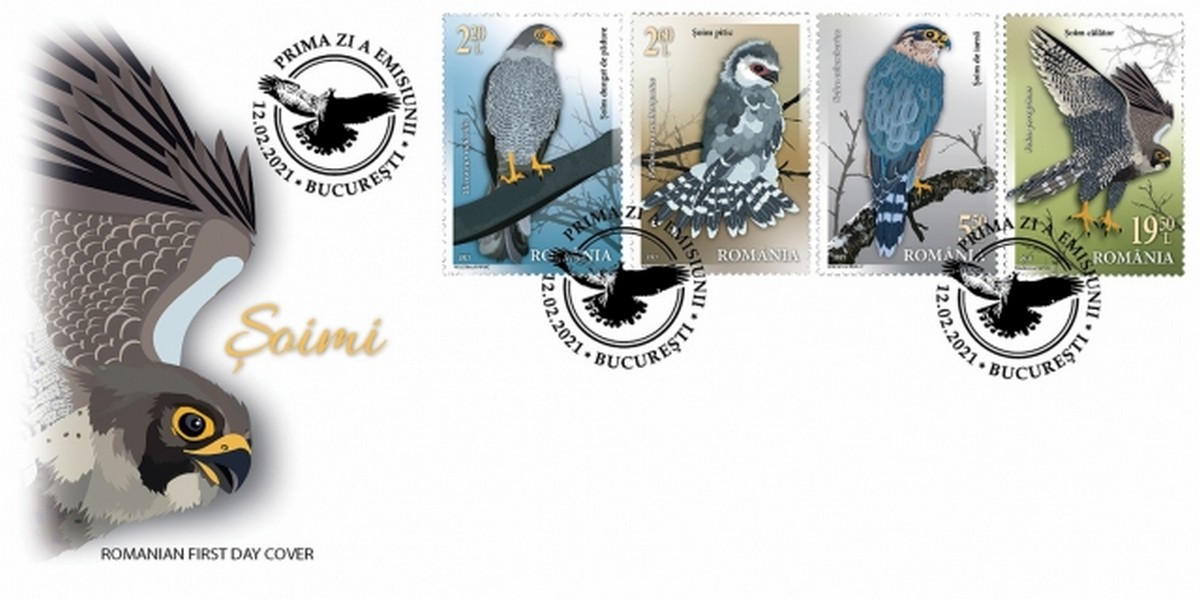 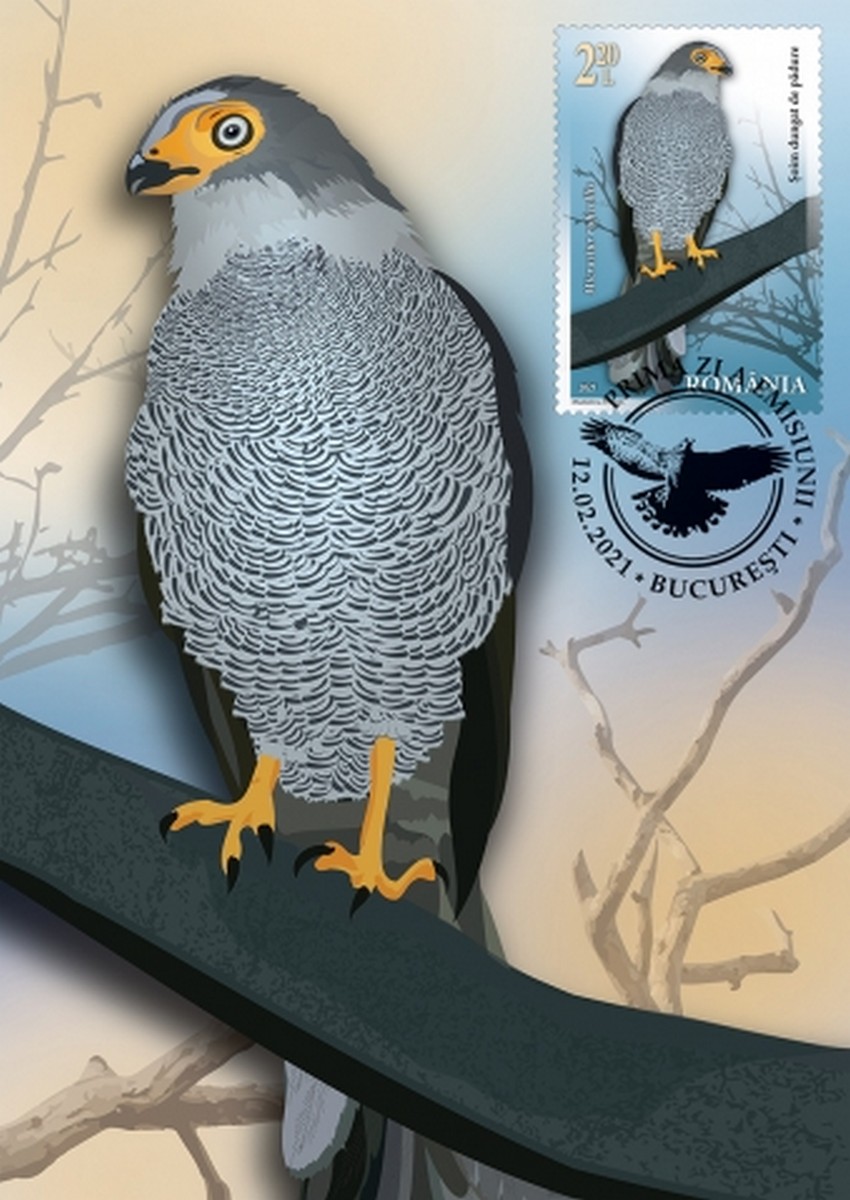 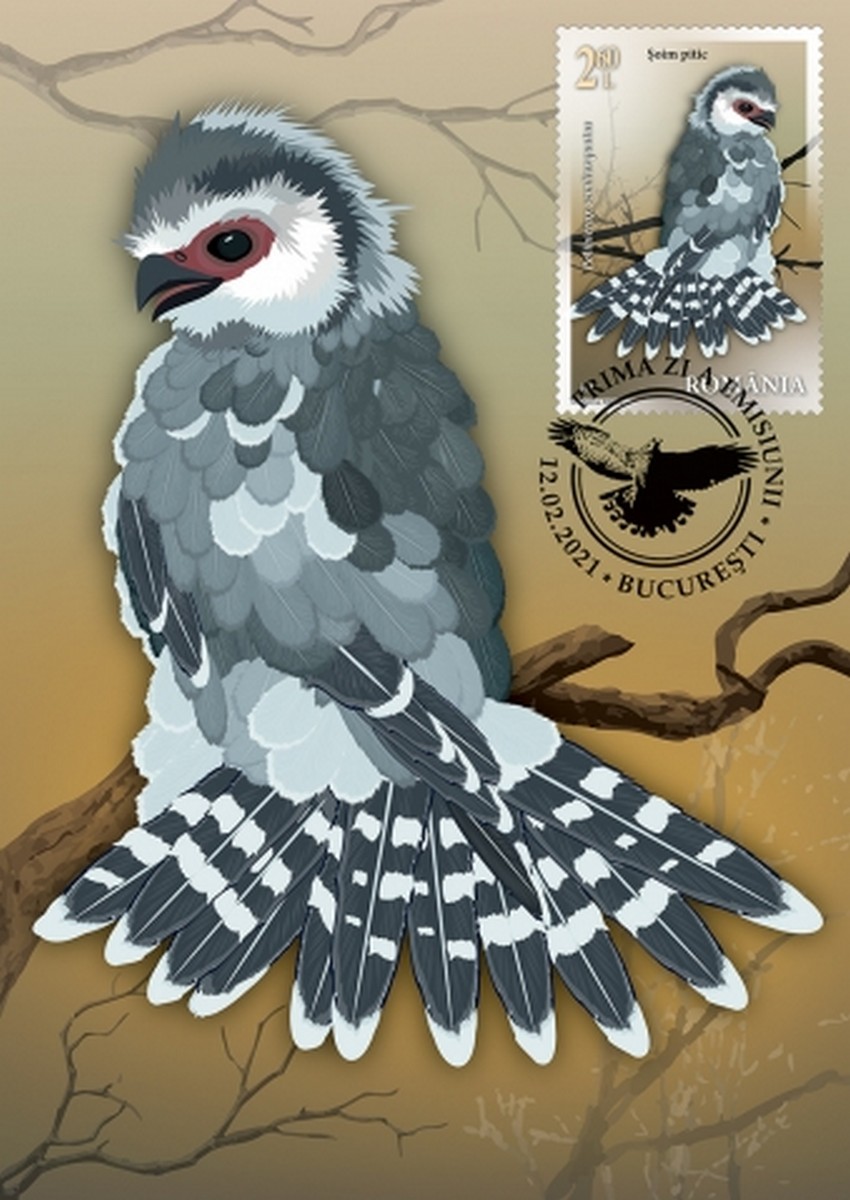 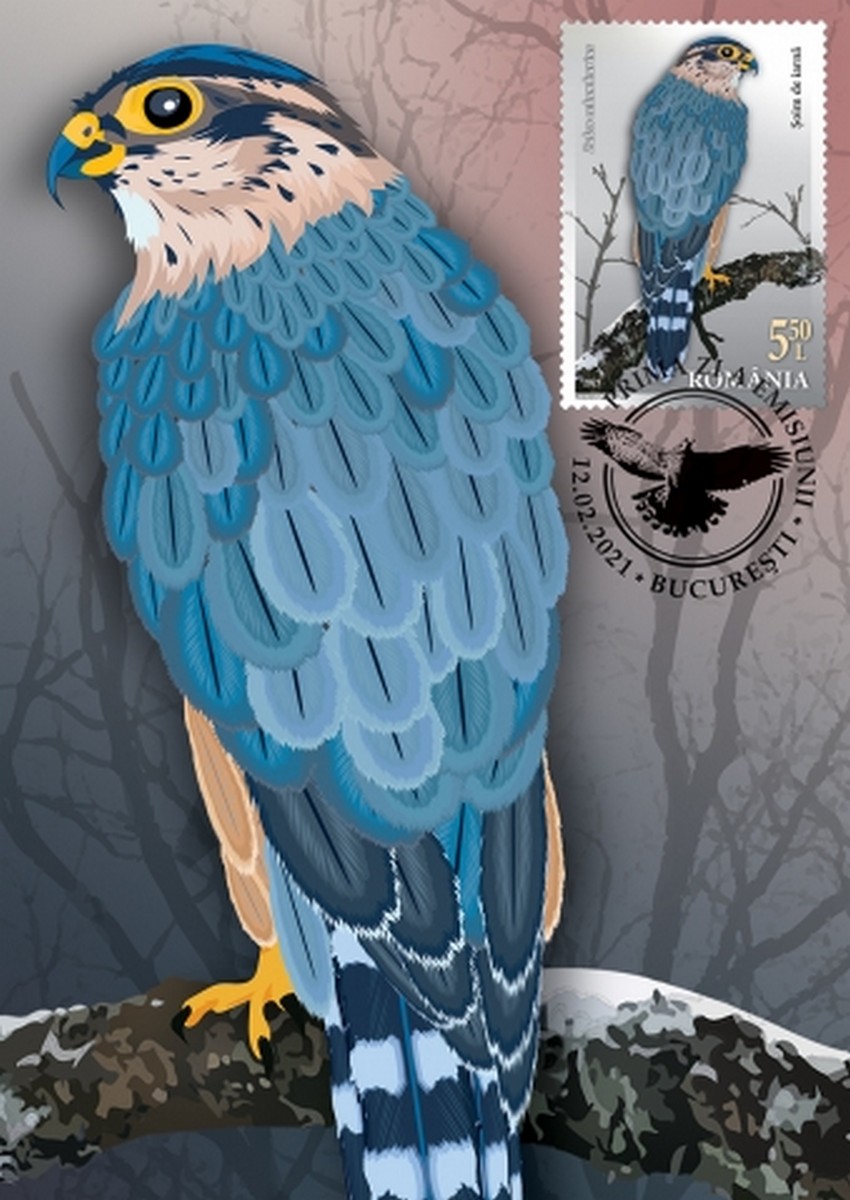 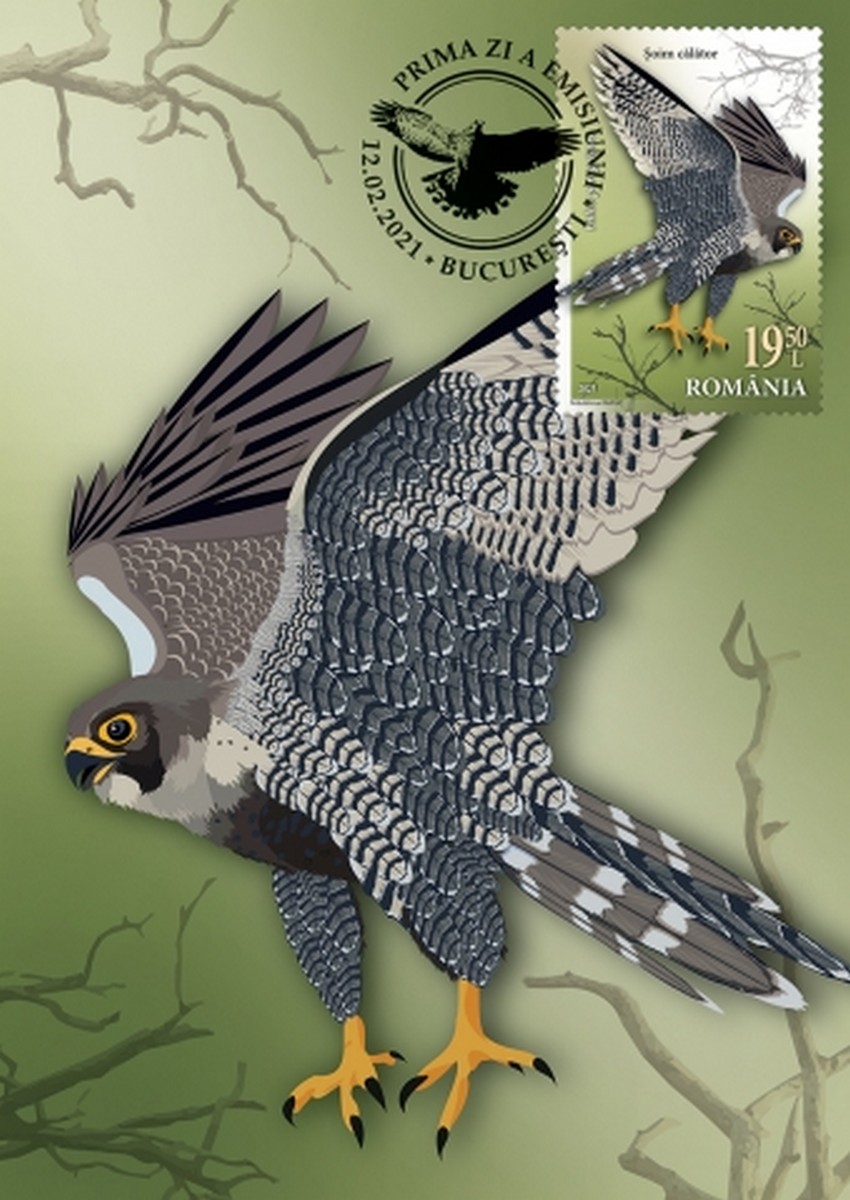 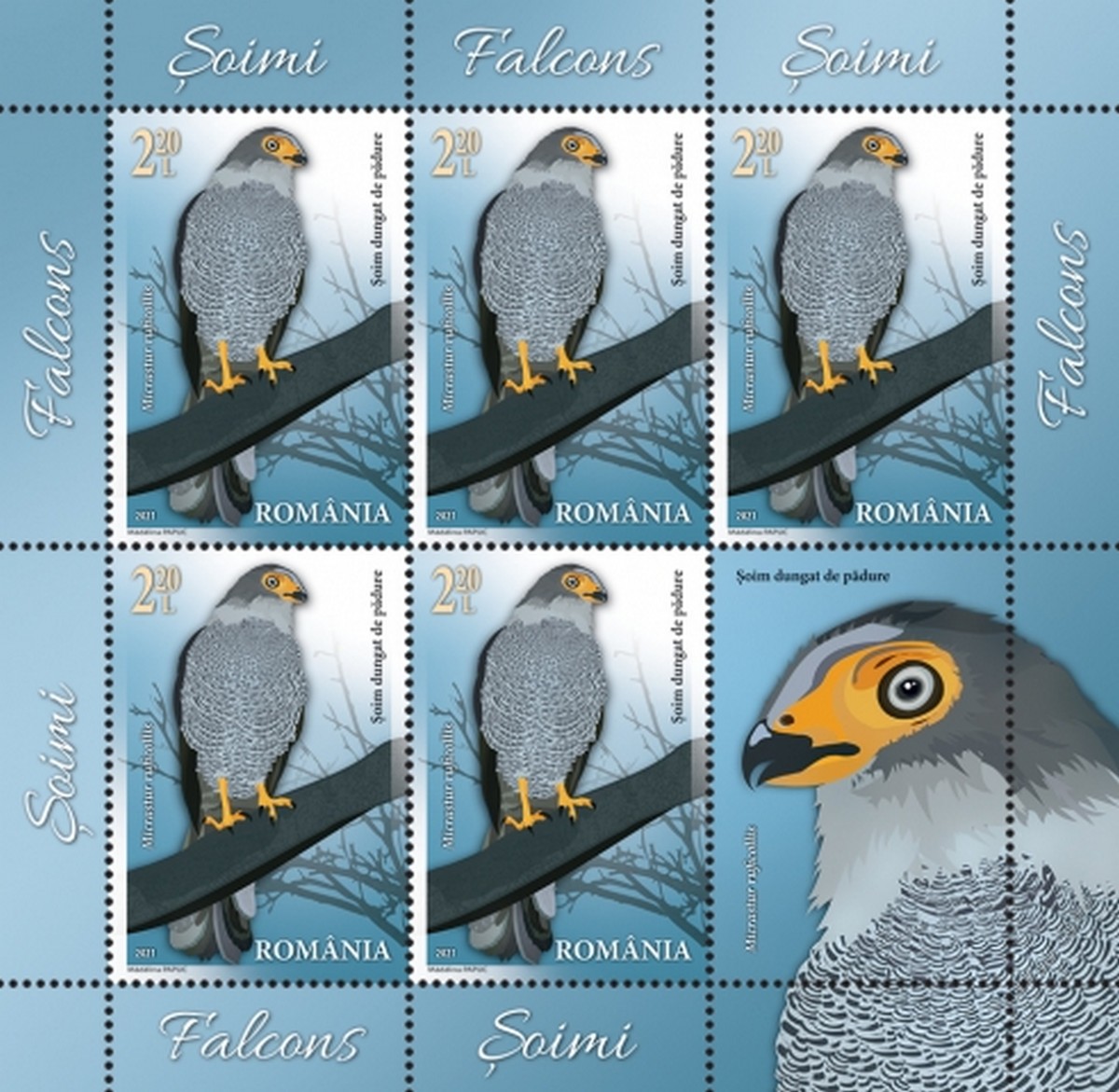 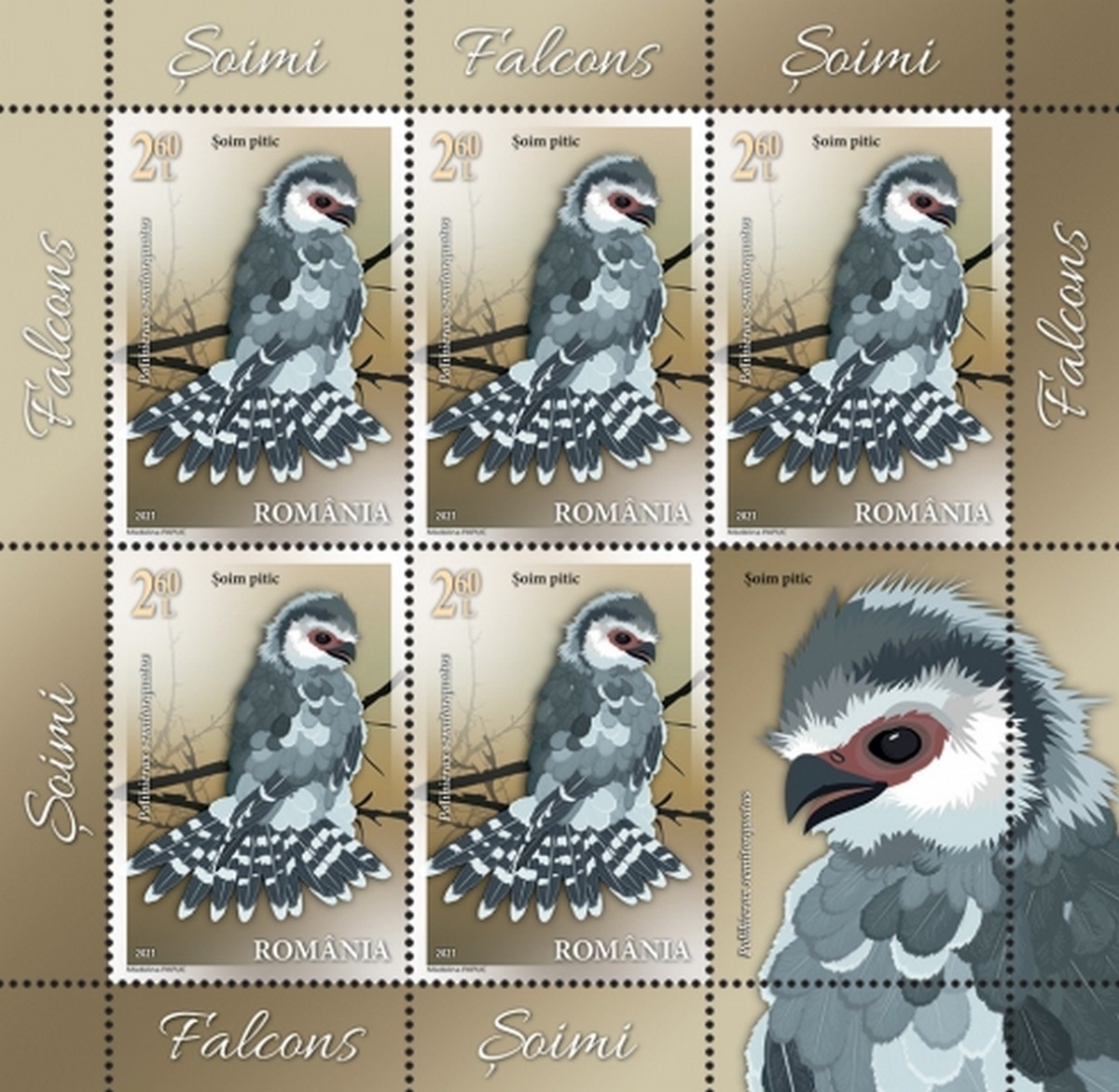 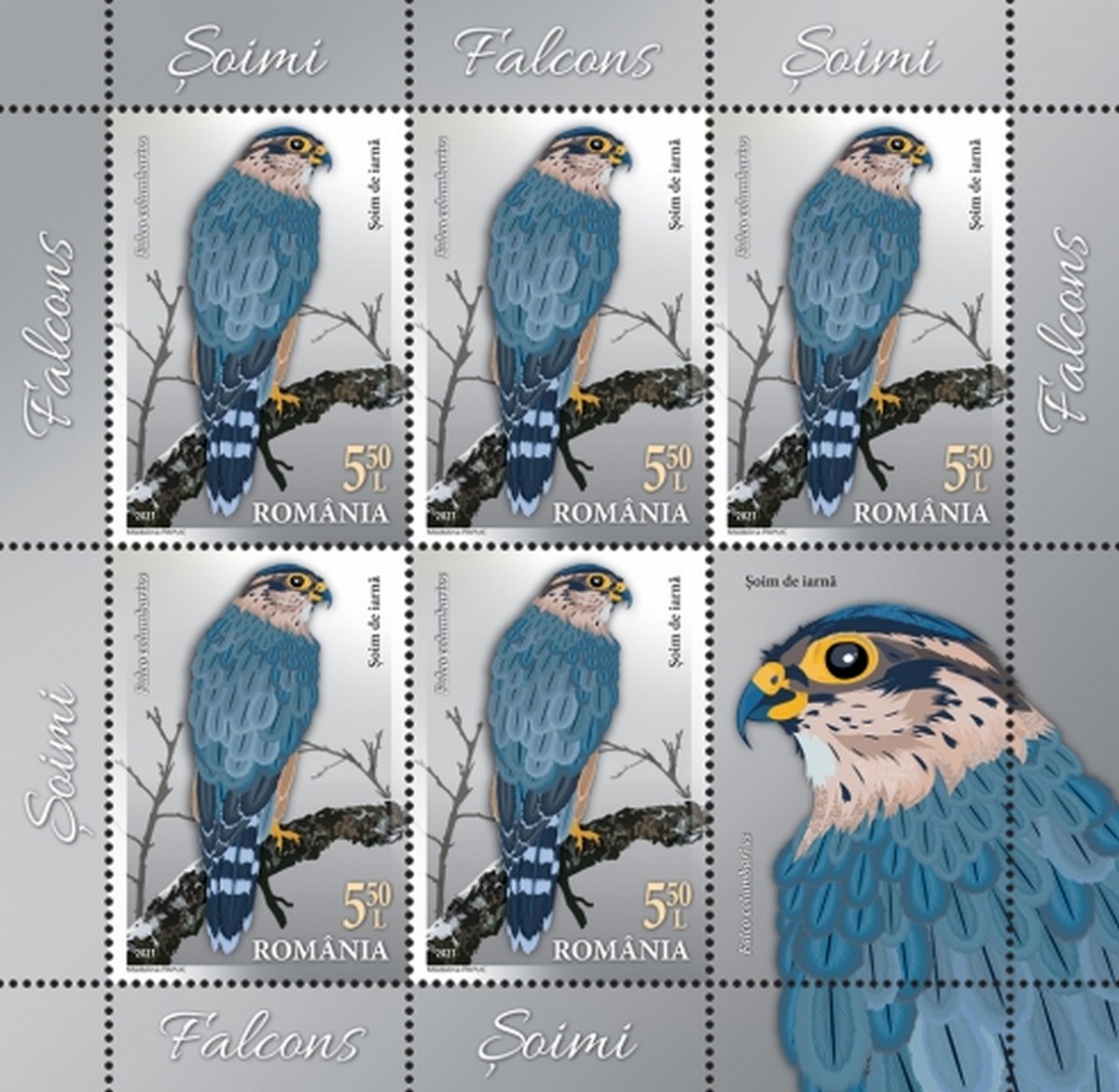 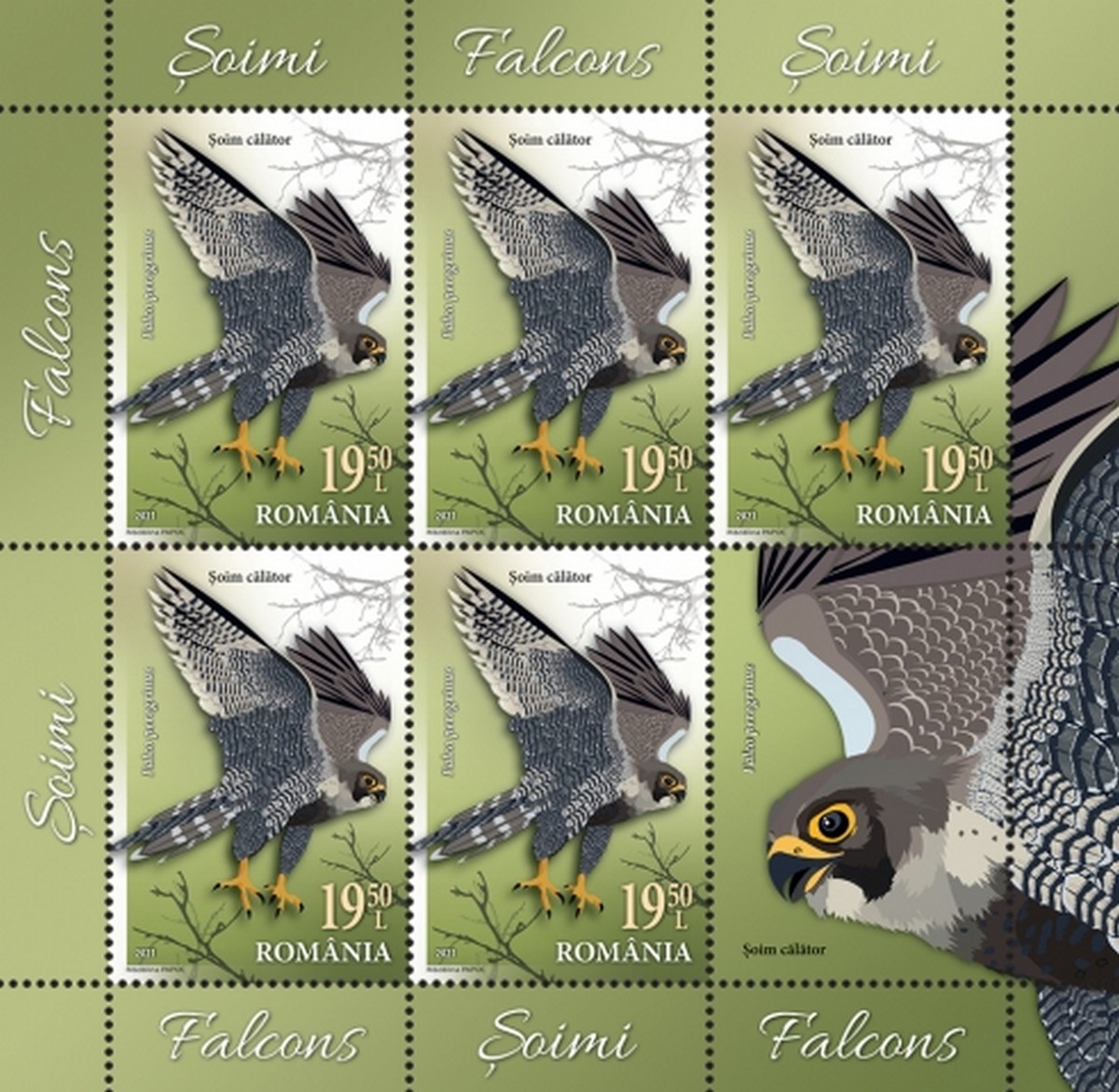 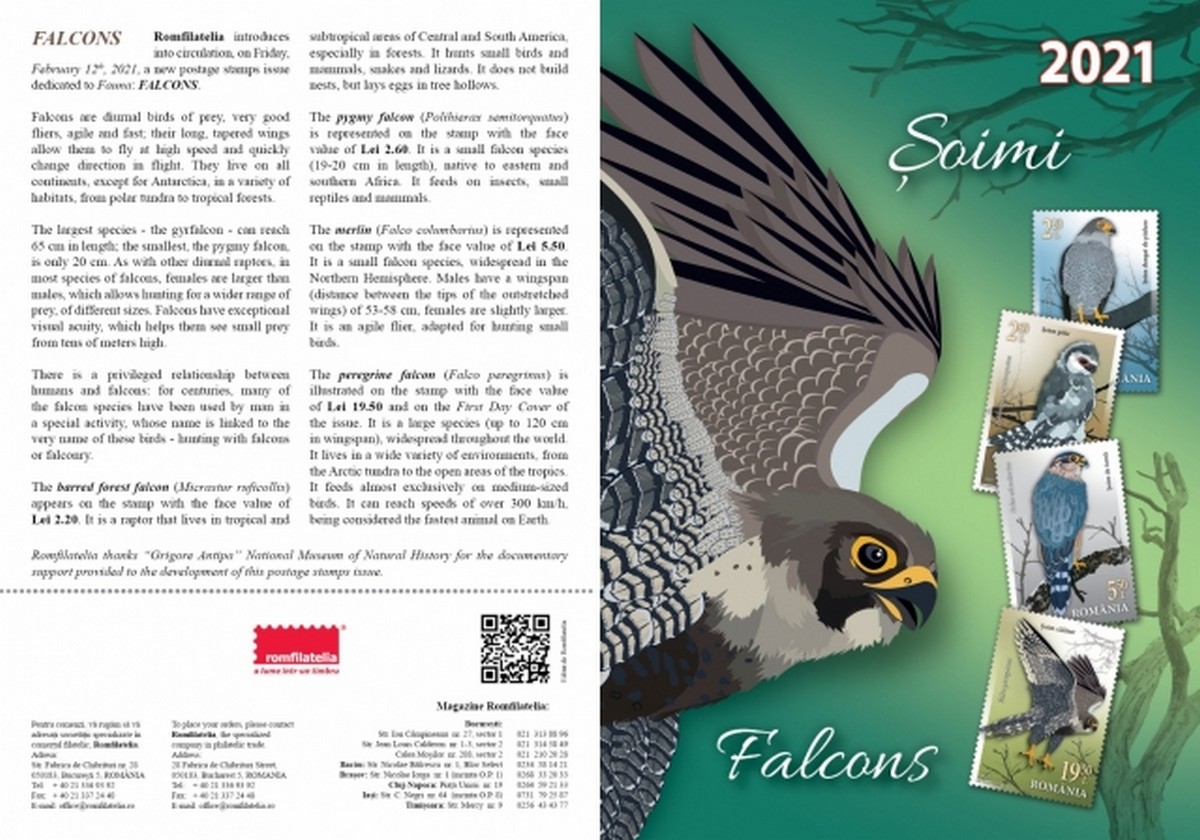 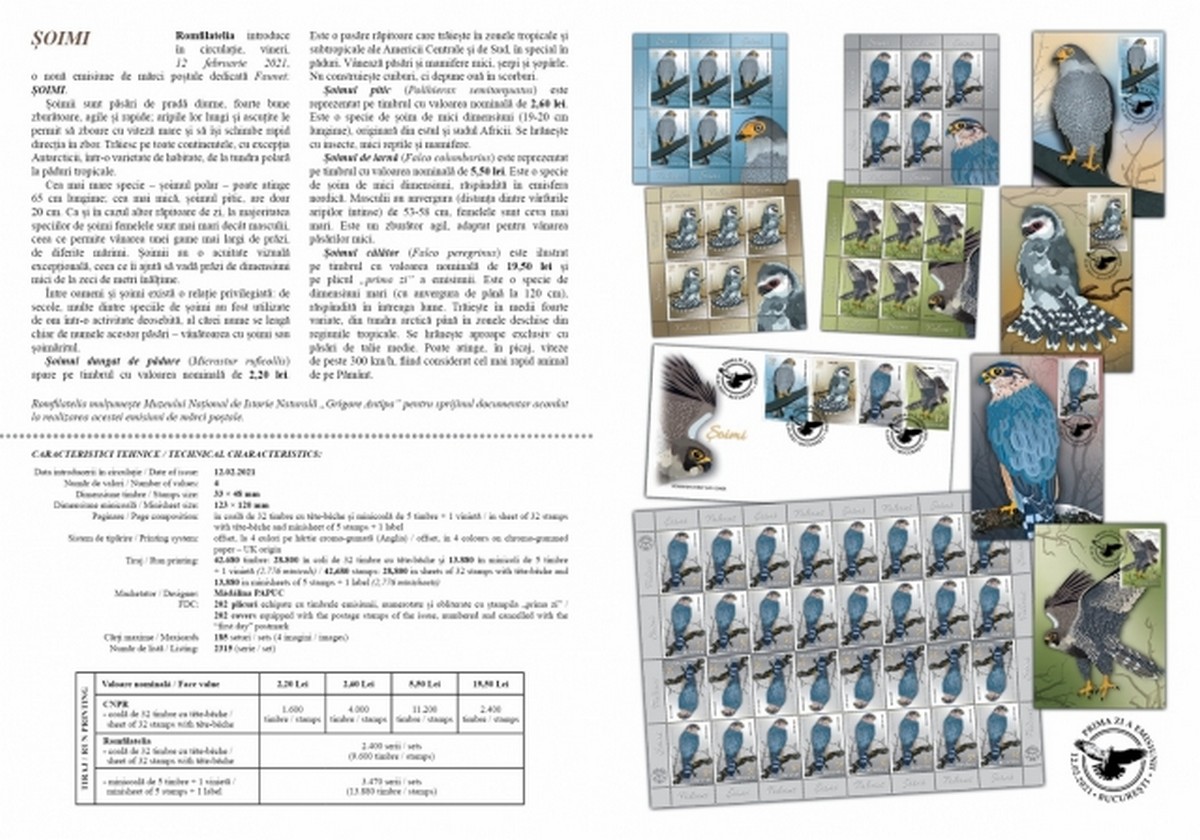 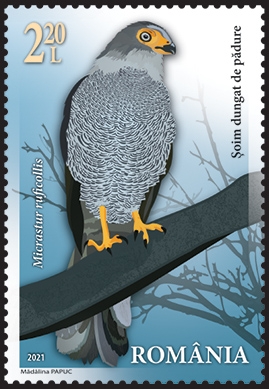 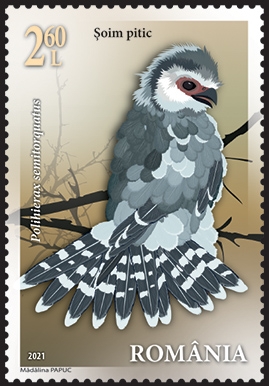 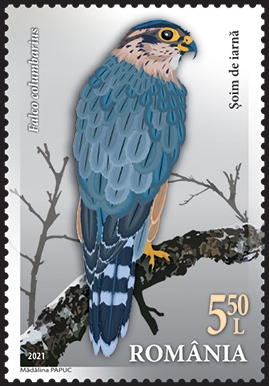 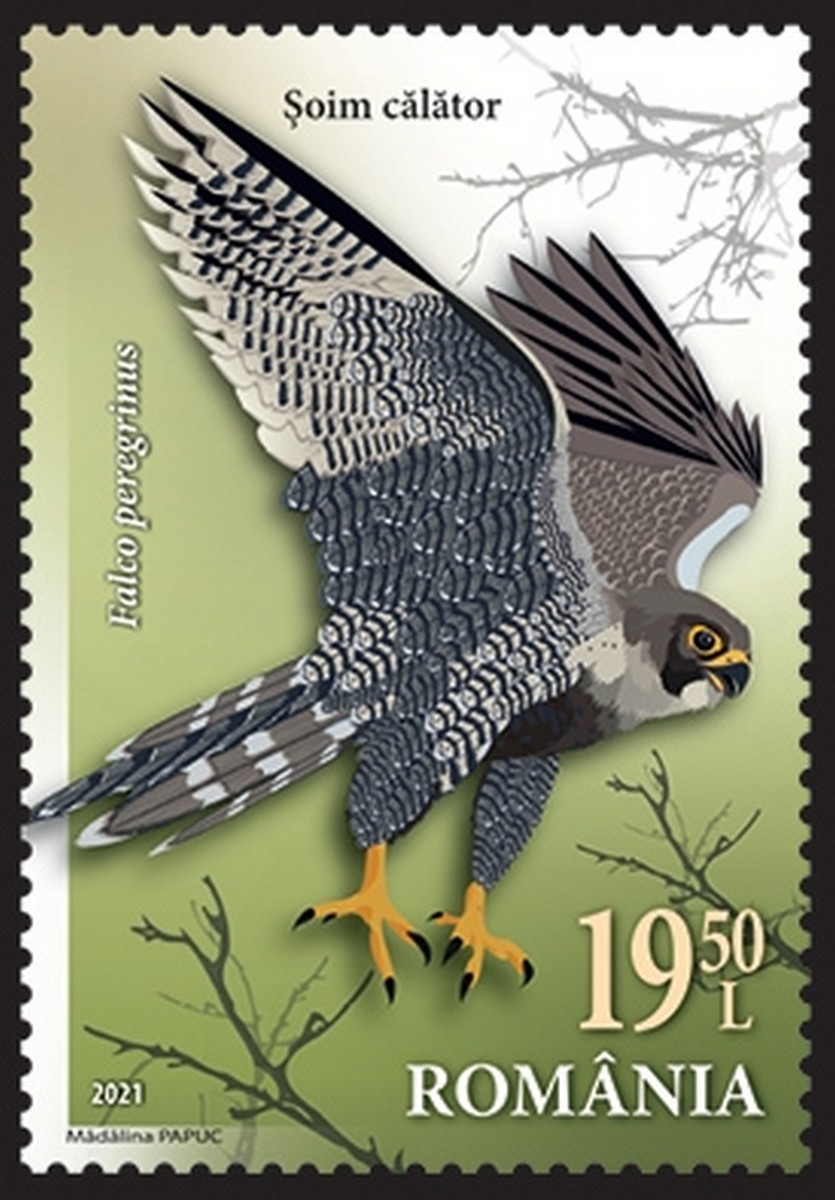