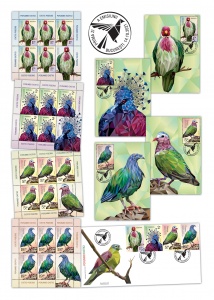 Romfilatelia introduces into circulation, on Thursday, 14th of October, 2021, a new postage stamps issue dedicated to the Fauna: Exotic pigeons.

Pigeons are birds belonging to Columbidae family. One of the species of this family, the rock dove (Columba livia), has been domesticated and bred by humans for several thousand years, numbering more than 1,000 breeds. Apart from these domestic pigeons, there are more than 300 wild species distributed through numerous environments, from deserts to thick forests, from the temperate to the tropical regions. Many of them stand out by their spectacular plumage in vivid colours, sometimes with long ornamental feathers on head and neck. Some species exhibit sexual dimorphism (physical appearance differences between males and females), the males having generally the plumage in more vivid and diverse colours.  Many of the exotic species of wild pigeons are threatened by the changes occurred in their environment, especially the accelerated destruction of forests, and they make the object of some protection programmes.

The four stamps of the issue present Asian pigeon species.

The stamp with the face value of Lei 1.70 presents the jambu fruit dove (Ptilinopus jambu). It lives in Thailand, Malaysia, and Brunei and on several of the islands of the Indonesian Archipelago. It is 23-27 cm long. This is a shy bird difficult to observe as it stays hidden among the leaves of the trees where its green colour allows it to camouflage. It eats mainly fruits. Since it lives in forests, it is affected by the massive deforestation taking place in its habitat and it is been considered an near endangered species.

The stamp with the face value of Lei 2 presents the Victoria crowned pigeon (Goura victoria). It lives in the New Guinea Island and the surrounding islands, in flooded forests from the lower regions. This is a big size pigeon, 75-80 cm long. It spends much time on the ground eating fruits fallen from the trees, and sometimes seeds and small invertebrates. This is a near endangered species, the main threats being the deforestation (resulting in the reduction of forests), hunting (for meat and feathers) and catching in order to be kept as an ornamental bird.

The stamp with the face value of Lei 5.50 presents the common emerald dove (Chalcophaps indica), a species native to the tropical and subtropical regions of South-East Asia and the Indian subcontinent. It is 23-27 cm long. It feeds on seeds and fruits coming from a diverse range of plants, and it is frequently encountered in lowland forests and mangroves, as well as in gardens, on farms and plantations.

The stamp with the face value of Lei 19.50 presents the Nicobar pigeon (Caloenas nicobarica). This species lives on numerous islands of the Indian Ocean and Pacific Ocean (among which Nicobar Islands situated at East of India) and in coastal areas of South-East Asia. This is a large pigeon measuring 40 cm in length. These birds usually live in colonies; they eat fruits, seeds and buds while flying from one island to another in search for food. The reduction of habitats, hunting and catching for clandestine trade lead to the decrease of their number and this is a near endangered species.

On the First Day Cover of this issue the thick-billed green pigeon (Treron curvirostra) is illustrated; it is encountered in South-east Asia and the Indian subcontinent. It is 25-27 cm long, and lives in tropical and subtropical humid forests eating mainly fruits.

The postage stamps issue “Exotic pigeons will be available on Thursday, 14th Octomber 2021, in Romfilatelia’s shops network in Bucharest, Bacau, Brasov, Cluj-Napoca, Iasi and Timisoara and online on https://romfilatelia.ro/store/. 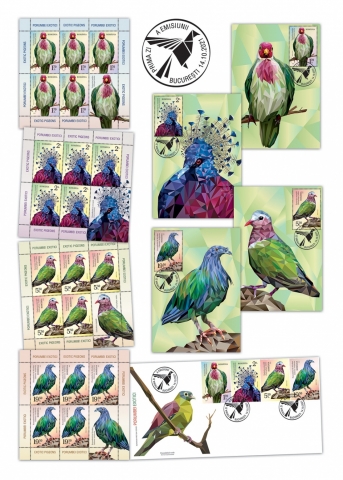 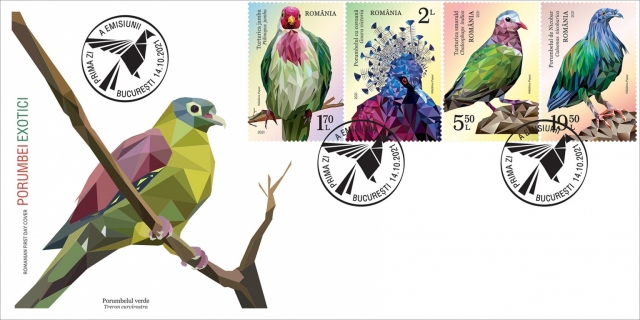 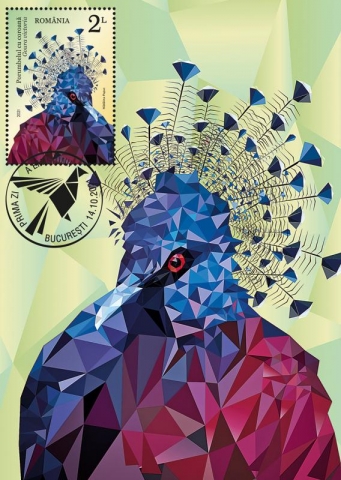 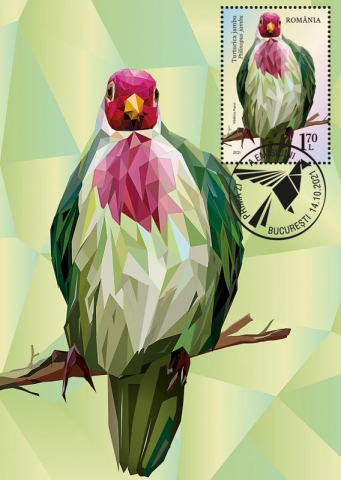 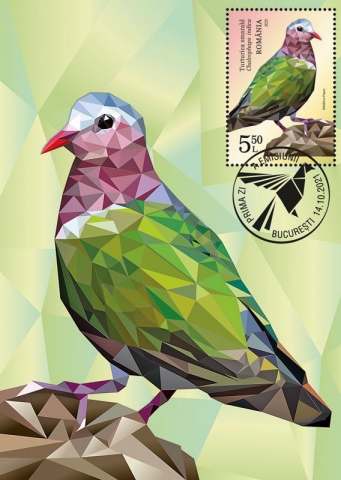 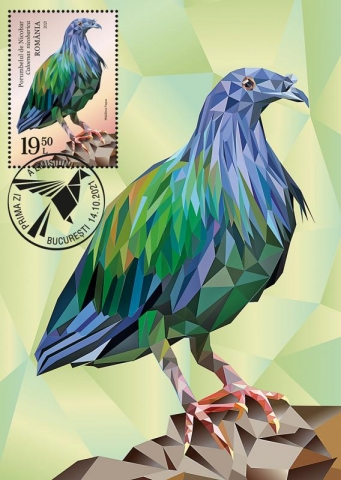 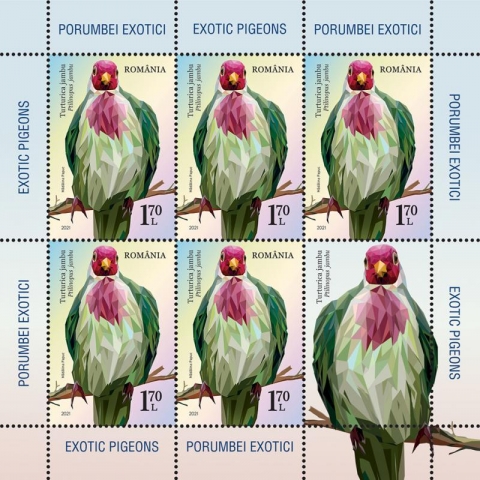 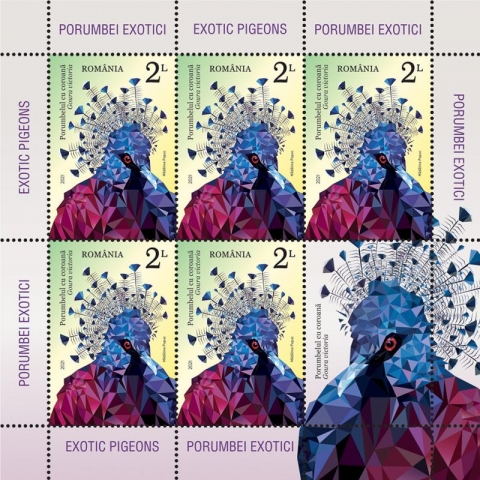 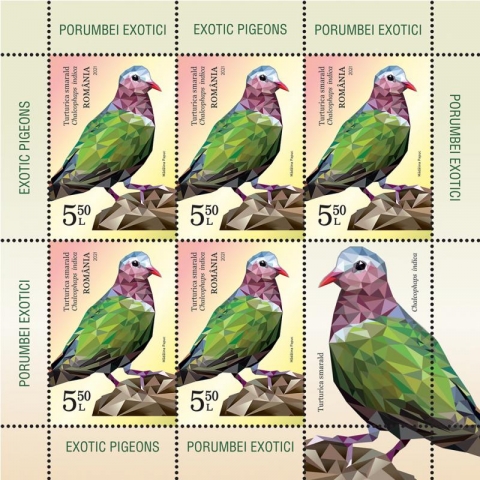 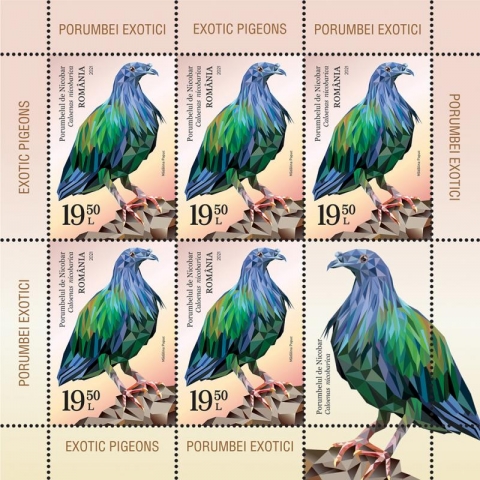 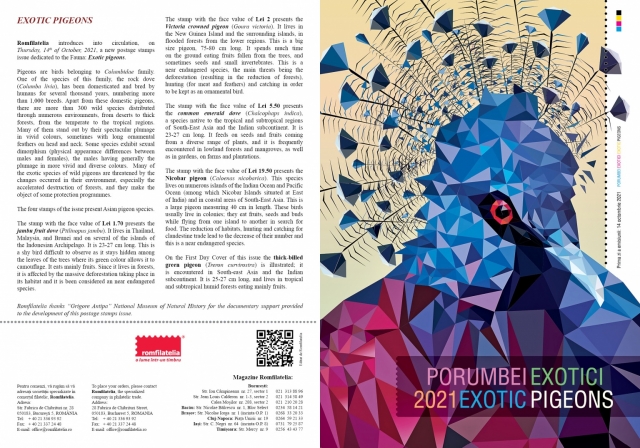 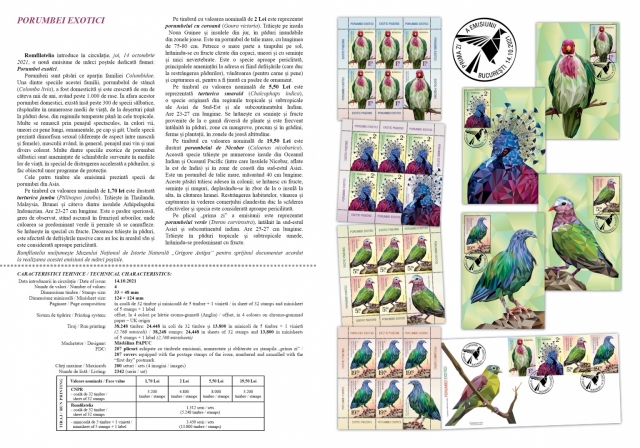 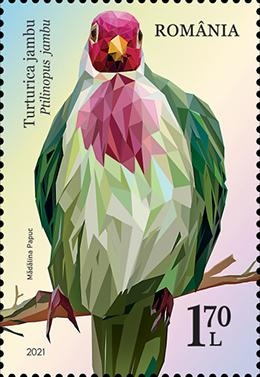 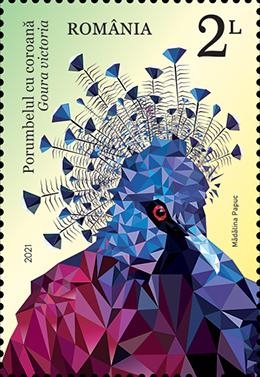 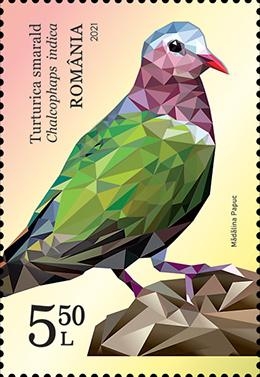 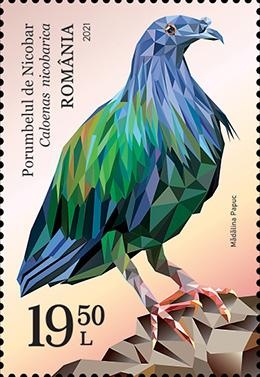