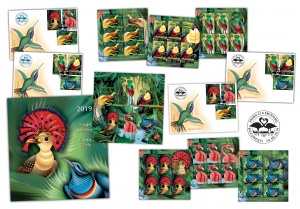 The Greater Bird-of-paradise – Paradisaea apoda is illustrated on the postage stamp with the face value of Lei 1.40.

Measuring approximately 33cm, it is one of the most beautiful birds in the world and despite its shiny appearance it is hard to detect in a wooded terrain. An original feature of these birds is the highly modified ornamental feathers. Their shrill call, which sounds like an echo in the forest is the element that betrays their position. They lower themselves on the branches of the crown voicing their call, in quick succession, around one call per second. They nest in trees, with nests shaped like cups. The laying of the eggs generally results in two eggs of varied colouring.

Resplendent Quetzal – Pharomachrus mocinno, represented on the postage stamp with the face value of Lei 1.60, is part of the Trogonidae family and can be admired in areas of North and South America where it populates the forested areas at altitudes between 1200 m and 3000 m altitude. The name “Quetzal” originates from the Aztec word “quezalli” which translates to “beautiful” or “precious”, this also being the reason that it has become an endangered species. Considered one of the most spectacular birds in the world, the Quetzal inhabits the south of Mexico and Panama, easily recognizable due to its colourful plumage.

Northern Royal Flycatcher – Onychorhynchus mexicanus, depicted on the postage stamp with the face value of Lei 3.10, is part of the Tityridae family of birds. It measures approximately 18 cm and is

easily recognizable by its distinctive crest feathers which are rarely exhibited outside the mating period. Its head and wings are brown with grey plumage on the sides of the head. Its neck plumage is white with its chest plumage of a grey colour, its ventral area is yellowish, and the tail is the colour of cinnamon with a dark tip. The spectacular aspect of this bird is its crest which lies folded on its head being semi-circular when unfolded and presents a distinctive red colour with blue markings. It can be found in South-East of Mexico, North-West Peru, Bolivia, Venezuela and South-East Brazil. Its natural habitat comprises of subtropical or wet subtropical wooded environments.

The American Flamingo – Phoenicopterus ruber, whose image is reproduced on the postage stamp with the face value of Lei 5, is a gregarious freshwater and saline habitat bird that belongs to the Phoenicopteridae family. Its distinct colour is a result of its omnivorous diet, consisting predominantly of algae and small critters. Their method of eating is also special and unique as the flamingos move their head under water, making use of its long neck which permits the filtration of large quantities of water while swinging its unusual beak side-to-side. Because of their feeding habits, they are vulnerable to changes in habitat, such as pollution in the areas they inhabit. They inhabit the Caribbean Islands, Mexico, the northern coast of South America and the Galapagos Islands.

The magnificent riflebird − Ptiloris magnificus, illustrated on the last postage stamp of the series, with the face value of Lei 19, is a member of the Paradisaeidae from the Passeriformes order, being easily recognisable due to the colouring of its plumage. They are spread in the area of New Guinea and Queensland, Australia, preferring forested areas, usually those at a higher altitude. Their nourishment comes from fruits and invertebrates.

Beautiful Hummingbird – Calothorax pulcher, depicted on the two First Day Covers of the issue, is part of the Trochilidae family, a large family comprising of over 400 species spread all over the New World alone. From Alaska until the Tierra del Fuego, from the ocean coast to the eternal snow of the mountains, mostly concentrated in the tropical climate of South America. Known as one of the smallest birds on earth, the Beautiful Hummingbird measures on average 5cm.

Romfilatelia thanks the “Grigore Antipa” National Museum of Natural History from Bucharest for the documentary support given to this postage stamps issue..

The postage stamps issue EXOTIC BIRDSwill be available on Wednesday, August 14th  2019, in Romfilatelia’s shops network in Bucharest, Bacau, Brasov, Cluj-Napoca, Iasi and Timisoara and online on https://romfilatelia.ro/store/. The postage stamps issue is completed by 2 “first day” covers,  as page composition in sheet of 32 stamps with tête-bêche, minisheet of 5 stamps, 1 label and block of 6 imperforated stamps.. 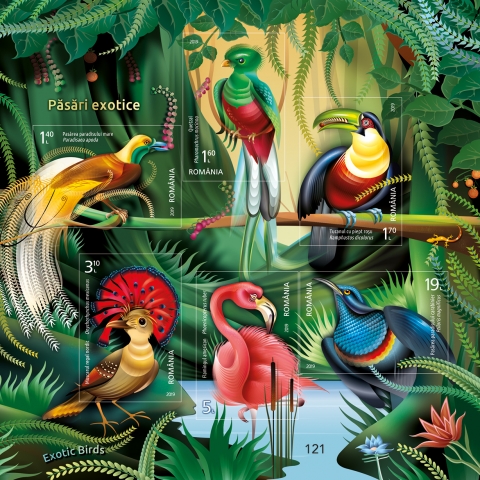 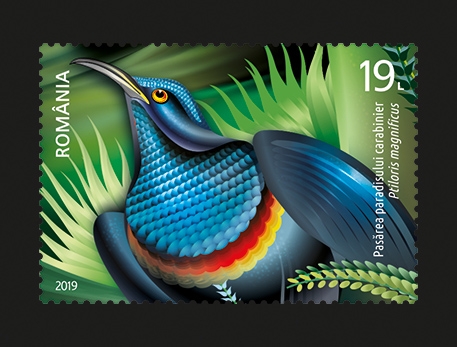 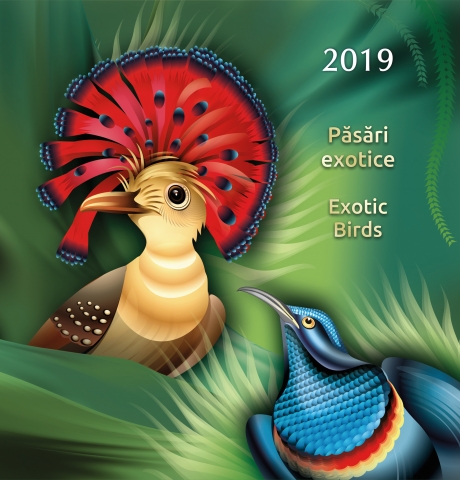 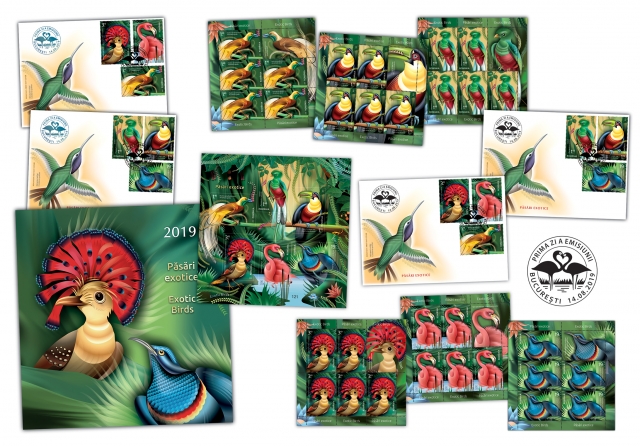 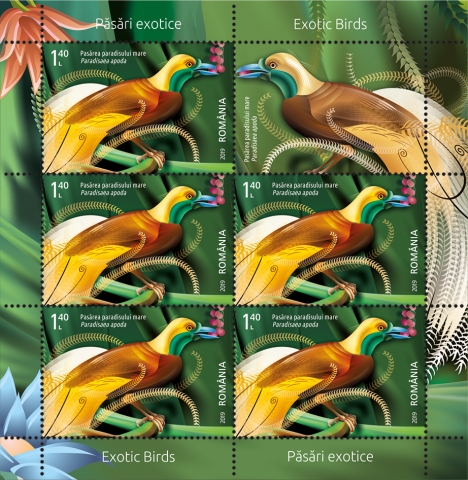 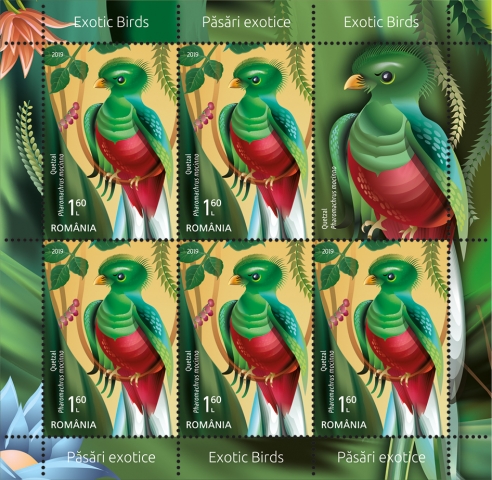 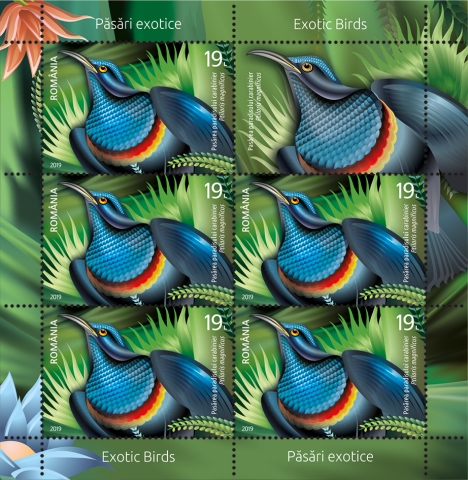 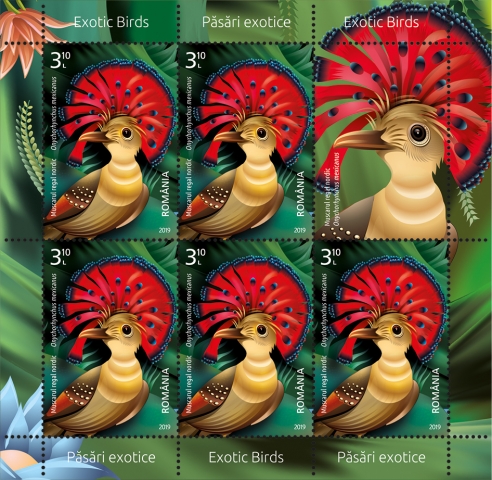 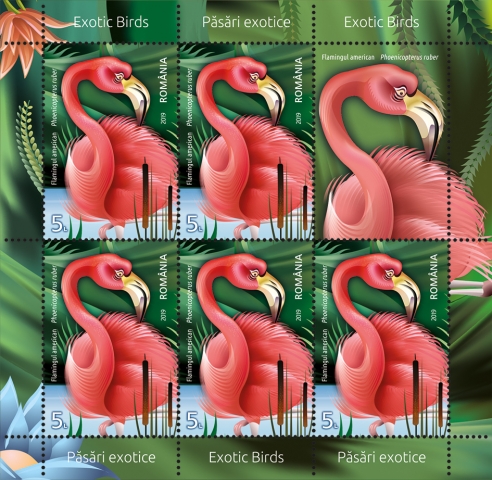 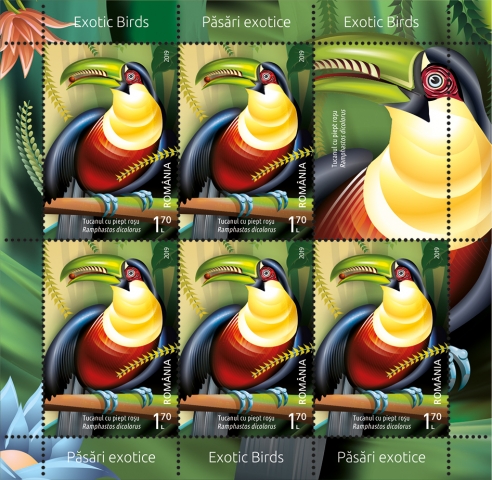 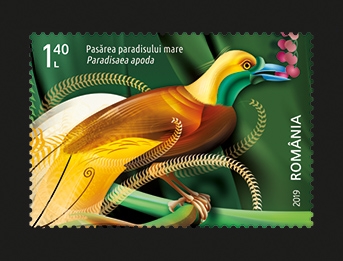 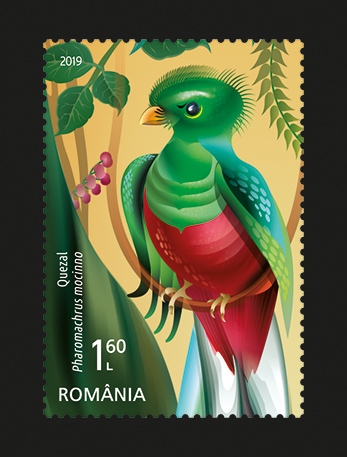 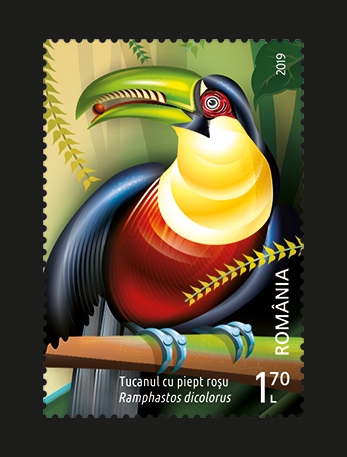 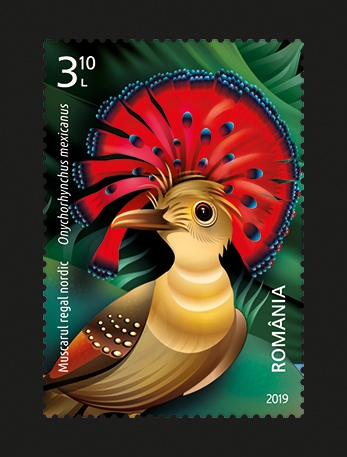 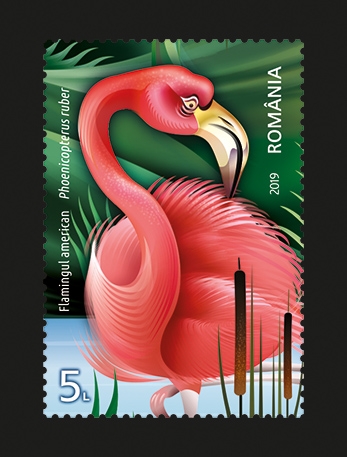 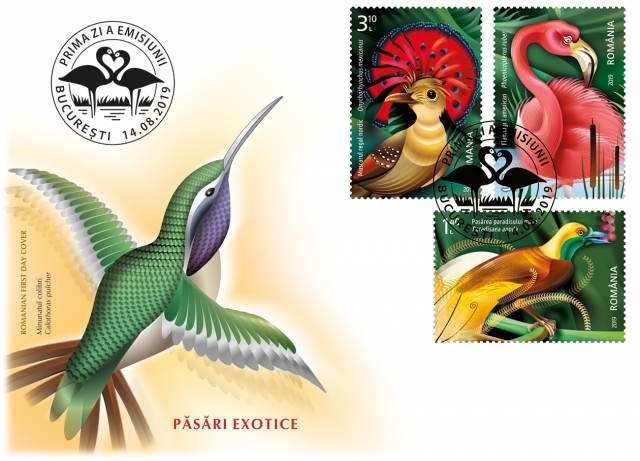 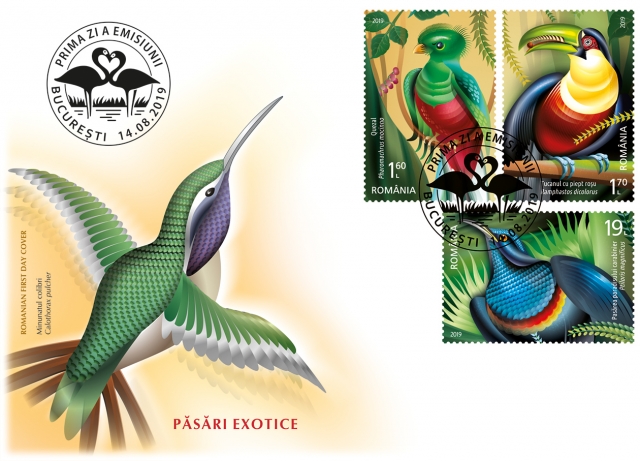 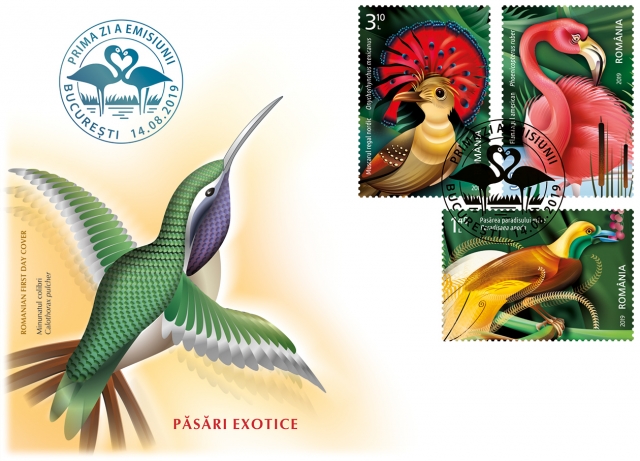 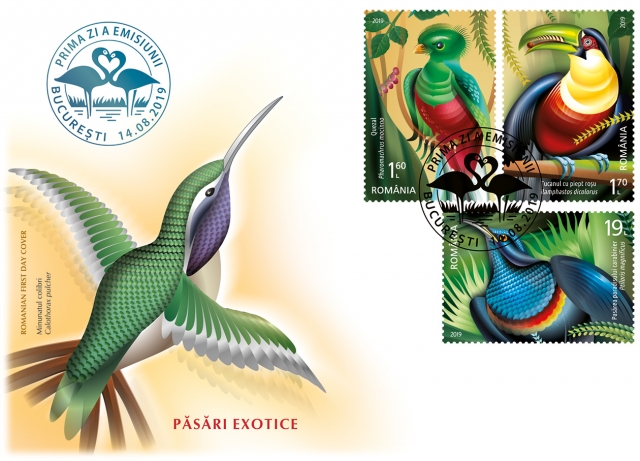