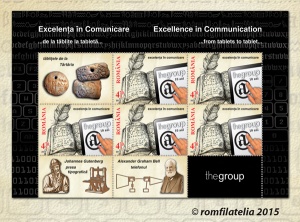 The history of communication is as old as human history. The oldest historical sources show that writing originates from the period between 6000 and 3200 BC. Among these, there are the famous Tartaria Tablets, considered by many researchers as the oldest artefacts that bear writing in the world. The other candidates to the title of the worlds oldest writing, namely the Egyptian writing, the Harappa and the Sumerian writing, date back to 3500-3200 BC. The Tartaria tablets would be older by a millennium to the Sumerian writing.
An important moment in the recent evolution of communication was marked down by Johannes Gutenberg and his creation of a new type of printing press together with oil-based inks. He introduced the printing concept, which allowed the efficient mass production of books.
The last century embraced one of the most enhanced phases in the revolution of communication and informatics. The advent of radio, television, Internet, mobile telephony has radically changed our social ecosystem. Thus the cyber universe extended and transformed our existence into a virtual one.
In Romania, excellence in communication was transformed into an art and is highly professionalised by The Group, a company whose goal, over the last decade, has been the constant innovation in the field of intelligent communication.
The postage stamp issue Excellence in communication. From tablets to tablet dedicated to the 10-year anniversary of The Group, pays tribute to the performance, vision, and professional innovation constantly offered by the founders towards the evolution of an entire field in the social sciences.
During the ten years since its establishment, The Group has contributed to the success of hundreds of brands, has designed and implemented complex advertising campaigns, developed sophisticated public relations programmes, printed the stories of outstanding brands, created and produced savoury commercials, managed substantial investments in mass-media, assisted ingenious marketing projects and most important, it engaged in many innovations in the marketing-communication industry in Romania.
The postage stamp of the issue with the face value of lei 4.70, sends the message of the communication evolution over time, in a world transformed by the rapid flow of information and new technologies of data transmission. The desire to convey ideas and information over millennia through writing marked the first information revolution. This and the following revolutions would shape humanity more than any crusade, war or ruler in history.
The stamp image tells us that over time, we have witnessed a shift from the offline to the online environment, the two framework aspects of communication being depicted simultaneously: on one hand, we have a graphic representation of a parchment with a quill; on the other hand, we see a tablet with a sliding index moved by the touch motion. Invented around 2700 BC, the parchment claims its name from the city of Pergamon, which was a prosperous centre for parchment production during the Hellenistic period. Introduced around 700 BC, the quill was the writing instrument that dominated for the longest period in history (more than a thousand years). Conceptualized in the middle of the 20th century and developed in the last two decades, the first modern tablet was launched in 2010.
Digital tablets are one of the most popular accessories of technologies, a symbol of the way in which technology can generate an attachment beyond geography, can compress the world in a screen which fits in the palms of a child, and allows for brisk access to information and knowledge in nanoseconds.
The margin of the minisheet depicts the portrait of Johannes Gutenberg together with his printing press, the figure of Alexander Graham Bell with his invention, the telephone, as well as the Tartaria Tablets (5500-5300 BC), which were discovered by the Cluj born archaeologist Nicolae Vlassa in 1961, in the town of Tartaria, Alba county. The tablets belong to the National Museum of Transylvanian History, and their images are symbolic for the evolution of communication.
A stamp ennobles by itself the communication between people, supporting its fulfilment. A stamp accompanies moods and shares emotions, builds bridges and reduces distances; it invites collectors to gather serious stories in concerns with a playful fragrance and files kept with the secret passion of recording history; the stamp overcomes time, indicating notable landmarks, and gives symbolic value to those it pays tribute to.

Romfilatelia thanks the National Museum of Transylvanian History for the support granted in the achievement of this postage stamp issue. 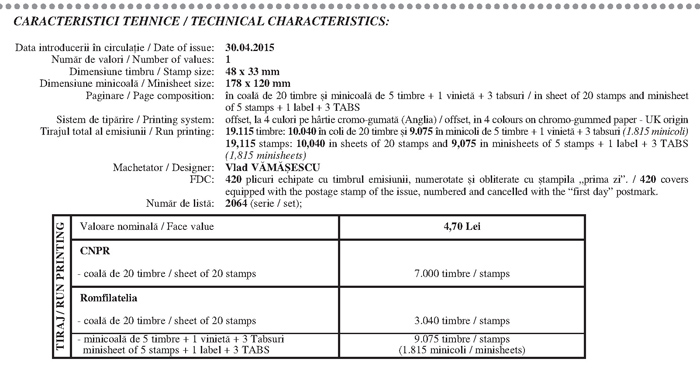