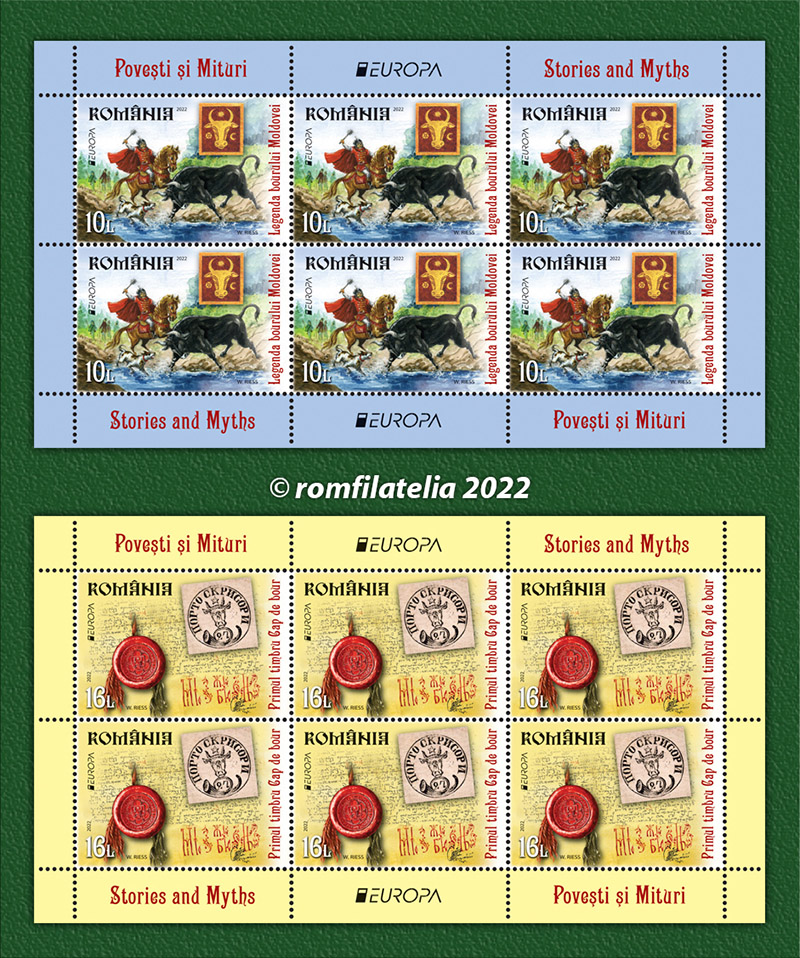 This year, under the title Europa 2022, PostEurop, the body of the Universal Postal Union, a specialized agency of the United Nations, chose the topic “Stories and Myths”.

In the northern part of the incomparable Transylvania there is a land of a special beauty: Voivodal Maramures. There, the sky rests on the high towers of wooden churches, to the construction of which unsurpassed craftsmen did not use even an iron nail.

There, the clear springs leap their water over the stone thresholds, humming a mysterious music, taken from the strings of the violins and in the hoot of the alphorns. The people of Maramures, called moroseni, proud, with a pure soul, are the descendants of those who gave the name of the land, the voivodes who made true and lasting history.

In the Land of Maramures there were, in the 14th century, seven principalities (territories under the jurisdiction of a ruler, called a knyaz, or prince). One of the most important principalities was the one from Cuhea, also known as belonging to the Bogdanesti family. It was located on the Viseu River Valley and on the upper course of the Iza River. In Cuhea was the centre of government and administration, the residence of the voivodal family from which Bogdan I, the founder of Moldavia, was originating.

The principalities had emerged as organized forms of Romanian resistance against Hungarian expansion. The local princes (knyaz), in turn, had elected a voivode of all Romanians in Maramures (Voyvoda Olachorum de Maramurisio).

In this dignity was, in 1343, the legendary Dragos, a pilgrim at the head of an army placed in the service of King Louis of Anjou of Hungary.

A descendant of Carol Robert, Louis continued the policy of expansion, which, at that time, presupposed the stringent removal of the danger of the Tatar invasion from the borders of the kingdom, also accepting as a solution the help of the Romanian voivodes (considered vassals).

In such a situation, accompanied by a cohort of cavalry, voivode Dragos advanced on one of the narrow roads of the secular forests of Bukovina, to the eastern lands, where the vast plains were taken over by the Tartar hordes.

Somewhere, in front of the army, the companion dogs, led by a beautiful specimen of the breed, the female dog Molda, belonging to the voivode, had begun to show signs of impatience, as if urging them to hurry.

After a while, the road began to widen, stopping in a beautiful meadow that bordered the banks of a clear and fast river.

Across the river, an unexpected image unfolded to the soldiers: a big, fierce aurochs staring from under the broad branch of a tree at the dogs, who, standing in a line by the river, were barking angrily, not having the courage to try the cold of the water. Hitting the ground hard with his front legs, the aurochs moved toward the noisy animals. Gushing from the shore alignment, Molda jumped into the river, quickly reaching the opposite bank. The aurochs, a little astonished, slowed down a little, but resumed his walking vigorously when Molda clearly showed the start of the attack. Pulling out furrows of grass, the blow with the horns threw the dog’s body upwards, and the aurochs, as if by a well-thought calculation, found itself immediately on the spot where the dog was about to fall, applying a new blow, this time deadly. Blood rushed to the voivode’s cheeks, and before the soldiers could move, he rode his horse, rushing furiously at the fierce animal. Arriving near the aurochs, the horse turned to the right, avoiding a direct collision. The soldiers had drawn their bows but were afraid to release the arrows for fear of injuring the voivode.

Dragos had hurried away by a short detour and had pulled out his heavy mace with steel fangs. The horse, strongly reined in, headed back towards the aurochs, which, with its head down, almost touching the grass, was moving menacingly towards the rider. For a moment he looked up at the man who had broken his territory. With unusual force, the voivode’s mace was thrown directly at the animal’s forehead. The blood from the wounds was visible and the aurochs’ gait was interrupted in a slow knee. The soldiers, who had meanwhile crossed the river, while sitting in the saddle, threw their short spears at the fallen body, causing it dozens of injuries, through which the animal’s strength drained out with its life.

Reality or legend, the story continued with the burial of Molda and the baptism of the river with the name Molda.

The Tartar armies were defeated and the voivode Dragos would later return to Baia, his royal fortress, where he ordered that the face of the aurochs, which had been killed by him in circumstances
of great danger, to be sewn with gold thread on the princely flags. In the next seven years of his reign, Dragos, Sas (son of Dragos) and Balc (son of Sas) succeeded each other in the seat of little Moldavia. The locals, however, rebelled against the sovereignty imposed by the king of Hungary.

In 1359, supported by Moldavians eager for independence, the voivode Bogdan arrived in Baia. Sas got chased away, and Bogdan became the leader of Greater Moldavia (by adding to Dragos’s Little Moldavia all political parties on the territory of Moldavia).

Exactly 500 years later, in 1859, Greater Moldova would add another country, Muntenia (Wallachia), under the sceptre of a single ruler, Alexandru Ioan Cuza.

The flags of Bogdan I continued to bear the image of the aurochs head, taken over in time by the sculptors who adorned the royal churches with ornaments. Louis of Anjou recognized, after a few lost battles, the exit of Moldavia from under the Crown of Saint Stephen through the Royal Diploma (February 2nd, 1365).

Almost a century after the enthronement of Bogdan I, on the flags of Moldavia carried by the brave soldiers of Stephen the Great, shone from the fabric of golden threads, the coat of arms of the country having as its central image the Aurochs Head.

History added new documents, arriving in a time in the capital of Moldavia, Iasi in 1858. There and then, in July, the first postage stamps were printed, whose drawing reproduced, next to the post horn, the Bull Head, with a five-pointed star between the horns. The drawing, whose author had never seen an aurochs (this animal had disappeared in the seventeenth century), vaguely reproduces the true image of the wild aurochs, but accustomed to the coat of arms of their country, Moldavians did not respond critically to the lack of veracity of the image.

The appearance of the postage stamp was a surprise for the inhabitants of Moldavia and for the officials of the Post Office, so another inconsistency was overlooked: the inscription of the stamp with the words PORTO SCRISORI instead of FRANCO SCRISORI. (PORTO is the fee paid upon receipt of correspondence, unlike FRANCO, which refers to prepayment, on posting). 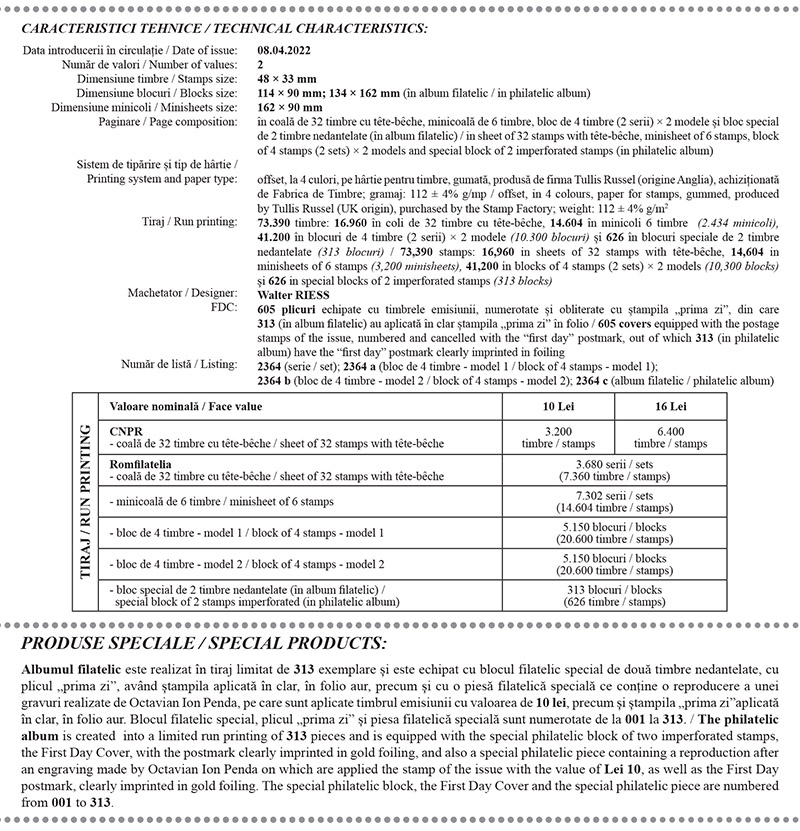