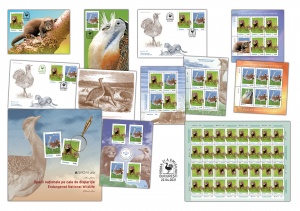 Animal lovers have the opportunity to get acquainted with two species that very few Romanians had the chance to see: the European mink and the great bustard.

This year, under the title Europe 2021, PostEurop, a body of the Universal Postal Union, a specialized agency of the United Nations, has chosen a topical issue, in the context of the need to protect endangered European fauna: Endangered National Wildlife.

Romfilatelia introduces into circulation, on Thursday, April 22nd, 2021, a postage stamps issue with this name, an issue consisting of two stamps on which two especially interesting and endangered species of the Romanian fauna are illustrated: the European mink (Mustela lutreola) and the great bustard (Otis tarda).

The mink is a medium-sized mammal (30-40 cm long), which lives near water, in swampy areas or near rivers, spending a lot of time in the water, looking for food.

Once widespread throughout Europe, the mink has today become one of the rarest and most endangered mammals on our continent. On the IUCN Red List (International Union for Conservation of Nature), the mink has the status of a critically endangered species – meaning it is only one step away from being declared extinct in the wild.

One of the causes is the destruction of the habitats of this species, through the drainage of wetlands and water pollution. In Central and Western Europe, a major problem was the introduction of a foreign species, the American mink, which competed with the European mink for food resources and spread diseases that also infected European minks. A direct cause of the decline was hunting, the thick and fine fur of the mink being highly priced.

One of the areas where there is still a large population is the Danube Delta Biosphere Reserve (DDBR). Romania is carrying out an extensive conservation project, co-financed by the European Regional Development Fund: “Ensuring a favourable conservation status for rescuing from extinction the European mink population – Mustela lutreola (species of community interest, critically endangered) – from Romania”. The project is implemented by the Danube Delta Biosphere Reserve Administration in partnership with the Danube Delta National Research and Development.

The great bustard (Otis tarda) is the largest bird species in Europe in weight: adult males can weigh more than 15 kg. Females are much smaller, weighing 4-5 kg. It is a plain bird; it lives in steppe meadows, but also on cultivated land. The range of this species extends from Western Europe (Spain and Portugal) to Central and Eastern Asia.

The great bustard was once widespread in the plains of Romania, but the spread of human civilization has profoundly affected this species: the vast desert meadows, where birds lived quietly, have been transformed into arable land, ploughed, irrigated, sprayed with pesticides, crossed by people and agricultural machinery; high voltage lines have appeared, which can lead to the death of many specimens, because the great bustards, despite their size, can fly at high speed. To these were added hunting and poaching, the great bustard being considered not only a tasty game, but also a trophy. The great bustard is a very vigilant and timorous bird, making it difficult to shoot, but people have found ingenious solutions to get closer to the right distance for shooting. The peasants hid, for example, behind silhouettes of cows, made of cardboard or wood. Another method was to hunt from the cart: the hunter was hiding under the mats, thus being able to approach the bustards, who were not afraid of carts and horses. Eventually, hunting and habitat destruction led, in our country, to such a drastic decrease in numbers, so that in the 1990s the great bustard was considered extinct in Romania.

In recent years, several specimens have been observed in the west of the country and in Baragan, which were thought to belong to populations in the neighbouring countries. It was a surprise to discover, in 2020, a nest with great bustard eggs on an agricultural land in Salonta, Bihor County. Ornithologists from the Milvus Group Association, one of the most active NGOs in Romania in the field of bird and nature protection, said that the nest photo “has a historical significance”. Specialists from the Milvus Group hypothesized that the great bustards would have kept at Salonta “one last centre of resistance” and that there would be a small cross-border population of 40-50 specimens, occupying a territory located on either side of the border with Hungary.

Therefore, the great bustard also lives in Romania, but it remains a vulnerable species and only through strict protection measures can we hope to see this magnificent bird populating the Romanian plains again.

A Natura 2000 protected area has been designated near Salonta, which bears the name of Cefa Fishery – Radvani Forest, where a suitable habitat for great bustards can be maintained, and a package of measures has been implemented within the National Rural Development Programme, which provides compensatory payments for farmers who manage their lands using agricultural methods to protect the bustards.

Romfilatelia thanks “Grigore Antipa” National Museum of Natural History for the documentary support offered to the development of this postage stamps issue.

The philatelic album is created  into a limited run printing of 361 copies and is equipped with the special philatelic block of four imperforated stamps and a label with a circular perforation, the First Day Cover, having the stamp clearly imprinted in green foiling, and also a reproduction of a vintage engraving.

The special philatelic block, the First Day Cover and the reproduced engraving are numbered from 001 to 361.

The postage stamps issue will be available on Thursday, April 22nd, 2021, in Romfilatelia’s shops network in Bucharest, Bacau, Brasov, Cluj-Napoca, Iasi and Timisoara and online on https://romfilatelia.ro/store/. 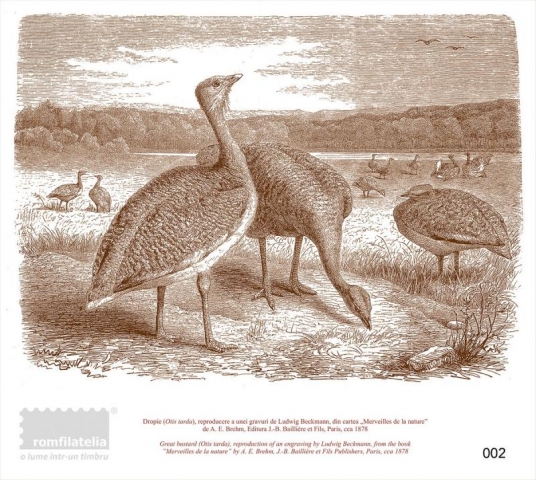 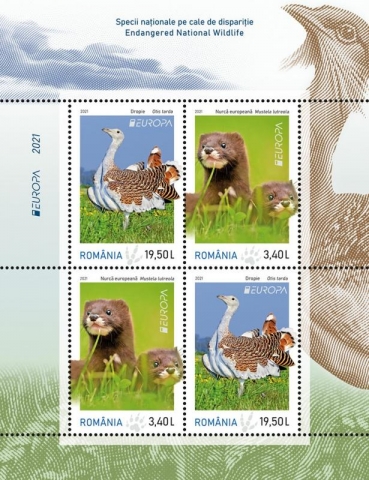 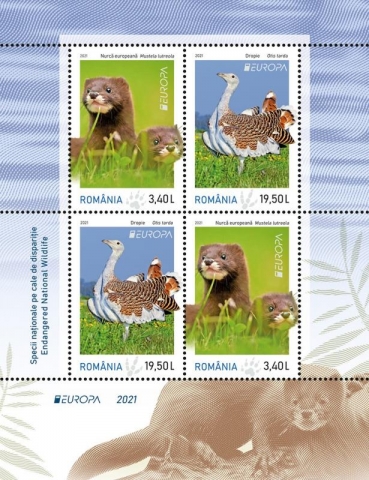 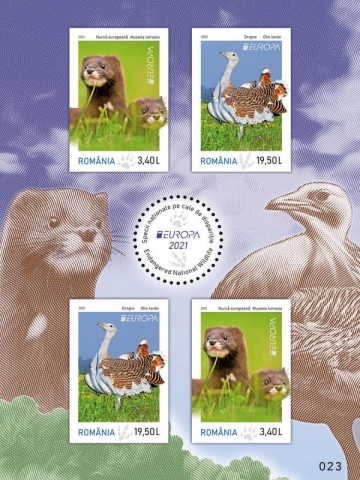 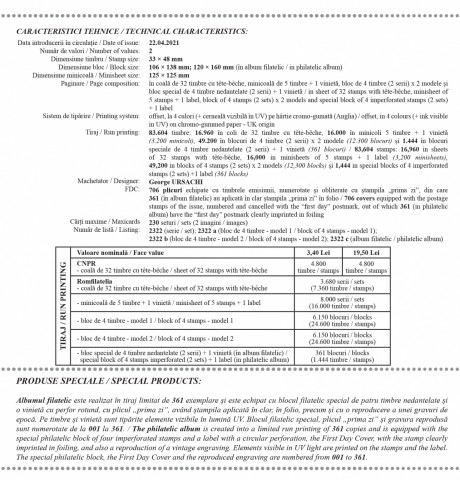 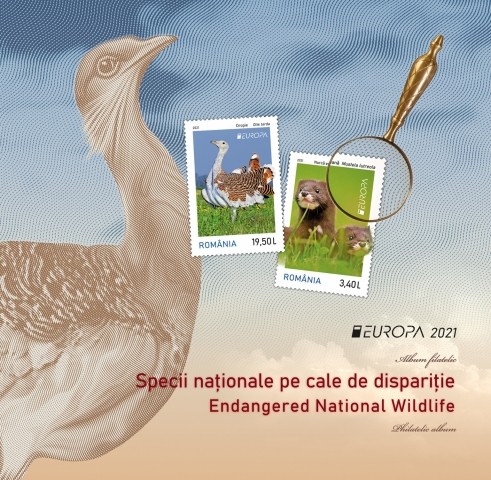 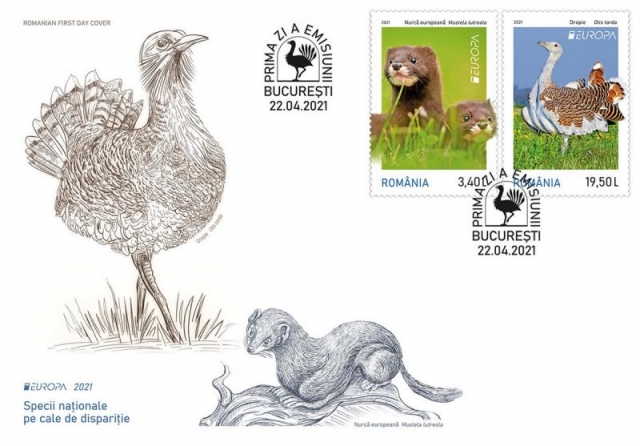 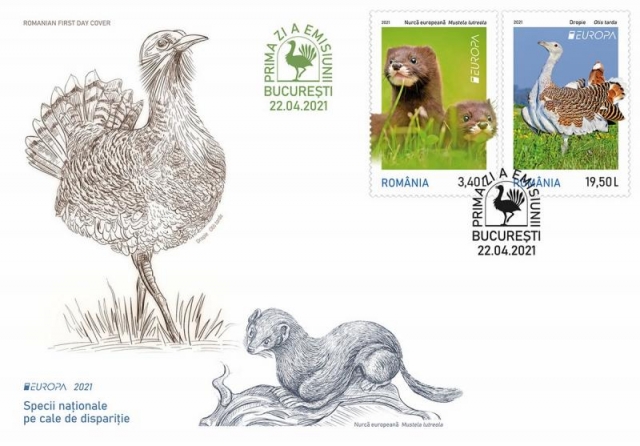 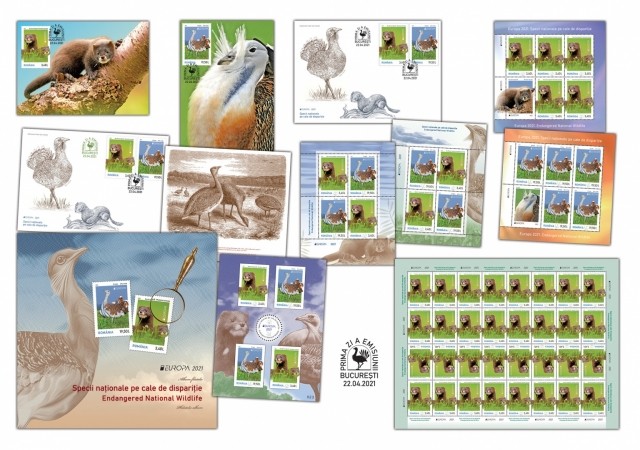 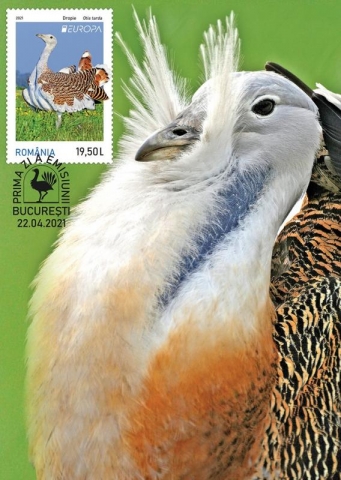 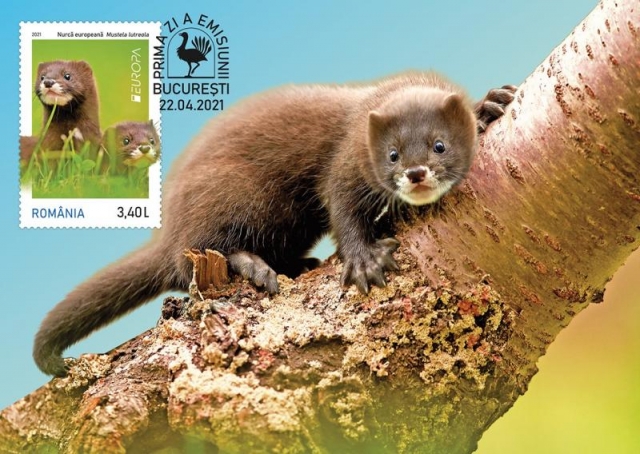 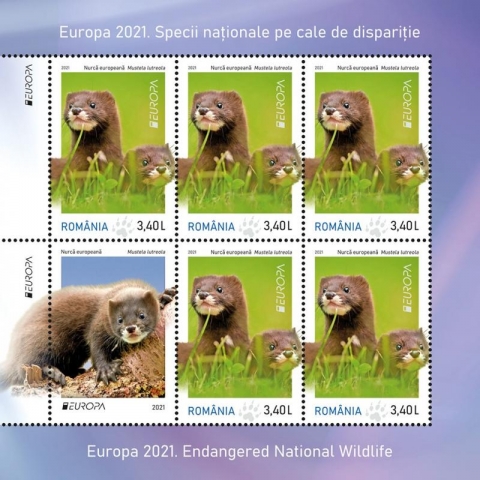 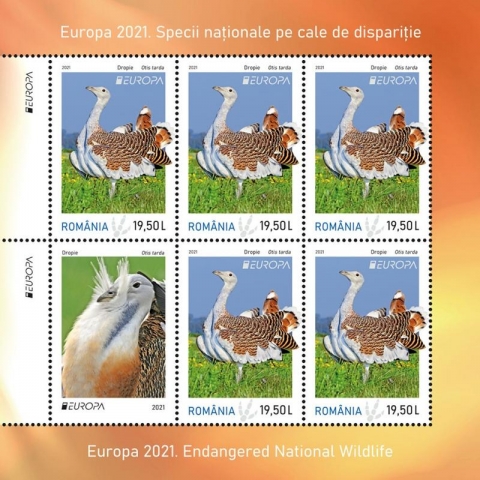 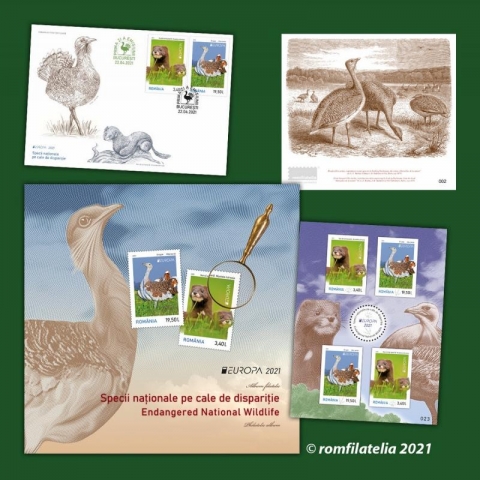 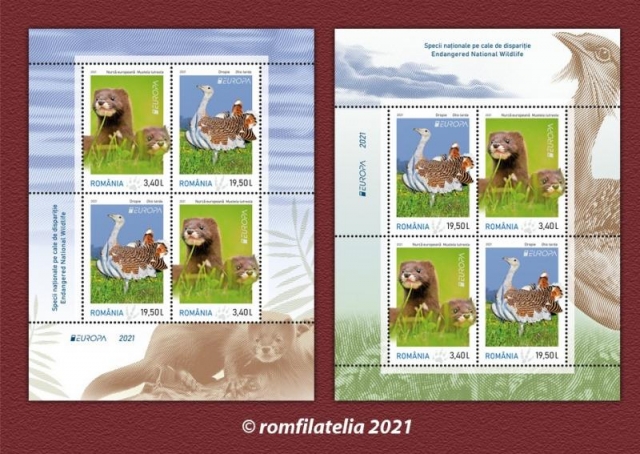 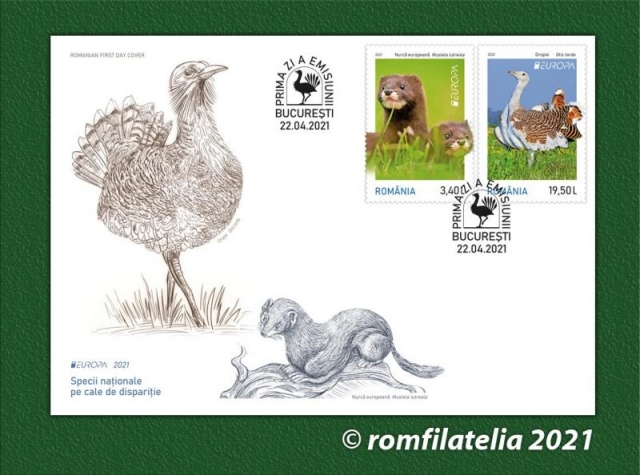 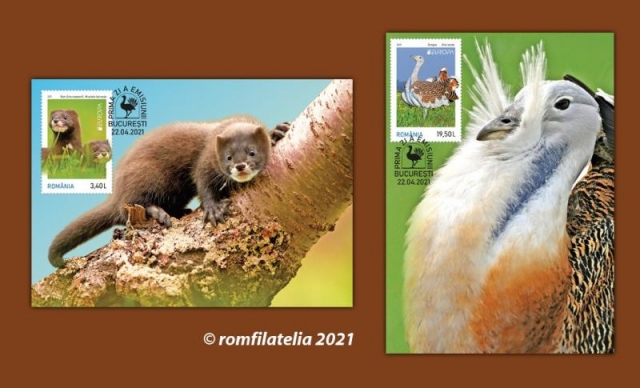 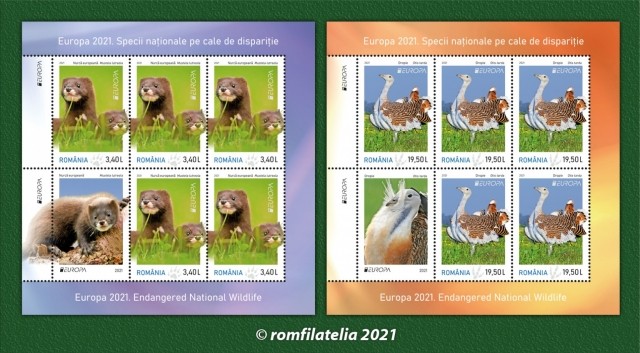 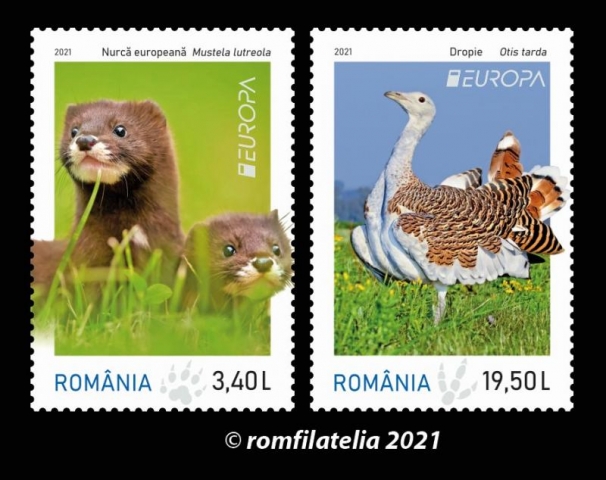 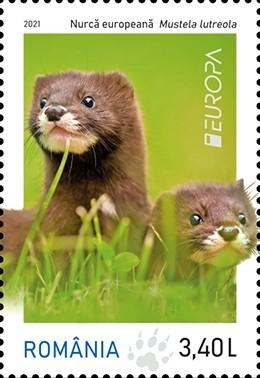 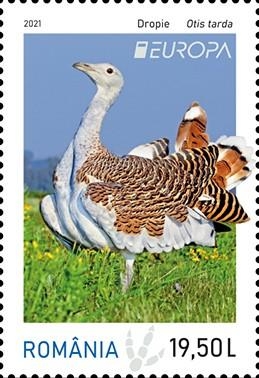