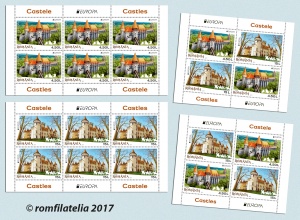 Built many centuries before, former properties and residences of rulers, built by old noble families, the castles of Romania have a glamour which, together with the beauty of the surroundings, weaves itself spectacularly with history.

The legends kept within their walls, together with their architectural and surrounding beauty, turn these destinations into the ones for which Romania is well known.

In 2017, Romfilatelia launches the postage stamp issue Castles, a theme selected for this year by the PostEurop, an organism of the Universal Postal Union, specialized agency of the United Nations.

The postage stamp issue is completed by a special philatelic product, which portrays the two castles in all their splendour.

The Hunyadi Castle, pictured on the stamp with the face value of Lei 4.50 is one of the most important monuments of Gothic architecture in Romania. It impresses with its presence through its various architectural styles, and legends woven around it.

An imposing building, with towers and bastions, the castle was built by John Hunyadi in the 15th century, on the site of an old fortification.

The building has experienced significant transformations during his time, serving as a fortified strategic point and as feudal residence. The Hunyadi Castle is one of the most beautiful and well preserved medieval buildings, being the most important property of John Hunyadi.

The first attestation of the castle dates from the year 1443 and appears in a document signed by John Hunyadi himself, which was kept to this day.

After the fire of 1854, the restoration works of the castle began in 1868 under the leadership of Hungarian architect Ferenc Schulcz, who respected the principles of restoration, set by French architect Eugčne Viollet-le-Duc.

The most significant parts of the construction, the Capistrano Tower (named after a famous Franciscan monk, John of Capistrano), the suspended gallery and Neboisa Tower were unchanged from the architectural point of view, since the time of John Hunyadi.

Because over time the Hunyadi Castle had several owners who have tried to put their mark on the architectural style, it has retained its originality and remained an enlightening example of military architecture in the south-eastern Europe of the 15th century.

The Károlyi Castle, illustrated on the stamp with the face value of Lei 15, a wonderful architectural jewel, is the first residence of the Károlyi family in Carei. The Károlyi family castle bears the marks of its function as a fortress, in the larger system of fortifications designed to stop Turkish attacks.

Due to the Turkish invasions, the residence was transformed into a fortress with strong walls on all four sides, with four corner bastions, each of them with gun ports and an exterior moat.

The Turkish attacks did not succeed to destroy the citadel, but caused great damage and the repair works began in 1660.

Once the military conflicts in the area ceased, Antal Károlyi (1732 – 1791) sketched out the first plans to turn the building into a full residence, but the actual works began in 1792. The main elements of the fortress, the bastions, are demolished and the fortress is transformed into a Baroque inspired castle which gained over the years an eclectic style, with original architectural elements.

Between 1894 and 1896, at the initiative of István Károlyi (1845 – 1907), the Károlyi castle goes through a new process of transformation, following the plans of the German architect Arthur Meining.

This time, the Baroque castle takes on the look of a medieval knight’s castle.

The three façades of the castle combine architectural and decor elements of several styles, Romantic, Baroque; the eastern façade is dominated by the Neo-Gothic style.

Both castles presented, so steeped in history and legend, silent witnesses of some many battles and intrigue, were declared museums and opened to the wider audience to be discovered in detail and to be placed in higher honour in the treasury of Romanian tourism.

Romfilatelia thanks for the management of the Károlyi Castle in Carei and Huniazilor Castle in Hunedoara for their documentary support granted in the creation of this postage stamp issue. 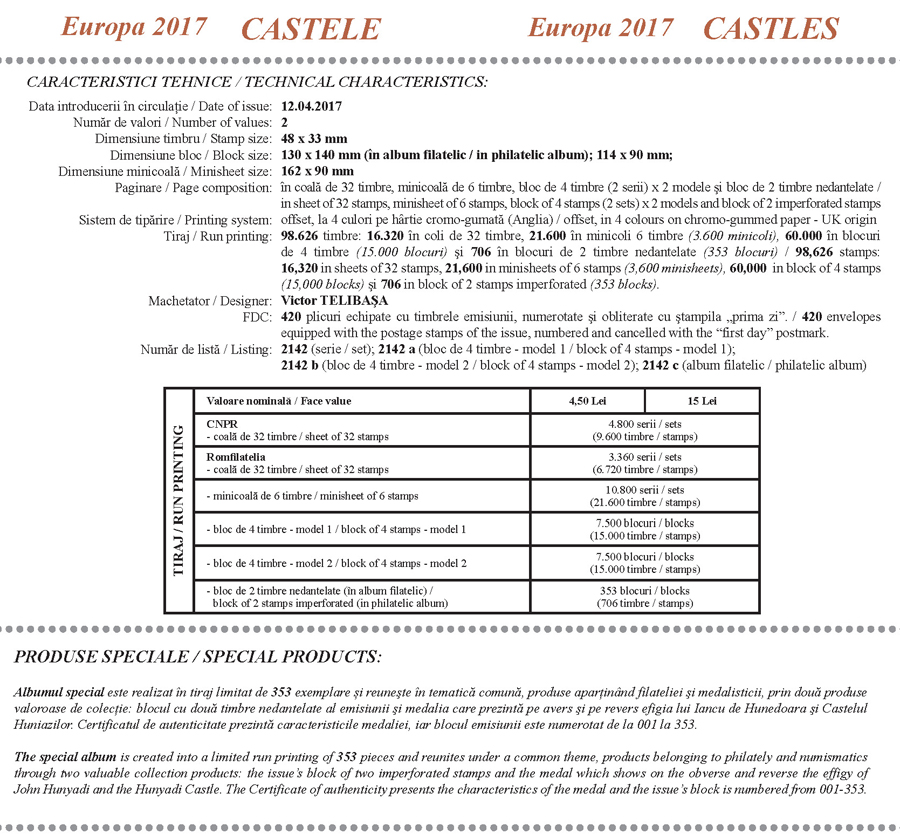