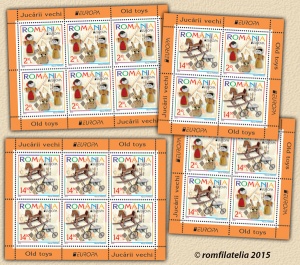 Childhood is the heart of all ages. Lucian Blaga.

The postage stamp issue Europa 2015, Old Toys continues the annual series of Europa philatelic issues, this year being devoted to vintage toys. The topic of each Europa issue is selected annually by the PostEurop body of the Universal Postal Union, each country having the opportunity to interpret the theme in its unique style.
Each toy has a story of its own, each has witnessed an emotion, a tear or a dream come true. Some were hidden in Santa Claus bag or Father Frosts, while others sat quietly in shined boots in the hallway. Some were bought with the last penny shaken out of the wallet, others stood radiant in shop windows or on cold market stalls, some have heard, perhaps, the merry music of fairs, but all, absolutely all our toys have seen a smile.
Toys have their well-defined role as a source of entertainment, as well as education. Generally, they are objects designed to render scale miniatures of reality and give children a representation of the adult world.
Anthropologists believe that the first toys invented by people were made of wood, clay and stone, materials that could be easily found in the environment, the list increasing to include: leaves, twigs, cloth, wool, corn cobs, bone, feathers, cork, wax, ivory, raffia, palm leaves, bamboo cane, paper etc.
Children of ancient Egyptians played with dolls carved in stone, which also had wigs. In ancient Greece and Rome, children played with dolls of wax and terracotta. Among the toys of ancient India, found by archaeologists, were miniature carts and bird-shaped whistles.
It is clear that the history of toys is as old as the history of humanity. They stimulate the childs creativity, intelligence and perspicacity, to prepare him for the adult life. Toys can be a bridge for the relationships between children, and even moral support for them.
One of the simplest toys, the wooden blocks set, is also one of the best for the development of the mind. Toys, like a ball or jump rope, teach children about spatial relations with other objects, the relation of cause-effect or action-reaction.
The toy craft art is wide spread in Romania as well, each region imprinting its specific elements on its toys. Boys would play with the hoop, with willow flutes or violins made from corncobs, with wooden horses, as well as guns made of elder wood, with balls of hemp as bullets, with spinning tops made of old spindles, while the girls would play with rag dolls.
Romfilatelia is pleased to introduce into circulation the postage stamp issue consisting of two values, which illustrates old, traditional, Romanian toys, thus inviting to a journey through time into the world of childhood.
The stamp with the face value of lei 2.10 illustrates three traditional toys painted on wood. Toys were commonly found in traditional fairs organized during celebrations in towns and villages. They are based on much older models, versions of these models reaching close to our time.
The stamp with the face value of lei 14.50 takes us back in time, reminding us of the age of innocence, of the wooden horse and tricycle, the silent witnesses of the most audacious adventures of childhood. They accompanied the little ones on the long expeditions meant to discover the world, carrying them and their questions, queries and joys onwards. The wooden horse could be found in various forms in almost all the countrys regions. Balancing on this toy was one of the priceless sensations of a child, 100-150 years ago. The tricycle, unlike the horse, offered real mobility to the child, who learned to pedal and drive his small vehicle. The tricycle pictured on the stamp dates from the 50s and 60s and is based on an inter-war model.
All toys depicted in this postage stamp issue belong to the Toy Museum Association, which was created by a group of enthusiastic toy lovers and keepers of their own toys. During the four decades the collection came to include many toys belonging to different generations. Thusly the best friends from childhood do not age. Although not as handsome as in their youth, no longer playing or doing lessons, they keep their place in the adults heart.

Romfilatelia thanks the Toy Museum Association from Bucharest for the documentary support granted in the achievement of this postage stamp issue. 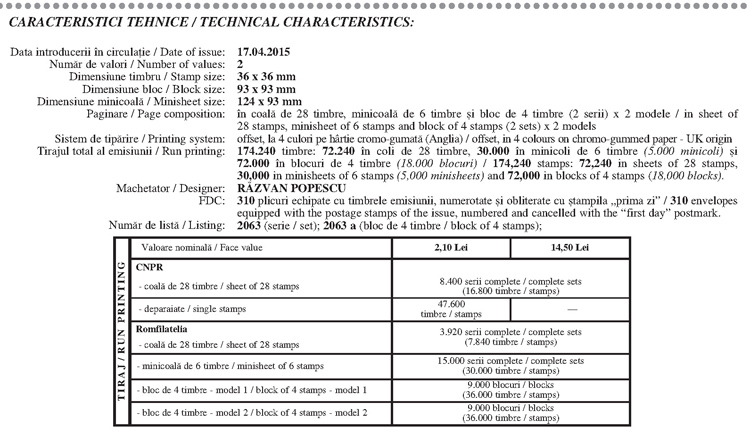