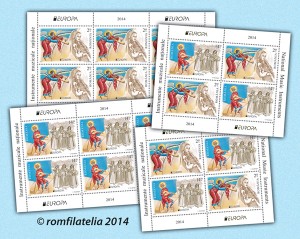 “Whether tormented by longing, or overwhelmed with joy, Romanians sing their sorrows and joys, praise their heroes and history, thus their souls being an endless spring of beautiful poetry.” (Vasile Alecsandri)

The designer conceived this topic as an artistic illustration shaped around the main idea of the intertwining between religion and secularism.

The issue illustrates images of musical instruments that can be found in the iconography of Orthodox churches in Moldavia, as well as pictures of traditional music instruments such as: the lute, the cobza, the fiddle, the flute, the tulnic.

On the postage stamp with the face value of lei 2.10 is illustrated the “tulnic”, an old music instrument specific to The Stone Land (Tara Motilor). It is considered an integral part of the Romanian people’s cultural legacy.

The tulnic is a tubular shaped instrument, open at both ends, similar to the alphorn and having a slight curvature at one end, that produces sounds by blowing air into it; it is produced from the tree bark of the Linden Tree or Willow, and is used for long distance signalling and communication.

The lute is the musical instrument depicted on the postage stamp with the face value of lei 14.50.

This is a plucked strings folk instrument alike the cobza. It is almond shaped, slightly flattened, having a curved back, a neck without bars, and a face resonance orifice on its face; the head is tilted backwards.

With Persian-Arabic roots, the lute knew a flourishing period and became very popular during the Renaissance and Baroque periods, when it was one of the most common and widely used music instruments. Its popularity was also due to the fact that most of the music scores were using tabs (alphabetical or numerical notation), which were also accessible to those who didn’t know the musical notation.

A small folk group whose performers play the violin, flute and lute is illustrated on the same postage stamp.

The violin, an instrument frequently used by groups promoting traditional folk music, has the highest tone among string instruments. It’s a music instrument composed of a resonance box across which 4 strings are strung, that reverberate and produce sounds when excited with a bow, or when plucked.

Due to its clear, expressive and beautiful tone, the violin is the main tune carrying voice in the ensemble. Its brightness and warmth of sound places it at the lead of the orchestral instruments.

The Pan-flute has been known within the Romanian ethnic-cultural space since Antiquity, being an integral part of the Dacians’ existential universe. The flute is one of the few music instruments used since antiquity which is still present in the national musical culture. This instrument is made of a system of adjoining consecutive sized flutes, glued together in increasing order of length. The sounds are produced by blowing directly into tubes.

It bears the name of the mythological hero considered to have invented this instrument: Pan. Greek mythology presents him as the son of Hermes and god of the shepherds and flocks. Pan’s flute was made of seven reed pipes of different lengths put together. 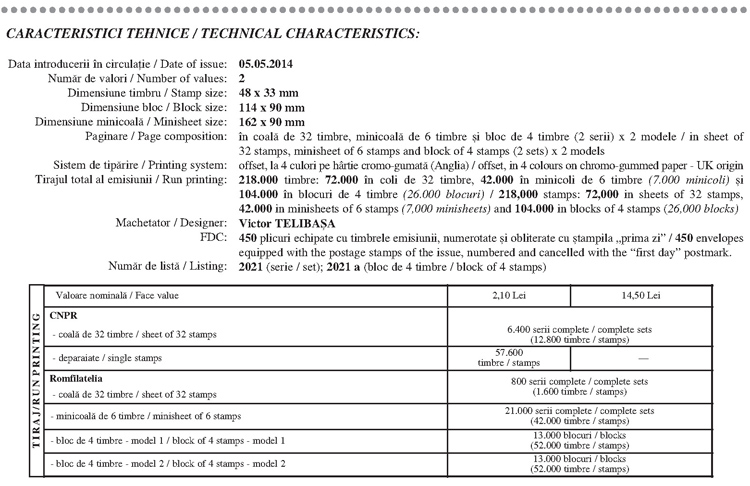