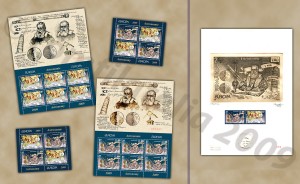 Engraved stamp – created  in a limited run printing of 350 copies by the renowned engraver artist Octavian Ion Penda, reproduces the  elements
of the stamp head of the issue with the face value of RON 2.40. Next to the engraving are attached the 2 postage stamps of the issue in original.
These  exclusive products are numbered in red from 001-350, bear the Romfilatelia´ s  embossed logo and are signed by the author.