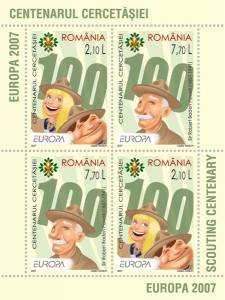 This issue marks a national and international event, extremely important for philatelists of all ages as well as for the public, due to the numerous means of illustrating this theme. The theme established by POSTEUROP, with the slogan EUROPA, is approached by each member country of this organization, taking into account its own specific. The postage stamps with this theme, issued by each country, shall compete in an international contest.

In 1857, Robert Baden Powell is born in London, the son of an Anglican theologian, member of the Royal Society from 1824 and of the daughter of Admiral Wiliam Smyth. After finishing school, Baden Powell chooses a military career. He leaves for India in 1876 where he wins the most craved trophy among British officers, the famous “Kadir Cup” (boars hunting with a long spear). In his regiment he attempts to reform the methods of military training, introducing fun activities for lifting the spirits of the troop. Between 1899 and 1900 is chief of the Mafeking garrison in South Africa. After a resounding success, due to the fact that he succeeded in defending the city during the war with the Boers, he is decorated by Queen Victoria, with the Bath Order  and advanced to the position of Major General. This promotion gloriously marks the end of his military career, Sir Robert Baden Powell dedicating his life to promoting peace and tolerance.
In 1907, between July 27th and August 8th, he sets up on the South coast of England (Brownsea Island), a camp for 20 youngsters in which he promoted through non-formal education the spirit of adventure, the team work and personal evolution.
This is the moment when the Scouting is born, a movement which shortly spreads across all the world’s regions.
In 1912 the first groups of Romanian scouts (Blaj, Brasov, Bucuresti) appeared and in 1914, thanks to their creative activity, the Association of Romanian Scouts is established.
In 1922 the Association becomes founding member of the World Organization of the Scouting Movement. In 1937, the year of its dissolution, its presence was everywhere it was required.
New-born in 1990, the National Organization “Scouts of Romania”, the largest non-government youth movement in Romania, becomes famous nationally and internationally.
In 1993, the National Organization “Scouts of Romania” is admitted in the World Organization of the Scout Movement once more which presently registers over 28,000,000 active members in 216 countries and territories. In Romania, over 2,500 members develop the activity in 65 subsidiaries.
In 2007, the year when 100 years of scouting are celebrated and 150 years from the birth of the founder of this movement, all over the world, manifestations with the motto 2007: A World, A Promise, will take place.

Romfilatelia thanks the National Organization “Scouts of Romania” for its collaboration. 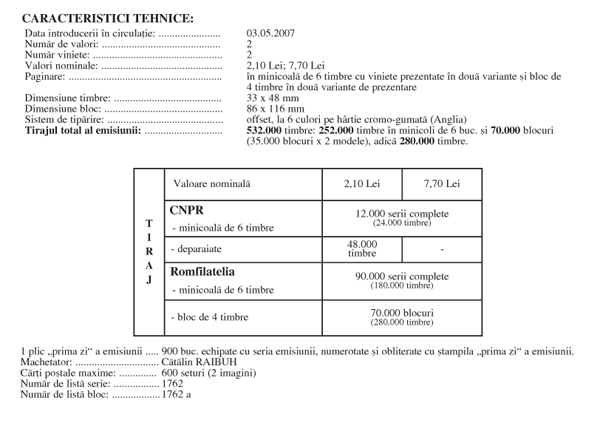