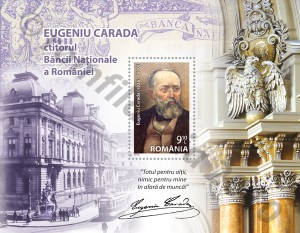 Eugeniu Carada was a complex and outstanding figure, a high profile politician and one of the founders of modern Romania who left an indelible mark on the Romanian society through his lifetime achievements.

Born on 29 November 1836 in the southern city of Craiova, Carada studied at the National College and, concurrently, at the French Institute in Craiova, whose curriculum was similar to that in the Sorbonne. Then, Carada left for Paris, where he attended lectures on Law, Literature and Economics at Collège de France.

Throughout the 1860s, Carada made his literary debut. His work included successful plays and vaudevilles, as well as poems exuding strong patriotism.

During 1856-1859, Carada participated in the dramatic events occurring against the background of the fight for the Unification of Romanian provinces of Wallachia and Moldavia in his capacity as a secretary of the Ad Hoc Assembly of Wallachia.

Several years after the Unification, disappointed with the slow pace of reforms by the Romanian ruler Alexandru Ioan Cuza, Carada joined Cuza´s opponents who took steps towards ousting from power and replacing him with a foreign ruler. Therefore, Carada accompanied his good friend Ion C. Bratianu, the leading figure of the Liberals, to Paris, to the Napoleon III´s court, in search for an appropriate successor to the throne of Romania.

After the designation of Carol I as Romania´s ruler, Carada and C.A. Rosetti drafted the country´s fundamental document, namely the Constitution of 1866, of Belgian inspiration. Carol I failed to implement the reforms envisaged by the Liberals in a bid to achieve a swift and radical development of the country, thereby paving the way for a pro-republican and anti-dynastic movement led by Carada. As the movement failed, Carada, C.A. Rosetti and I.C. Bratianu were arrested and then acquitted on all counts.

Over 1871-1881, Carada lived in Paris, where he took the necessary steps for publishing articles on the state of affairs in Romania, in line with the aim of gaining independence and seeking to secure a loan for the endowment of the army. Carada was also involved in the printing of the first Romanian banknotes, i.e. mortgage notes, at the Banque de France.

After the Law on the establishment of the National Bank of Romania (NBR) was promulgated on 17 April 1880, Carada was appointed first as a government representative in Paris and thereafter as an NBR representative overseeing the manufacturing of the paper for printing the Romanian banknotes. He opted for cobalt blue, a colour used in printing French, Belgian and Italian banknotes. Carada also made preparations to purchase the equipment for the printing house of the NBR, so that Romanian banknotes could be produced in Bucharest.

The NBR´s operations required a head office suitable for such a leading institution, therefore in 1884 the construction works of the NBR Palace started, based on the blueprint designed by two French architects, Albert Galleron and Marie-Joseph Cassien Bernard, recommended by Carada, and locally overseen by the Romanian architect Nicolae Cerchez.

Since 1883 until he passed away in 1910, Carada was an NBR director in charge with the territorial organisation of the bank as well as the development and diversification of banking operations to the country´s best interest.

If nowadays the Romanian monetary and banking system enjoys prestige, this also owes to the great Eugeniu Carada who, according to the famous Romanian writer Liviu Rebreanu, “… started his life by writing lyrics, but ended it in the style of figures”.

The postage stamp of the souvenir sheet of the issue illustrates the portrait of Eugeniu Carada signed by Camil Ressu. The painting belongs to the patrimony of the National Museum of Art of Romania. 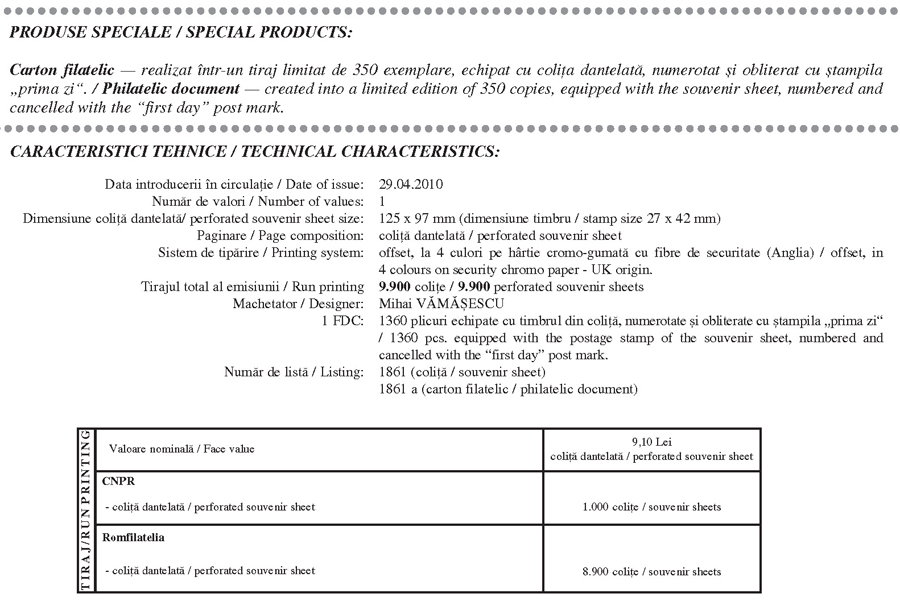