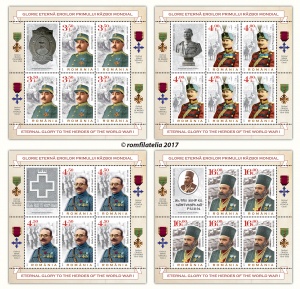 Romfilatelia introduces into circulation the postage stamp issue Eternal Glory to the World War I Heroes, dedicated to the soldiers who fought for the accomplishment of the Greater Romania’s ideal.

On the stamp with the face value of Lei 3.50, the portrait of General Ioan Dragalina is illustrated. Born at Caransebes, on December 16th, 1860, he graduated from the Military Academy in Vienna, but resigned from the Austro-Hungarian army in 1887, dissatisfied by the discrimination of the Romanian officers. He moved to Romania, and his training and rigor helped him to promote rapidly. He distinguished himself as head of the Military Infantry School in Bucharest, being rewarded with the Order of the Star of Romania. In 1915, he was promoted to the rank of General and in the summer of 1916 he fought with heroism for the liberation of Banat. He would have wanted to triumph in his native Caransebes, but he was transferred to the Jiu Gorge, in order to stop the German offensive. On October 12th, 1916, he was shot on the battlefield, and died from the wounds.

The portrait of General David Praporgescu illustrates the stamp with the face value of Lei 4.00. He was born on December 10th, 1865, at Turnu Magurele, initially preparing to become a school teacher. Later, he achieved military training in the country and in Western European schools, becoming one of the most valuable military cavalry officers. He was also an excellent professor at the School of Cavalry Officers in Bucharest, and at the Superior School of War. Prior to Romania’s entry into the global conflagration, he was promoted to the rank of General and received the mission to defend the Danube line, in Oltenia. In mid-September 1916, however, he moved to the southern front of Sibiu, the army needing his strategic thinking to stop the German counter-offensive. On September 30th, 1916, he died on the battlefield.

On the stamp with the face value of Lei 4.50, the portrait of General Radu R. Rosetti is illustrated. Born on March 20th, 1877, in Caiuti (Bacau County), he was the descendant of
an aristocratic family, with Genovese origins. In his childhood, he received high quality education, and joined the army at the recommendation of his parents, after completing the School of Bridges and Roads. He was quartered on the Moldavian front, but a wound from the fight of Marasesti brought him out of the battle. Later he acted on the line of military diplomacy. He joined the French army and was the liaison officer between the Romanian government and General Henri Mathias Berthelot. After the war, he became known as a writer and historian, being accepted in the Romanian Academy. Arrested by the communist regime, he died at Vacaresti Prison (June 2nd, 1949).

The portrait of priest Constantin Nazarie illustrates the stamp with the face value of Lei 16. He was born on March 16th, 1865, at Vultureni (Galati County), and attended different Moldavian theological schools, as well as the Kyiv Theological Academy. In 1898, he was appointed director of the Central Seminary in Bucharest, also distinguishing himself in publicistic activity in the field of theology. In May 1915, the Holy Synod of the Romanian Orthodox Church appointed him as Archpriest or Superior of the Army priests, with the rank of Colonel. During the war, he laid the foundations of the Army’s Religious Service, and managed to persuade the Officer Corps to accept the presence of priests in the theaters of operations. After the war, he continued his didactic activity at the Faculty of Theology in Bucharest. He died on March 21st, 1926. 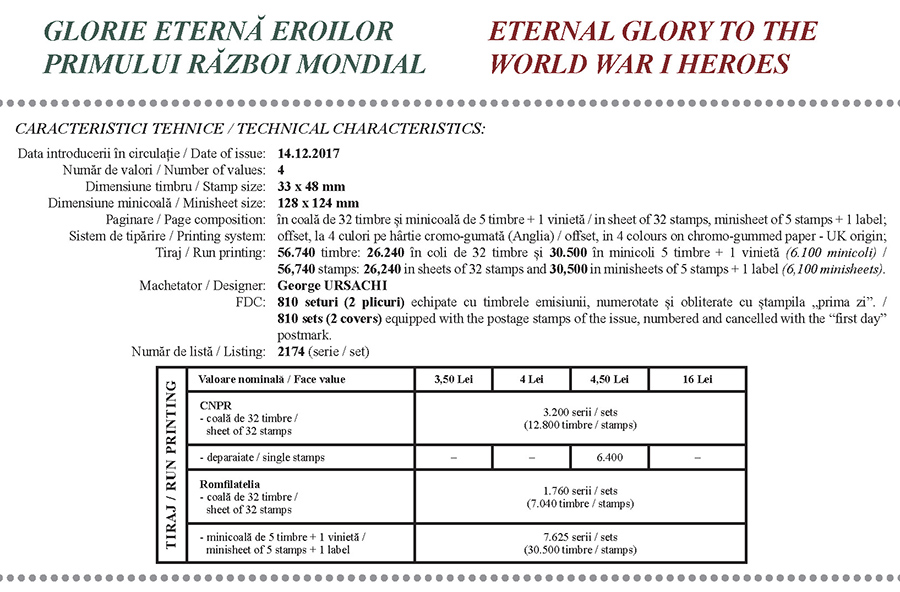