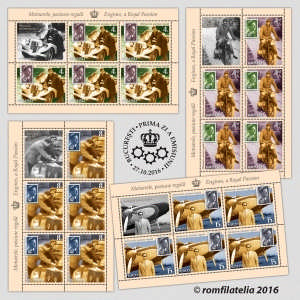 Over the years, cars, motorcycles and planes were for King Michael I both a hobby and a way to defend oneself from all pressures and tensions of life, a fact which Romfilatelia brings to the attention of a larger audience through the postage stamp issue “Engines, a Royal Passion”.

The first vehicle driven by His Majesty was in 1927 when at age 6 he received an electric car manufactured in England called Red Bug.

He received his first real car, a Morris produced in 1927, as a gift from Prince Nicholas, his uncle, at only eight years old. To learn driving the young Crown Prince would look carefully at the Royal Palace motorists to “steal” their craft, but had also a dedicated driver, who initiated him in the art of driving and some important issues of motor mechanics.

By the age of 15 he had driven exactly 44,415 kilometers, according to notes kept thoroughly throughout his lifetime.

Upon studying the list of cars (the King recorded every kilometer traveled by car or plane in special notebooks), it appears that in his youth, His Majesty had two or three cars at the same time, which he used in a weekly rotation, and which, after several years of driving, he would part with. One of these cars is the Aero 30 Roadster that the King received from President Beneš of Cehoslovakia in 1937, illustrated on the stamp with the face value of Lei 4.

The King never collected cars as trophies to exhibit in front of others. His cars were driven, cared for, repaired, seen as a triumph of human ingenuity and treated as a source of equilibrium.

In total, Kind Michael I, at the honourable age of 95 years has 38 cars to which are added the four American military jeeps, all original, some received as gifts, some personally restored by His Majesty.

One of the pleasures of staying in Savarsin was driving the jeep through the woods, a place of ease and harmony in the midst of the tumult of the Second World War. In the current collection of His Majesty, there are three jeeps registered for circulation.

In over 80 years of driving cars, the King has been behind the wheel for more than two million kilometers. With modesty, His Majesty said that “today, it would not mean much because people are driving more than 100,000 kilometers a year”.

Although his interest was concentrated on cars, His Majesty did not limit himself to these types of vehicles, driving motorcycles, such as the one illustrated on the stamp with the face value of Lei 4,50 and piloting airplanes.

His passion for driving and for cars was shared by Queen Anne, one of the moments the royal coupled shared being illustrated on the stamp with the face value of Lei 8.

King Michael I’s enthusiasm was also lavished on airplanes. The first flight as a passenger was between Bucharest and Ploiesti in 1934, when the King was 12 years old.

For a long time, the King was denied setting foot on a plane, this being regarded as an inadmissible way for the Crown Prince and later the King to risk his life.

But, with the help of pilot Traian Udrischi, the King learned to fly and remembers the first airplane that he single-handedly piloted, a Junkers JU 52, model of German manufacturing, “of an unladen weight of five tons that handled differently when people were on board”.

In Europe, the King piloted aircrafts especially on the route Baneasa – London and Baneasa – Rome. In the United States, he worked as a test pilot for Lockheed Aircraft, his visit to the company’s USA factory being illustrated on the stamp with the face value of Lei 15.

When he stopped keeping track of his flights, on August 31st, 1960, His Majesty had accumulated 955 hours and 55 minutes of flight, gained on 50 different planes, according to the notes that he himself took down on a special 120-page notebook comprising minutely every flight between 1934 and 1961.

On the royal Savarsin domain, the Royal Museum of the Automobile was opened on October 25th, 2011, on the occasion of His Majesty’s 90th anniversary, a museum hosting the current collection of royal cars, new and old, as well as a photo exhibition and documents relating to the Royal Family of Romania’s passion from 1866 until today. Romfilatelia thanks the Royal House of Romania for the documentary support granted in the creation of this postage stamp issue. 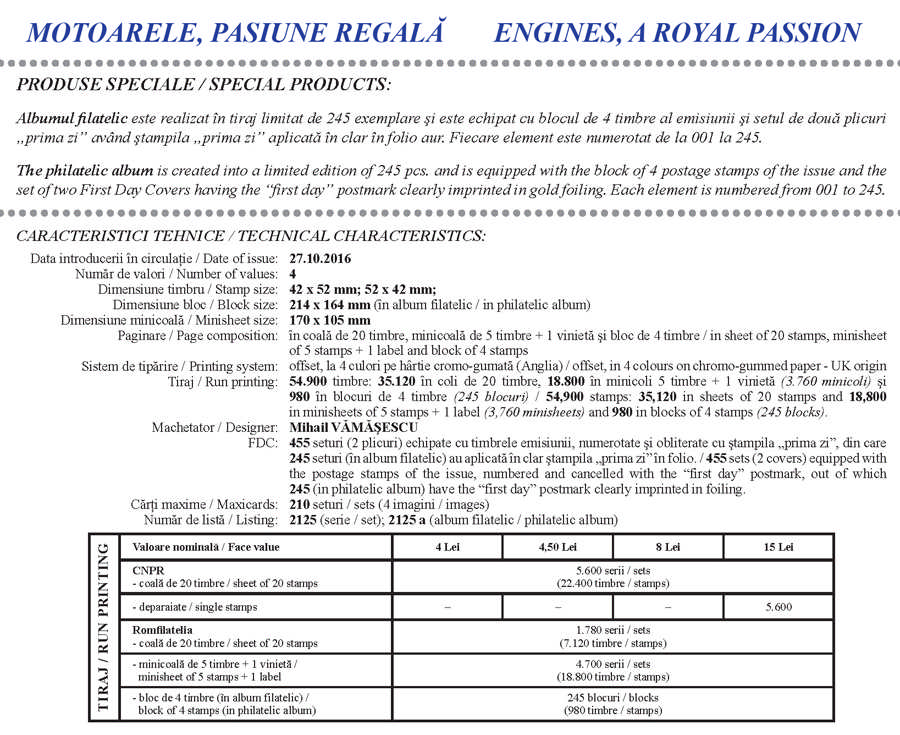