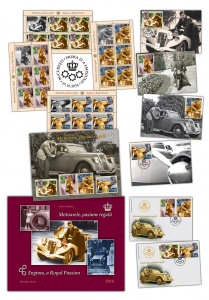 “I think I was born with the steering wheel in hand”. (King Michael I)

Engines – whether there were cars, motorcycles or airplanes – were for His Majesty, King Michael I, both a hobby and a way to cope with the tensions and pressures of everyday life, a passion that has emerged since childhood and has grown over the years.

Red Bug, the electric car manufactured in England received by His Majesty at age 6 or his first
real car, a Morris produced in 1927, received as a gift at age 8, were the “stars” which led to
His Majesty’s passion for horsepower.

In total, at the honourable age of 95 years, King Michael I has 38 cars to which are added
four American military jeeps, all original, some received as gifts, some personally restored by
His Majesty.
Sharing the vision of His Majesty, which is to see engines as a triumph of human ingenuity, Romfilatelia brings to the public’s attention the latest postage stamp issue, created on the topic of royal vehicles. Suggestively entitled Engines, a Royal Passion, the issue consists of four stamps and is available starting from Thursday, October 27th, 2016, in Romfilatelia stores in Bucharest, Bacau, Brasov, Cluj-Napoca, Iasi and Timisoara.

On the stamp with the face value of lei 4 is illustrated the Aero 30 Roadster car, received as gift from President Beneš of Czechoslovakia in 1937. This is one of the three cars used by His Majesty in his youth, in a weekly rotation, which after several years of driving he would part with.

King Michael I’s enthusiasm was also lavished on airplanes, his first flight as passenger being between Bucharest and Ploiesti, in 1934, when the King was 12 years old. Although the King was denied setting a foot on a plane for a long time, due to the risks brought by this means of transportation, the King learned to fly with the help of pilot Traian Udrischi, the first airplane that he single-handedly piloted being a Junkers JU 52, a model of German manufacturing.

In Europe, the King piloted aircrafts especially on the route Baneasa – London and Baneasa – Rome. In the United States, he worked as a test pilot for Lockheed Aircraft, his visit to the company’s USA factory being illustrated on the stamp with the face value of lei 15.

The four stamps are designed in sepia tones, sweetened with shades of green, purple and blue, thus reproducing a retro atmosphere of the interwar period.

The issue is completed by a set of two first day covers and a set of four maxicards, and as page composition were used the sheet of 20 stamps, the minisheet of 5 stamps + 1 label and the block of 4 stamps (in philatelic album).

The special product is the philatelic album, created into a limited edition of 245 pieces and equipped with the block of 4 postage stamps of the issue and the set of the two first day covers having the “first day” postmark clearly imprinted in foiling. Each element is numbered from 001 to 245.

Romfilatelia thanks the Royal House of Romania for the documentary support granted in the creation of this postage stamp issue.