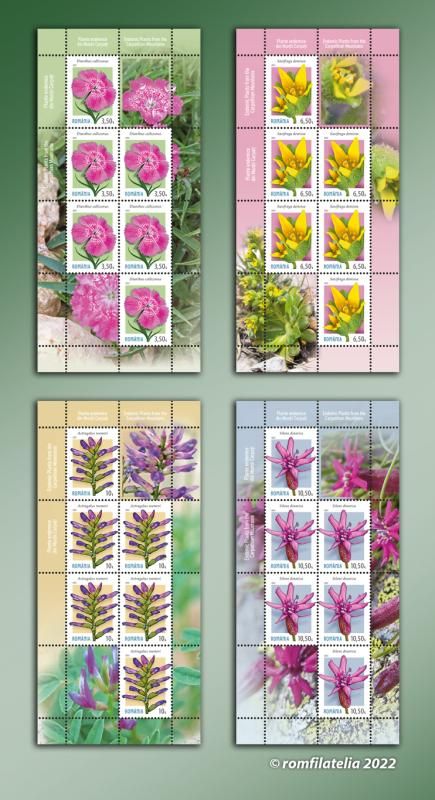 Romfilatelia introduces into circulation on Wednesday, 24th of August, this year, a new postage stamps issue with the Flora theme, having the subject Endemic Plants from the Carpathian Mountains.

Endemic plants, specific only to a geographical area, represent the essence of the authenticity of the natural component and the biological heritage that a region can have.

Within the issue comprised of four stamps, four minisheets and a First Day Cover, were chosen some of the most valuable biological heritage that Romania possesses, especially due to their rarity, all five species having a distribution limited only to limited mountain areas of the Eastern (Oriental) and Southern (Meridional) Carpathians or from the Apuseni Mountains, not existing anywhere else in the world.

Dianthus callizonus – Little Carnation of Piatra Craiului – depicted on the stamp with the face value of Lei 3.50, it belongs to the Caryophyllaceae family and represents a symbol of nature protection in Romania, being an emblematic perennial species for the Piatra Craiului National Park, the only mountainous massif in Romania (and in the world) where the plant is known. It was discovered and described in the middle of the 19th century on the grassy slopes and calcareous boulder fields of the Piatra Craiului massif. The herbaceous, unbranched stem, 10-20 cm long, with opposite leaves, most often ends in a single flower up to 3 cm in diameter of reddish-purple colour with a specific pattern at the base of the petal lamina (the central part of the flower). The species can be found in bloom in July especially on the steep slopes of the northern sector of Piatra Craiului in the subalpine floor (1,500-1,900 m altitude), being a strictly protected species in Romania.

Saxifraga demissa – Perennial species belonging to the Saxifragaceae family, is illustrated on the stamp with the face value of Lei 6.50. It is characterized by the presence of persistent, glabrous basal leaves of large coriaceous (leathery) consistency, forming rosettes of up to 15 cm in diameter. The stem up to 25 cm high and the inflorescence are covered with thick glandular hairs, and the yellow-sulphur flowers are arranged on the branches, forming a compound raceme. It is endemic to a limited area of the Romanian Carpathians and blooms in the months of July-August, being found only in the subalpine and alpine floor of the Bârsa mountains (Piatra Mare, Postăvaru, Piatra Craiului), in the Bucegi Mountains and in the Ciucaş Mountains, on conglomerate rocks or on calcareous substrate, between 1,500 and 2,400 m altitude.

Astragalus roemeri – Römer’s Cossacks – depicted on the stamp with the face value of Lei 10, it is a perennial herbaceous species belonging to the Fabaceae family, named in honour of the Transylvanian botanist Julius Römer. It was discovered for the first time at the end of the 19th century at the base of the calcareous rocks and on the calcareous gravels of Pietrele Roșii near Tulgheș (locus classicus). The plant forms dense bushes, 50-70 cm high, with stiff stems that remain in the bush from previous years, giving it a shrubby appearance. The leaves are pinnate-compound, and the lilac flowers, which bloom in the months of June-July, are collected in elongated raceme inflorescences and later form fruits (pods) that persist throughout the year. It is an endemic species for Romania, being distributed in the restricted mountain areas of the Eastern Carpathians (Bistriței, Ceahlău and Hășmaș Mountains) and Apuseni Mountains (Scărița-Belioara Nature Reserve of the Gilău-Muntele Mare Massif), mainly between 700-1,300 m above sea level.

Silene dinarica – represented on the stampt with the face value of Lei 10.50, it is a perennial herbaceous species of the Caryophyllaceae family, cespitous, forming short bushes up to 5-6 cm high with creeping flowery stalks and often solitary flowers on each branch. It blooms in the months of July-August and develops on acid rocks in the alpine floor of the Făgăraș Mountains, often in the cracks of the rocks. Published as a new species for science in 1816, it was later (1825) described by the German botanist K. Sprengel on the basis of the botanized material. However, following a most likely labelling confusion, the material was considered to be from the Dinaric Alps, leading to the assignment of the current name, with the erroneous geographical indication adjective (“dinarica”), despite the fact that the species is endemic to the Făgăraș Mountains (the central part of the Southern Carpathians), never found anywhere else in the world.

Rosa coziae – Cozia Rose – illustrated on the First Day Cover of the issue, it is a woody perennial species belonging to the Rosaceae family and a symbol of the Cozia National Park, it was first discovered and described in the mid-20th century by the botanist originating from Cluj, Erasmus Julius Nyárády. The species blooms from mid-May to June.

Romfilatelia thanks to PhD. Bogdan-Iuliu Hurdu, within the Institute of Biological Research in Cluj-Napoca, for the documentary and photographic support granted for the development of this postage stamps issue. 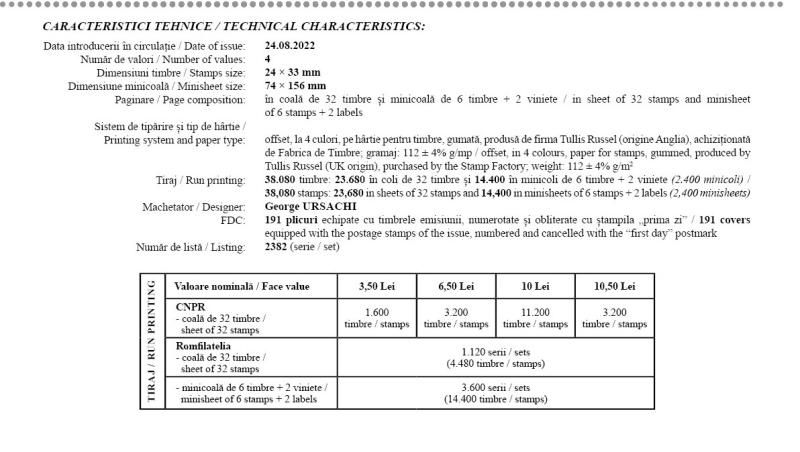