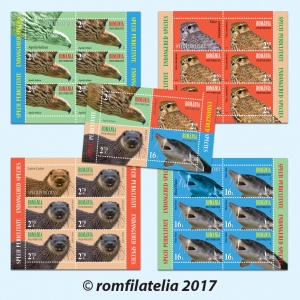 Because United Nations stamps reflect the specific and distinct views of the world Organization, which draw attention to significant world problems, Romania, a member state of the UN, is fully aligned with the organisation’s objectives through the postage stamps issued.

Human rights, the environment, endangered species and peace are all objectives of universal concern to the peoples of the world.

The four species presented are included in the CITES (the Convention on International Trade in Endangered Species of Wild Fauna and Flora) area of protection.

The Eastern Imperial Eagle (Aquila heliaca), illustrated on the stamp with the face value of Lei 2.20, is a large species of bird of prey that breeds from south-eastern Europe to western and central Asia. This species has a small global population, and is likely to be undergoing continuing declines, primarily as a result of habitat loss and degradation, adult mortality through collision with power lines, nest robbing and prey depletion. In Romania, these birds’ nests had disappeared for 50 years, only to reappear in 2016, in Arad county.

The Merlin (Falco columbarius), reproduced on the stamp with the face value of Lei 2.50, is the smallest species of falcon from Europe and Romania, with numerous subspecies throughout North America and Eurasia. Males typically have a wingspans of 53 – 58 centimetres, with females being slightly larger. They are swift fliers and skilled hunters who specialize in preying on small birds, from sparrows to quail. The use of certain pesticides between 1960s and 1970s caused some reproductive failure. With the banning of these pesticides their negative impact has fallen as indicated by breeding densities and distributions. In Romania, the Merlin  is our guest in winter and is an agile predator which  hunts small rodents and birds.

The Eurasian Otter (Lutra Lutra), illustrated on the stamp with the face value of Lei 2.70, lives in a wide variety of aquatic habitats, from lowlands to highlands.  It is a carnivorous mammal, semi-aquatic, feeding  mainly on fish, which make up a significant portion  of its food. Otters are usually more active at night, especially in habitats where they are disturbed by human activities, but in quieter areas they can be  observed during the day as well.

Overfishing at sea and poaching in estuaries and rivers for meat and caviar are a major threat to the Beluga (Huso Huso), presented on the stamp with the face value of Lei 16. Being a migratory species, it travels from the Black Sea, upriver on the Danube, seeking out deep spots with a hard riverbed, which is its reproductive habitat. In Romania, the beluga can be found in the Black Sea, but also in the navigable parts of the Danube, and exceptionally in the Razelm-Sinoe lagoon complex or the lower courses of large rivers. It feeds on other fish, crustaceans and mollusks.

Romfilatelia thanks the “Grigore Antipa” National Museum of Natural History, the Romanian Ornithological Society, the Danube Delta National Institute for Research and Development and photographers Sebastian Bugariu, Daniel Petrescu, Stelian Porojnicu for the documentary support granted in the creation of this postage stamp issue. 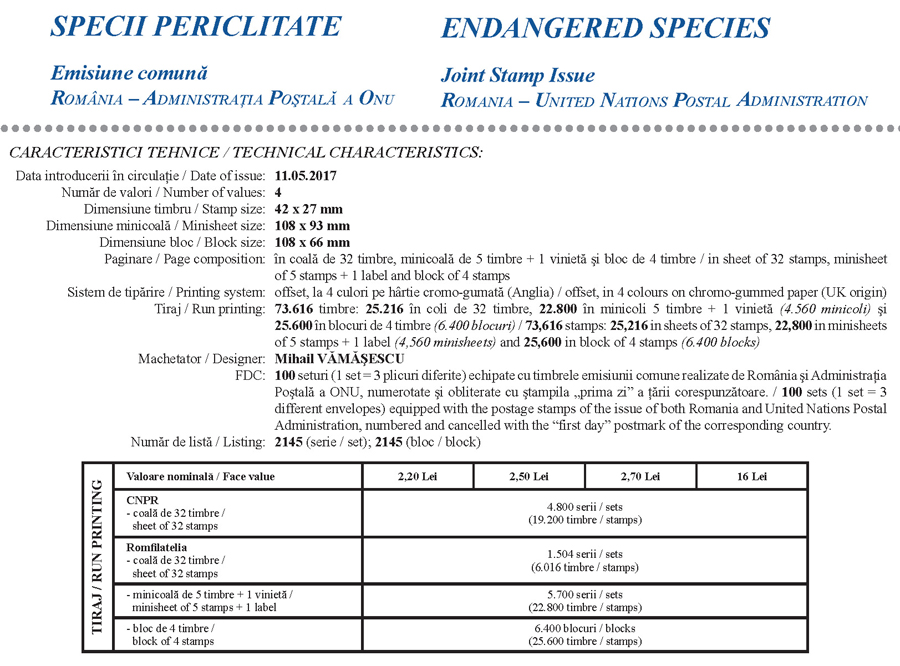