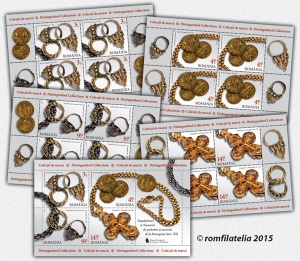 Romfilatelia invites you to rediscover the beauty and craftsmanship of the pieces of treasure belonging to the heritage of Dinogetia, which are part of the National Museum of Romanian History, thus making a short incursion into the world of the 10th – 11th centuries. All this, under the title of Distinguished collections.
On the postage stamps of the issue are illustrated jewels and coins found at Dinogetia, one of the important settlements of the Lower Danube. Along the 11th century, the region knew a flourishing development, also highlighted by the archeological excavations.
During the archaeological research of 1950, the reliquary cross was discovered. Later on, also in Dinogetia, a treasure of jewels and coins was discovered in 1954; it includes several pieces decorated with filigree and granulation. Discovered in a hole, assigned to a house that apparently belonged to a rich weaver, according to an inventory revealing, the treasure consisted of ornaments (two silver bracelets, gilded silver earrings, two gold circles, a gold ring, and three silver rings), various objects (slate spindles and iron knife) and eleven coins (seven coins made out of gold and four made out of silver) issued between 976 and 1059. With analogies both within the Byzantine Empire and beyond, the pieces of jewellery belonging to this treasure suggest different poses of the art of precious metals from Dinogetia, at the northern frontier of the Empire.
The apogee of the Byzantine Empire spans since the mid-10th century until the second half of the 11th century, an era in which its authority was equally recognized by its allies and accepted by its enemies. The Lower Danube Region was organised into several administrative units, among which the longest lasting was the Paradounavon province.
The first three stamps of the issue illustrate jewels and coins which belong to the treasure discovered in 1954.
The stamp with the face value of lei 3.00 illustrates two rings, one gilded silver, one gold, and a golden link.
The first ring has a broad circumference with the bezel shaped like a dome, with its surface covered in granulation grouped in triangular sectors, the base being marked by a frame made of small metallic spheres.
The second gold ring has heightened bezel that suggests the silhouette of a building with several floors, columns and a dome. The piece provides another illustration of decorative techniques – filigree and granulation- also found on the engolpion from Dinogetia: we can see the simple gold wires, twisted or braided, as well as the grains spread on the surface, grouped or attached in isolated positions. Initially, the sumptuous appearance of the ring was completed by the ornamental stones encrusted in the cells that can be seen on the circumference of the bezel, placed in the opening of the arches.
The link was crafted by twisting three gold wires, two of them simple and thicker, and the other one twisted and thinner.
The stamp with the face value of lei 4.50 illustrates from the composition of the treasure, three gold coins issued between 976 and 1025. Two are depicted on the obverse, on these the bust of Christ can be noticed, bearded, with nimbus cross around His head, with His right hand raised in a blessing and the Gospel in His left. The third coin is depicted on the reverse, with the busts of emperors Vasile II on the left and Constantine VIII on the right, wearing ceremonial robes specific to the Byzantine area and both supporting, with their right hand, a long patriarchal cross, represented on the central axis of the piece.
The stamp with the face value lei 9.10 illustrates a gold link and a silver ring.
The link takes the form of an open loop with sharp ends, slightly overlapping, made by combining three gold wires.
The silver ring has a similar silhouette of the gilded silver one, with a wide circumference, a dome-shaped bezel with the surface covered with granulation grouped into triangular sectors, the base being marked by a frame consisting of small metal spheres.
The stamp with the face value of lei 14.50 illustrates the reliquary cross from Dinogetia, discovered during the archaeological research of 1950. A Latin-shaped cross, with slightly flared arms and rounded at the ends, the cross appears as a box composed of two halves jointed longitudinally by means of two hinges. Inside is kept a fragment of fine silk, wrapping a small relic.
The cross has a length of 7.85 cm, a width of 6.30 cm and, together with the chain, a weight of 77.27 g.
In a broader sense, the Engolpion is an object having been conferred apotropaic powers (designed as protection from evil spirits), being worn suspended from the neck, on the chest.

Romfilatelia thanks the National Museum of Romanian History for their documentary support granted in the achievement of this postage stamp issue. 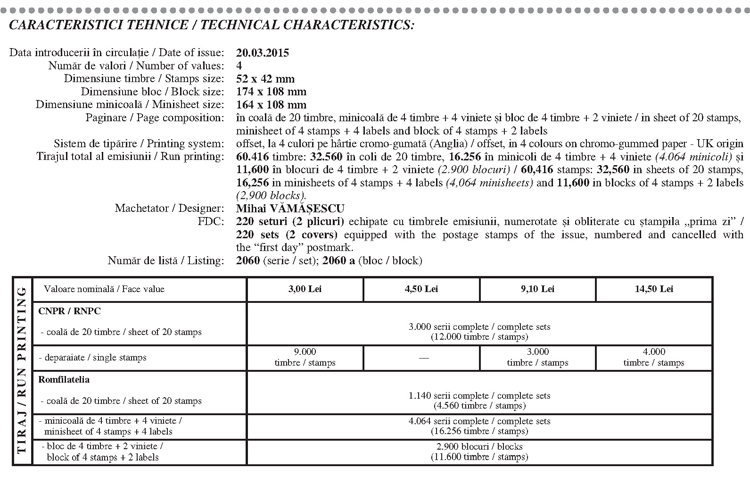