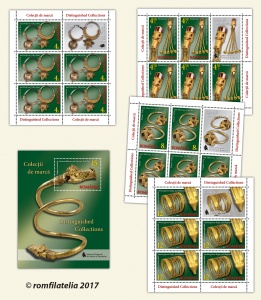 As British writer Aldous Huxley said, “Beauty is worse than wine, it intoxicates both the holder and beholder”, and the beauty and splendor that jewelry displays are undeniable.

Romfilatelia explores the fascinating field of jewelry through the postage stamp issue Distinguished Collections. Much like stamps, with their small dimensions, jewellery can have unimagined values and are the product of careful and scrupulous works of creation.

Ornaments have always been part of human culture, as a universal form of adornment. Jewellery made from shells, stone and bone survives from prehistoric times. It is likely that from an early date it was worn as a protection from the dangers of life or as a mark of status or rank.

In the ancient world the discovery of how to work metals was an important stage in the development of the art of jewellery. Over time, metalworking techniques became more sophisticated and decoration more intricate.

Gold, a rare and highly valued material, was buried with the dead so as to accompany its owner into the afterlife. Much archaeological jewellery comes from tombs and hoards. Sometimes, it appears people may have followed a ritual for the disposal of jewellery.

Wearing earrings was considered by anthropologists a form of sympathetic magic, having the meaning of insuring protection, health and prosperity for the wearer.

The stamp with the face value of Lei 4 has as its subject two earrings (7th century AD), discovered at Cosoveni, Dolj county. Although not part of the same pair, both earrings were created from gilded silver, using the same techniques of pouring, beating, granulation, melding and guiding.

Discovered in the princely tombs of Apahida, Cluj county, the bell pendants (5th century AD) ennoble the stamp with the face value of Lei 4.50. They are made of gold and garnets, and each one has an animal head, crowned with a prism with garnet faces. The bells are attached by thin gold chains.

The pair of earrings represented on the stamp with the face value of Lei 8 was discovered in a grave in Velt village, Sibiu county. Created in the 5th century AD, they illustrate a more elaborate craftsmanship, the pendants of the earrings having fourteen sides, ornamented with triangular or square garnets. The pattern is further adorned with a gold pearl thread that surrounds each of the square garnets and the hole where the earring loop meets the pendant.

The stamp with the face value of Lei 12 illustrates a multi-spiral bracelet from Sarmizegetusa Regia, Hunedoara country.

Estimated to be from the 1st century BC, this gold bracelet, executed by beating, punching and engraving techniques, weighs nearly one kilogram. The heads are represented by stylized snakes, the flattened parts being decorated with the fir tree motif and a medial line of golden pearls.

The souvenir sheet of the issue presents a tubular bracelet, discovered in the hoard of Cucuteni-Baiceni, Iasi county, on the stamp with the face value of Lei 15. The 4th century BC bracelet is gold, worked in the form of a spiral with heads formed from a protome (animal-shaped figure forming an ornament on a metallic or ceramic object) in the form of a ram’s head.

All illustrated pieces are part of the heritage of the National Museum of Romanian History.With all the advancements of the metal and gem processing art, the purpose of wearing jewellery always remained the same, they enabled wearer to express himself non-verbally, showcase wealth, social status, political and religious affiliation or affections toward someone.This enabled jewellery to become timeless and a target for constant development and refinement.

Romfilatelia thanks the National Museum of Romanian History for the documentary support given for the creation of this postage stamp issue. 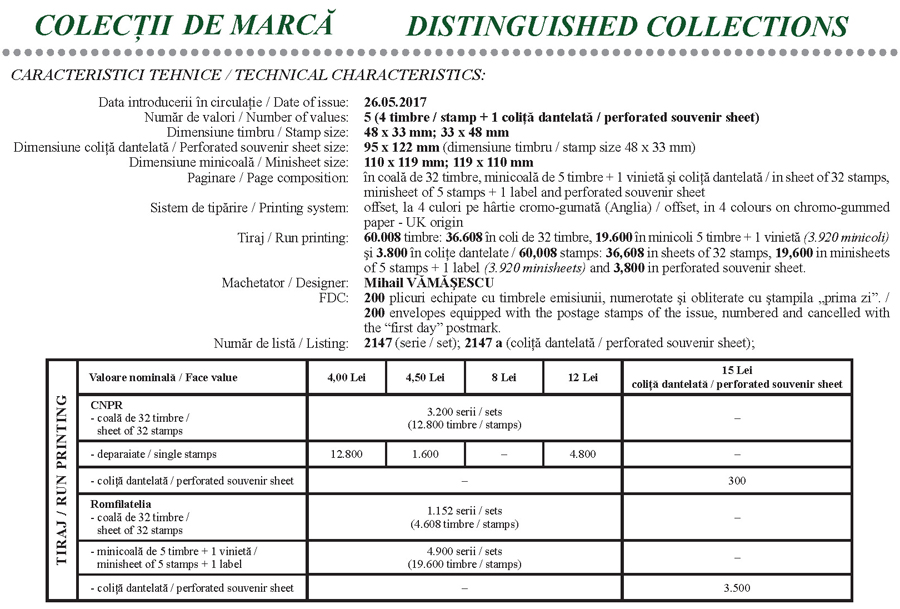