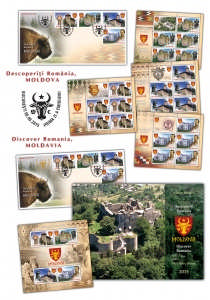 Continuing the invitation launched two years ago, that of discovering Romanian regions through postage stamps, miniature art objects, in 2015 Romfilatelia adds to this project another two philatelic thematic issues.

Moldavia is the latest region completing the complex project of promoting the national heritage, developed under the name of Discover Romania, but also the place where 157 years ago the first Romanian postage stamp issue appeared.

The philatelic issue Discover Romania, Moldavia presents a unique land in Romania, where the rich history, traditions, natural and architectural sights, but especially the hospitality of its people captivate worldwide travelers in visiting these wonderful places.

As the other postage stamp issues entered in this project, the stamps dedicated to Moldavia illustrate representative monuments, symbols and personalities of this area.

The Neamt Fortress and the portrait of Stephen the Great are represented on the stamp with the face value of
lei 3.60. The ruler’s name is closely linked to that of the Neamt Fortress (also known in chronicles as the Neamtului Fortress) that is part of the medieval monuments of exceptional value in Romania. Although the fortress was built in the late 14th century by Peter I, it was only fortified in the 15th century under the reign of Stephen the Great, as part of the larger system of fortifications built in Moldavia.

The stamp with the face value of lei 6.00 reproduces the portrait of metropolitan Dosoftei of Moldavia and the image of St. Nicholas Princely Church, one of the most imposing places of worship in the city of Iasi. In the second half of the 17th century, for a period of several years (1677-1682), the St. Nicholas Princely Church served as a Metropolitan Cathedral and became a source of Romanian culture. Dimitrie Barila, known by his monastic name as the Metropolitan Dosoftei, was one of the most gifted men of culture of his time, translating and printing in Romanian numerous books and thus becoming a founder of the Romanian language in worship of the Church of Moldavia.

The stamp with the face value of lei 9.10 is dedicated to the Alexandru Ioan Cuza Palace from Ruginoasa and to the ruler Al. I. Cuza. A central character in the Union of the Romanian Principalities, Al. I. Cuza manifested a strong impetus to renew the country by European standards, an effort that was also seen in the Ruginoasa estate.
The ”Alexandru Ioan Cuza” Palace in Ruginoasa was officially inaugurated in April 1864, becoming a summer residence. Although the ruler spent little time in the palace, his wife, Elena Cuza, lived there, taking care of the palace’s interior and exterior renovations.

The four stamps are completed by a first day cover, and as page composition were used the sheet of 32 stamps,
the minisheet of 5 stamps + 1 label and the block of 4 stamps (in philatelic album).

The special product of the issue is the philatelic album, created into a limited run printing of 245 pieces and equipped with the block of stamps and the first day cover, cancelled with the „first day” postmark clearly imprinted in gold foiling. Both products are numbered from 001 to 245.

Starting with Tuesday, September 8th, 2015, the postage stamp issue Discover Romania, Moldavia will be available in all Romfilatelia shops in Bucharest and countrywide.

Romfilatelia thanks the Moldavian National Museum Complex (the Al. I. Cuza Palace from Ruginoasa), the Neamt Municipal Museum Complex (the Cucuteni Eneolithic Art Museum and the Neamt Fortress Museum), Vanatori Neamt Nature Park, as well as the photographers George Avanu and Constantin Dina for the support granted in the achievement of this postage stamp issue.