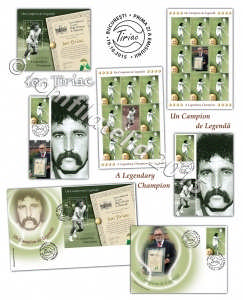 Peter O’Toole’s quote – “I will not be an ordinary man, because I have the right to be extraordinary” – can easily exemplify the choice of Romfilatelia’s latest philatelic issue’s topic, as the project is dedicated to a great Romanian sportsman, a champion whose motivation had no boundaries and whose dedication created legends. Having the title, Ion Tiriac, A Legendary Champion, the postage stamp issue will be available for purchase in Romfilatelia’s shops in Bucharest, Bacau, Brasov, Cluj-Napoca, Iasi and Timisoara starting with Friday, October 16th, 2015.

Passion, desire, aspiration and motivation are some of the elements characterizing his carreer,
Ion Tiriac winning over 40 titles in renowned international competitions, where he raised the art of tennis at the highest levels, both technically and in terms of the public spectacle.

A set of 2 first day covers completes the philatelic issue, one equipped with the postage stamp of the issue, the other with the souvenir sheet, both models being numbered and cancelled with the “first day” postmark. Also, a set of 2 maxicards depicting the former tennis player is available.
As page composition were used the sheet of 32 stamps, the perforated souvenir sheet and the minisheet of 8 stamps + 1 label (2 models).